If you had asked me two years ago to define the characteristic that separated a multiplayer shooter from a massively multiplayer online role playing game, I probably wouldn’t have had much of a problem. However, now that I’ve seen MAG in action, I haven’t the faintest idea how to make that distinction, and I’m not quite certain the difference even exists anymore.

When MAG first debuted on the scene back at E3 2008, it appeared under the title of MAG: Massive Action Game, and even though the latter half of the title has been dropped (thank god), it still completely lives up to that lofty adjective. MAG is truly “massive.” 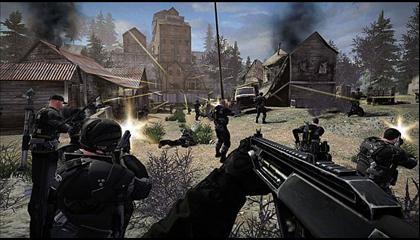 Perhaps MAG‘s greatest strength and greatest weakness is that actually playing the game isn’t very much different than playing your everyday 16-player multiplayer match. It’s extremely well executed, and very fun, but it’s essentially not very different. This is a great thing because it allows players to enjoy themselves without having to be burdened by the huge amount of other goings-on across the rest of the battlefield.

But it’s also a crippling fault in some respects. Unless you’re playing as a higher ranking officer (which only a handful out of the 256 players will be) you’ll be playing a grunt soldier who plays similarly to other multiplayer FPSs. If you’re one of those people, you may find yourself saying, “sure this is impressive, but what’s the difference? Who cares if it’s 256 players when I’ll only ever even see 50 or so.”

MAG asks that you be a little bit philosophical when playing your FPS, so as to keep in mind how cool it is that this entire war is being waged by real people. While it may not ever really affect you, the concept is not without merit.

That said, the base game is still remarkably well executed, and is every bit as competent as other major online first person shooters like Battlefield and Call of Duty. This is a big budget title that lavishes detail and care on every section of the game. Even in the early build that we played, the game was extremely well polished, despite being nearly 8 months pre-release.

One of my personal favorite aspects of the game thus far is the attitude that Zipper Interactive is taking towards differing player styles. We talked with a developer on the game as we played through a match (interestingly, they had to have the entire team playing from home because there wasn’t enough room on the show floor to have an entire game full of show attendees) and he explained to us that people who choose to complete objectives and work as a team player will be rewarded for their efforts and team-mindedness. However, they still want players to be able to go off and have their own kind of fun. So if you wander off and slaughter tons of enemies and do things on your own, you’ll also be rewarded.

TGR’s Editor in Chief, John Laster, and I both exhibited these differences with startling clarity in our matches. While I was more of a team player, riding along with other players completing objectives in a vehicle, John preferred to set up his gigantic turret gun hidden behind a bush and mow down players as they came around a corner. Russ Phillips, the Art Director on MAG just laughed and told us that both styles were perfectly acceptable ways to play the game.

We both came away extremely impressed by our play time with MAG, and are equally as excited to get our hands on the finished product. But we won’t have to wait long. We were told that Zipper is planning a public beta for the game to launch in the coming months. Though those plans may be amended now that MAG has been delayed into 2010.