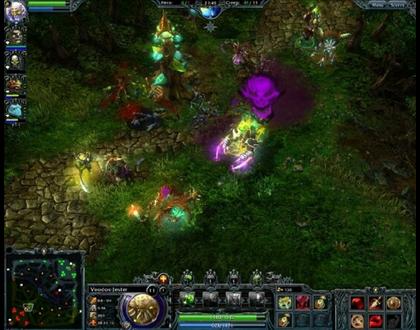 Indie developer S2 Games of Savage fame have rather sneakily announced their third project via the wonders of social networking site Facebook, Heroes of Newerth. It’s a curious approach that is only afforded only by their indie status, but it’s certainly getting the job done as tens of thousands of fans have already been lured in. The game has been lingering in closed beta for a couple of months now, and after finally acquiring a closed beta key, I thought it’s about time I got stuck in on the action.

Heroes of Newerth is unashamedly based on the real-time strategy spin-off and all round supermod Defense of the Ancients. For the uninitiated, DotA started off as just another custom map for Warcraft III. It eventually went on to become as popular as its host game, and to this day is only really rivaled in the mod world by Counter-Strike in terms of sheer popularity. It even had a pop song devoted to it which, even more surprisingly, actually sold very well in some northern European countries.

S2 thought they’d go a step further and devote a whole stand alone game to the DotA phenomenon, recruiting the talents of the mod’s current developer/caretaker Icefrog to help things along. Their goal? To take the core ‘RTS simplified’ formula of DotA and free it from the reigns of the now-aging Warcraft engine, bringing it to a whole new market in the process.

As I navigated the well crafted menus and server browser before finding my way into my first match, I was greeted with a sense of familiarity: the trusty UI, the visual style and the nigh-legendary map all faithfully recreated. Even my chosen character, Moon Queen, is an unabashed remake – dare I say copy paste – of DotA’s Luna Moonfang.

But once over that fact, it’s apparent that there is more to HoN than meets the eye. While they’ve got a lot to thank their forebearers for, it’s clear that S2 have worked hard to retain the same balancing act of matches. This is by no means an easy feat considering the number of characters on offer, many of which have been finely tuned. They’ve even thrown a half dozen of their own entirely new characters into the mix–such as the Puppet Master and the Electrician–and these seem to slot into place nicely.

All this comes wrapped in a surprisingly polished exterior, with a snappy, intuitive backend for finding, creating and joining matches, chatting, meeting up with friends or even making clans. The in game graphics are reminiscent – perhaps even representative – of the Warcraft III engine, but with S2’s own take on the character models and bold, often impressive spell effects. There is also a neat feature that allows disconnected players to rejoin a game within an allotted timeframe, helping address a longstanding gripe that has been a bugbear of many the DotA player.

S2 have got an unenviable job ahead of them, with a world of expectation and a real wall to climb if they are to please the DoTA hardcore. But early indications are good, as they have shown that they have a real appreciation for the source material; a quality they would do well to capitalize on if HoN is to succeed. If they can produce the same bite sized, pick up and play feel that popularized DotA in an accessible package more suited to the mass market, then they may well be on to a winner with Heroes of Newerth.

Heroes of Newerth should hit PCs this Fall.