Are games art? Art games are? Gavin takes some time out in the arthouse to investigate.

What makes a video game what it is? What makes art what it is? Can either of these things be quantified and turned into a digestible, definable explanation? Or are both questions answered only subjectively, purely open to our own interpretation?

The only thing we all know is that Roger Ebert must be an idiot.

When it comes to discussing video games as an art form, things admittedly get kind of murky. Yes, somebody with at least two brain cells and a basic understanding of how culture has evolved wouldn’t be dumb enough to flatly discount video games as an artistic entertainment medium. But what exactly it takes to make games considered art is an entirely different can of Warhol soup. If someone writes a play, it’s considered art. If someone gets a bunch of people together and shoots a movie, it’s art. So shouldn’t any game with a plotline considered as artistic expression? A game contains music, art design, animation, and story. Even the most hardened critic would acknowledge the artistic merit of those elements in their individual forms, but somehow when a controller gets plugged in, the overall product becomes inferior. But that’s generally only to people for who, for whatever reason are so out of touch with gaming that they don’t understand the increasing legitimacy of the medium.

The difficulty lies in the differences between video game art, an artistic video game, and a so-called traditional gaming experience. Video game art can be loosely classified as using an existing video game and its mechanics to create an artistic expression. Machinima would be an example. It also helps to show how broadly video games can be used in other facets of art. Joseph DeLappe’s "dead-in-Iraq" performance piece uses the game American’s Army as a platform for him to juxtapose the United States Army’s contentious use of the video game as a virtual recruitment tool for the harsh realities of the current way. In the piece, Joseph recites all 4300+ American war deaths that have occurred in various servers across the game. Here the video game is being used to demonstrate differences between the virtual world and the real world.

Invaders was understanbly controversial, but isn’t art supposed to be?

It also isn’t uncommon for video games to be used in a highly modified form as a piece of installation art. One of the most recent, and most volatile examples was Invaders! Douglas Stanley referenced the classic game Space Invaders in a critical commentary on America’s global strategy during the Bush administration. His installation featured attempts to save the World Trade Center towers from the familiar space invaders, but these attempts were always futile. Next to the screen was a loop of various American movies with xenophobic slants, interposed with shots of President George W. Bush in publicity shots. The point he was trying to make wasn’t entirely subtle, but it was art.

Both of these examples were accepted by the art world – at the least as art, anyway. But here the video game was simply being used as a tool for already accepted artistic statements. Even music has begun to experiment with the use of synthesized video games sounds, as evidenced in the rise of chiptune, a musical genre based entirely around console sound chips.

Roger Ebert, the man who put forward this debate two years ago with his incredibly well-formed and knowledgeable opinion, claimed that games aren’t and never will be art. He eventually made his reasoning known, namely that since video games are controlled by the user then they remove the artists control and are therefore no longer art."Art is created by an artist. If you change it, you become the artist" was his exact quote. Two years on and that still strikes me as a poorly considered opinion on not just video games but art in general. Clive Barker attempted to point out the fallacy in an elderly movie critic analyzing an art form that is half his age, but it fell on deaf ears. The point of the matter is, regardless of whether the user can change the outcome of the game, it doesn’t change the fact that someone had to write, script, program, animate, design, score, and produce that outcome for the player to accomplish it. A choose-your-own-adventure story is still a story.

Braid is often hailed as the most art-like game of recent times.

Gamers also deserve some recognition for their ability to accept games with artistic natures. While movies just seem to keep getting less original and more idiotic, video games continue to evolve. While a game with an artistic style is something different to an art- game, games like Shadow of the Colossus, Okami, and Braid still do well enough within the gaming community – critically, at least – to show that people support artistic sensibilities and originality. While none of these titles sold as much as, say, Halo 3 or GTA IV, they still had large swatches of the community abuzz. Contrastingly, it isn’t hard to imagine how a movie with those same artistic sensibilities would hold up in a box office battle against a Kangaroo Jack sequel or a mindless remake. But put Ico up against gaming’s equivalents and the average gamer is still probably going to be more receptive to the former than the latter. Obviously this is just speculation, and it would be interesting to see a real study on which group is more accepting of artistic and abstract concepts. Looking at the rise in appreciation, play, and discussion of almost entirely conceptual and artistic games in the blogosphere and forums, and it seems as if gaming is beginning to outpace more traditional artistic expression.

Still, it does seem that there is a divide regards critical success and monetary success. While games like Shadow of the Colossus did incredibly well, nearly selling a million copies, other titles that were acclaimed didn’t do quite as well. Okami, despite selling 200,000 units, hasn’t been deemed lucrative enough to deserve a sequel. But this divide can also work in the opposite direction, as indie game Blueberry Garden proved; It was a quirky game in which eating seeds and fruits changes the world around players in order to help them to their goals. Sadly, it was given a lukewarm reception by critics. That didn’t stop it from winning the Grand Prize at this year’s Independent Games Festival against some incredibly tough competition, and gain media spotlight by doing so.

While games with a heavily artistic style do well with gamers, games that strive to be purely art have yet to show whether or not they can be accepted by major companies and be economically viable. Companies have only recently began to experiment with releasing these types of titles. With the PlayStation 3 release of Jenova Chen’s Flower, and Steam’s embracing of highly abstract titles like The Path, shows that companies may be ready to embrace fresh, experimental approaches. In the case of Flower, Chen’s previous release flOw reached 600,000 downloads, so making the decision to give a commercial release to the follow-up may not have been a stretch for Sony

In the case of The Path, however, its commercial release is an entirely interesting matter. The Path is an art game in every sense of the word and, to this humble author, is made up of all the elements of an arthouse game. On the surface The Path seems like a simple, albeit incredibly dark, retelling of Little Red Riding Hood in a modern setting. From the start you are forced to combat your knowledge of conventional gameplay in order to complete goals that you aren’t even entirely aware of. As you peel away the layers you realize you are playing a game that is using itself to make you think about the journey through life. The first, and only, rule the game gives you is to stay on the path at all costs, but that simply gives you failure. You have to break the rule to gain any of the characters’ endings, and trust me, those endings are pretty bleak.

While The Path is a dark game that uses its theme to produce an introspective analysis of life, it also isn’t the only game that uses unconventional ways within its gameplay in order to produce an emotional reaction. Seven Minutes is a platformer that only rewards you with the “good ending” when you apply nihilism to the gameplay, and even the incredibly incendiary Super Columbine Massacre RPG explored way the media sensationalized that sad incident and the role video games played associated with it. This is the largest difference between a game with artistic aesthetics and an artistic game. These games, and others like them, manipulate gaming conventions in order to reach the designer’s artistic vision and illicit the responses they desire. In this way they are no different than any other piece of art. 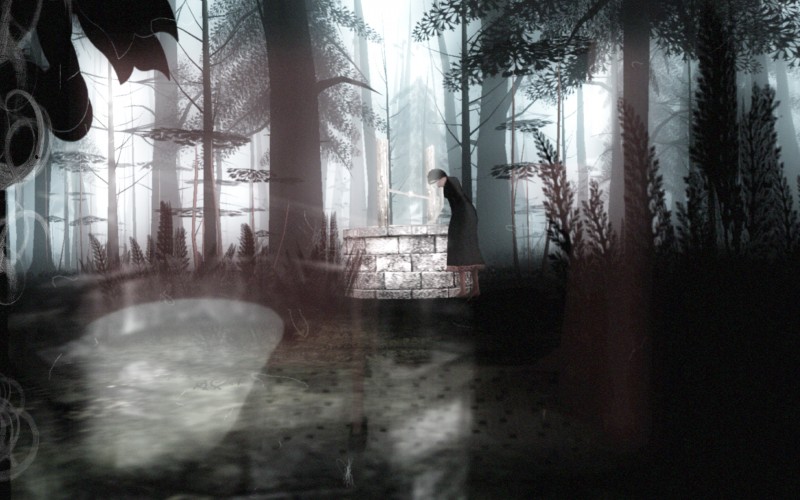 The Path earned mixed reviews, but certainly got people talking

As developers get braver, and the genre grows and matures, there will be more opportunities for art games to find footholds in the minds and plans of major companies. The critical success of many of the experimental games, and the acceptance of games like Flower, Braid, and The Path by major companies, is a start. Realistically, outside of a game of this nature somehow selling a million copies, the best fans of the genre can hope for is elements being slowly taken into major releases. Street Fighter IV used visual cues from Okami, Rule of Rose addressed some dark themes involving how children can view adults, and Team Ico continues to push the boundaries of emotional interaction while blurring the line between art and entertainment. As long as we stay open-minded and receptive to this new artist, the game developer, we will continue to be rewarded with and challenged by emotionally complex and engaging titles.

It is either that or everything degrades to the gaming equivalent of Step Up 2: Back to the Streets. But, then again, at least Roger Ebert considers that art.