The weather that November night wasn’t prohibitively cold – one of the few benefits to living in Texas. For the curious, the others are Tex-Mex and inordinately large belt buckles. Once I’d removed the guitar and game from the oversized Guitar Hero box, I opened the balcony sliding door of my college dorm room. The weather provided me with a convenient excuse; I really wanted to advertise my new plastic axe. As the game booted, I wondered if Guitar Hero would finally crack the Western music game market. I’d played Konami’s Guitar Freaks before, so holding embarrassing, chintzy plastic wasn’t a new experience. Licensed music was the only real difference between the two, and would ultimately distinguish Guitar Hero to the Western market, but would it be enough? In retrospect, I’d answered my own question within minutes, as after creating my band I scrolled directly to Smoke on the Water and experienced the Next Big Thing. 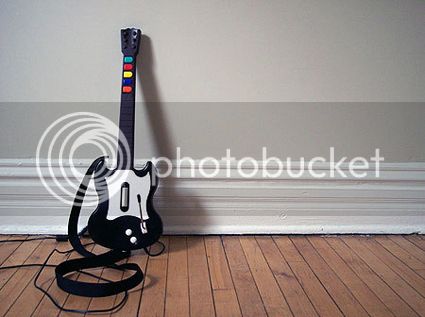 The first of many plastic peripherals to clutter my apartment. Those were simpler times.

Guitar Hero and eventually Rock Band went on to answer that question in ways more substantial than one college-age nerd’s song selections. The two properties are arguably gaming’s biggest, earning more than $3 billion between them. Konami’s music series had always done well enough in Japan, but it relied on original music created by in-house musicians. Sure, the occasional licensed track or cover would trickle along, but these were viewed more as pathetic marketing ploys than legitimate choices when scrolling the song list. A player earned scoffs and eye rolls from the arcade’s quarter line if they picked anything by a real band over an intentionally manic, complex Konami original.

As it turns out, licensed music holds far more weight than challenging note charts to the general public. The reason is obvious, at least when considering those that spend less than two hours a day on message boards. Video games sell a fantasy, and hammering out that awesome riff in Smoke on the Water is much more ubiquitous than thrashing out overtly complex yet unknown melodies.Guitar Hero provided a new way for people to interact with their favorite tunes, supplying them with an anchor of familiarity along with a promise of vicarious digital fulfillment.

It’s strange to think back to those days of progeny, given that licensed music is now a foregone conclusion. There was a time when labels didn’t want their music in games. The original Guitar Hero relied on uncanny sound-a-likes. The first master-track songs were genuine novelties. Marketing taglines have since morphed to promising that all tracks are master before dropping entirely due to deprecation. It only took a few sales spikes to assuage label’s and artist’s apprehension. Now sales of songs have tripled and even increased tenfold after appearing in Guitar Hero.

"Who needs these things anymore, have you seen what nerds spend on music games?!"

Now the beggar has become the chooser; everyone wants their music in Guitar Hero or Rock Band. I’d be lying if I said seeing the tables turned didn’t fill me with smug pride, given how the music industry can be, delicately put, dickbags. The demand for entry into this new medium (and all the revenue it entails) has increased such that Harmonix will soon release the Rock Band Network, a series of tools that will allow anyone to publish their material for consumption through the Rock Band platform. The industry’s embrace of music game nascence has come full circle as well. Pearl Jam is launching their next album simultaneously in the real world and in Rock Band, and The Beatles: Rock Band will be launched alongside a complete reissue of The Beatles remastered catalogue. These are shocking steps from an industry that not four years ago restricted game makers to using cover bands, and still runs scared like a caveman seeing his shadow for the first time when digital music distribution is mentioned.

While the access to material is fantastic, the legitimacy it implies is even better. Anyone that’s viewed YouTube comments on a music game video, summoned the courage to try DDR in public, or even passed by a Guitar Hero demo unit in an electronics store has heard the disparage. "Play a real instrument," the insulter levies, with scalable vehemence and grammatical correctness. The evolution of licensed music in video games gives all early adopters the ammunition to say ‘I told you so’. With the full blessing of musicians, labels, and most shockingly of all Apple Corps, these goofy little games have earned a benediction that even the most bitter condescensionist can’t ignore.