We’re introducing a new feature under the working title of Retrodotal, where writers reflect on their favorite, most memorable moments in gaming. In this opening feature, Jeffrey Matulef reminisces on his attempt to cram the last few moments of Okami into the last few hours of Summer. 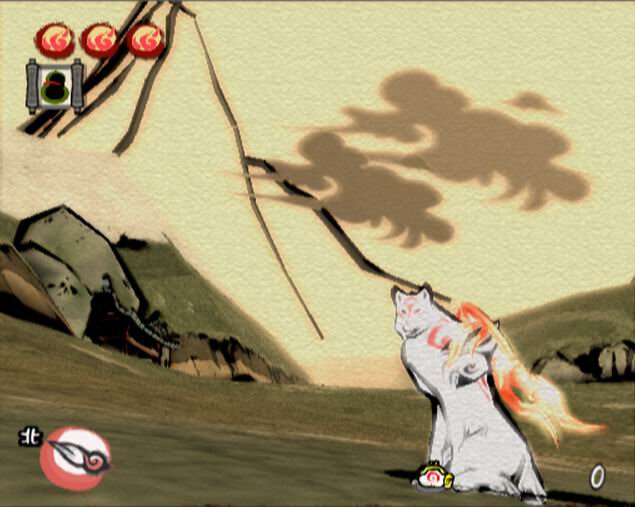 Okami’s unusual visuals are still beautiful years after its release

"It’s like someone read my mind for what would make a perfect video game, and then made it." So said a younger, longer-haired Jeffrey Matulef in the autumn of 2006. That’s how I felt when I first played Okami. Though I don’t know if the word "played" does it justice; more like when I absorbed, consumed, and experienced Okami.

The Legend of Zelda has always been my favorite long-running game franchise, so the idea of a Zelda clone by Hideki Kamiya (Devil May Cry, Viewtiful Joe) that looked as good as Okami did was enough to launch it straight to the top of my most anticipated games ever list. I knew it would look great, and I knew it would play great, but I wasn’t exactly holding my breath on it having an interesting story or well-written script. Much to my surprise, and eternal delight it did. The story was still your basic tale of good versus evil, albeit with a Princess Mononoke-esque environmental message about replenishing nature. But the characters were complex and interesting, with developer Clover side-stepping the disconnect I usually get with silent protagonists by making Ameterasu a wolf goddess. It was a fantastic way of explaining why she’s smarter than most, yet cannot communicate with people. There’s even glimpses of how she looks from other people’s perspectives where her ethereal decorative wounds are invisible.

So enamored was I with Okami that while I wanted nothing more than to continue playing it non-stop, I also didn’t want it to end. At the same time, I had less than two weeks to beat the game prior to the start of the Fall term, knowing once that happened, I’d have practically no time to game. As a result, I’d made a concerted effort to time it right so I’d beat it just as summer vacation would come to a close.

For the most part, this wasn’t very hard. It may seem odd to look back upon now, but at the time, I had no real interest in writing about games for a living. As such, I didn’t want to become too obsessive about my gaming habits as I felt like it was unproductive regards my then professional aspirations. Games were just a hobby to me like comic books and movies; entertaining, moving, artistic, but I didn’t want them taking over my life. I made sure to take frequent breaks, read books, enjoy the outdoors. In essence, live the life of a college student in his early 20s.

Of course, Okami was so goddamned fantastic that my real life to Okami ratio was skewing towards the latter, and I found myself getting ahead of schedule. After roughly 42 hours gameplay I made it to Oni Island, what I presumed to be Ametarsu’s last stand, all with four whole days of summer left. I decided to use that borrowed time to go back and plunge the game’s depths, searching for secrets and enjoying the afterglow. But just as I was getting ready to complete my journey, something terrible happened; I came down with flu.

Sure, I could’ve pressed on. But this was Okami, perhaps the greatest game I’d ever played. I wanted nothing to detract from my experience, and its all-important ending in particular. I would’ve hated for my final thoughts upon completion to be "hurry up credits, roll faster. My head hurts and I need to lie down". I needed time. I needed to be in good health so that when I finally finished it I could truly bask in the loving embrace of Okami‘s conclusion.

Sadly I didn’t recover until the last day of summer vacation. I figured now was the time to kill off Okami‘s final few hours. What better note to end my summer break on than to experience my new favorite game’s swan song? With that mindset, I booted up my PlayStation 2 for what I thought would be my last play session in my virgin run-through of Okami.

I completed Oni Island after my initial estimate of two or so hours. After beating Nine Tails, a giant celestial fox goddess that emerged from the heavens, I figured that would be it. But wait! There’s more! The game hadn’t ended and there was still a greater evil to be foiled. I thought there may just be one more final boss to defeat. Pressing on, I realized that was not the case. Rather, there was a whole giant area of the map that I hadn’t been to yet, complete with its own quests, side-quests, and dungeons. Maybe I should’ve stopped. But I was bound by my own ridiculous determination. I had to beat this thing before my classes started in the upcoming morning.

I had to finish Okami. This was my time.

So I played for four hour stretches at a time, resting only to prevent headaches resulting from staring at the screen too long. The game constantly teased me, like it was right on the cusp of ending, forcing me to press on. On that fateful day, I experienced: stunning new locales, a surreal time-traveling sequence to earlier events in the game, the discovery of Issun’s hometown, yet another dungeon, interesting revelations about Waka, the mysterious prophet, the discovery of an ark from the heavens, and one of the most touching post-credit sequences I had ever seen.

I wasn’t much a binge gamer; my previous record for a day’s worth of gaming would’ve been no more than eight, maybe nine hours. So imagine my surprise when I looked at the game clock and realized I’d been playing for nearly 13 hours that day. It’s truly a testament to Clover that, even after 45 hours into the game, they’d somehow made the final dozen hours as fresh, unique, and moving as the first dozen. So when the end credits finally rolled around 4 in the morning, I knew it had been a last day of summer well spent.

I’ve never been good at goodbyes. Even after 56 hours, I was sad when Okami ended. I wasn’t sure when lightning like this would strike again. Even the forthcoming Twilight Princess looked like a wannabe Okami, right down to Link’s transformation into a wolf. Though I was glad to have completed my goal and live in a universe in which Okami exists, I was still sad that I could never experience this game again for the first time.

In retrospect, my relationship with Okami was more infatuation than true love. The design wasn’t as tight as that of Zelda‘s, the puzzles too simple, the collectibles too useless, and the script too rambly. But it’s easy to get cynical over what a game doesn’t do. What Okami did was to look gorgeous, control well, tell a deceptively complex story, and innovate with its brush mechanics. More to the point, it was more than the sum of its parts. The hand-painted look of the game, the celestial brush controls, and the tale of a goddess reborn all complimented each other in creating the most wondrous virtual world ever committed to a disc.

I often complain that games are too long. It’s a rare thing indeed when even after hitting the 40 hour mark, I’m still compelled to binge on a game like I’ve never binged before. Okami was the beautiful exception. Nothing since has even come close to matching the last few hours of that beautiful summer.