There are two types of boxing video games. Firstly, there are titles which eschew realism to be as ‘fun’ as possible – see Punch-Out!!, Facebreaker, and Wii Sports. Secondly, there are simulations which attempt to generate entertainment by keeping everything as realistic as possible. EA’s Fight Night games not only fall into the latter category, they define it. Fight Night Round 4 is no exception.

From the outset, Fight Night Round 4 is a lesson in beautiful presentation. The game leads a new player straight into a tutorial before giving a glimpse of the main menu. This tutorial gently breaks the player into a control scheme to which even series veterans will need adjustment. The main menu offers the usual game modes and multiplayer options. Selecting any of these introduces a character roster second to none, allowing boxing fanatics’ fulfillment of seeing Mike Tyson going toe-to-toe with Muhammad Ali.

The single player campaign is Legacy Mode, where players can choose one of 48 famous boxers or design a custom one and take him all the way through a decade-spanning career. While players have control over the minutiae of their avatar’s progression, doing so requires a highly complex menu system which is cumbersome to navigate.

The first thing noticeable as the boxers enter the ring are the glorious visuals. Punching never looked so visceral and terrifyingly realistic. Well-timed uppercuts see the opponent’s flesh ripple as flecks of sweat and blood fly across the ring. For my money, Fight Night Round 4 is the most realistic looking game of this generation, with stunningly accurate character models. The first time a four punch combination lands, sending a nemesis to the canvas in slow motion, feels primal and thrilling. This is only amplified seconds later, as the player gets to watch him doing his best Bambi On Ice impression in a desperate attempt to get to his feet before the ten count.

All of this and the game runs smoothly at sixty frames per second, keeping game play fluid. One of the harsher criticisms of Round 3 was that it could feel slow at times. EA has addressed this in the sequel, with faster and tighter fighting. 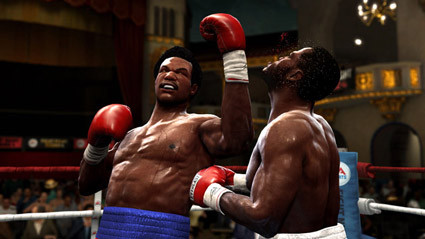 The Total Punch Control scheme has caused controversy. The left stick is used for movement, the shoulder buttons for defensive and offensive modifiers, and the right stick controls all punching for both hands. Initially it all feels counter-intuitive, especially considering one must push the stick away from the opponent to punch with the left hand. With every punch requiring different flicks and sweeps of the right stick, reliably pulling off the right type of punch proved difficult.

Then it all clicked. A few fights into the campaign, the control system worked with rather than against me, and my on-screen avatar moved, weaved, and pummeled exactly as I wanted him to. With hindsight and experience, there’s never been a truer translation of the movement and precision of a boxer onto a controller. I can’t imagine playing the game any other way now. After a surge of complaints suggesting Total Punch Control was too difficult, EA released a patch mapping punches to the four buttons on the front of the pad. Players of Fight Night Round 4 should give the original twin stick layout a fair try before considering changing, though I expect traditional controls will be the easier option for some. 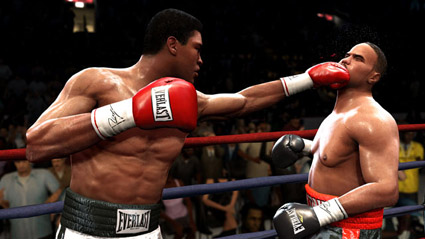 The simulation doesn’t stop with graphics or controls. Players are expected to carefully monitor their health and stamina levels at all times. Initially, I just went swinging in with heavy punches. Because of inept opponents, I got away with it. As soon as I encountered intelligent opposition, I found that charging in not only left me over-exposed to counter-punching, but also quickly drained my stamina, weakening punches later on. This is an extension of the simulation experience EA is keen to foster with this game. 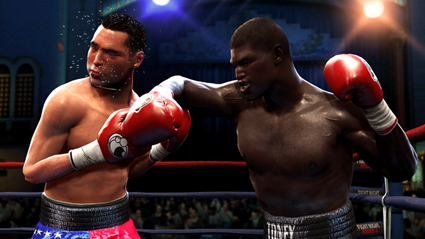 Here lies the ultimate paradox with Fight Night Round 4. The feeling of the game, the way it looks, and the inspired control scheme all contribute to an unparalleled package of realistic game play. Round 4 is as close to boxing reality as games have achieved to date. That’s great, because I wouldn’t actually want to step into a ring with Tyson (I suspect I’d on the wrong end of a beating). While a superb experience, EA focused too closely on making a simulation at the expense of fun. This dedication to realism leaves Fight Night Round 4 a great boxing game, but just shy of a classic.