Cleopatra falls into a weird category – a game that probably appeals to some group of people, but won’t to most. As a virtual slots game, there has to be a group of people excited to gamble away digital coin, but the remainder of us will have no problem letting this one pass by.

The clean and simplistic design of Cleopatra lends to the casual gambler. Upon booting the game, the player is presented with two modes: Instant Play and Tournament Mode. The interface is covered in Egyptian décor, and carries that theme throughout the game. The visuals have a slick polish and resemble the almost-intrusive flashiness of an actual casino machine.

Cleopatra’s Instant Play mode offers 3000 credits and play until said credits expire. Being a casino game, the odds are in clearly in the game’s favor, so running out of chips inevitably happens in time. There’s no skill involved, aside from determining the number of lines to play or the amount of the bet; it’s entirely a game of chance. What’s more, it’s a complicated slot machine in comparison to the typical 777 style. The machine is constructed with 3 separate rows with 5 columns each, giving 15 faces in total. Like a real slot machine, you can bet multiple lines of any combination of rows, and up to 5 credits per line on each spin. I don’t know the best strategy, so I usually go balls-out and hope for the best.

Tournament mode plays differently, and just might have some strategy behind it. Similar to Instant Play, the mode provides 3000 credits at the get go. Every credit earned goes into a score bank that cannot be accessed. That means players have a finite number of spins and must bet wisely. I’m still convinced that it’s based on luck, but perhaps there’s strategy that goes into betting. Once the 3000 is squandered, players can submit their winnings to an online leaderboard where some disturbingly high scores reside. 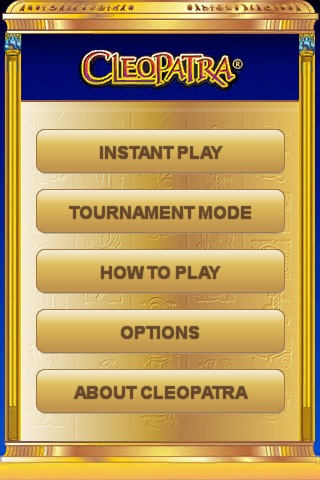 Cleopatra is targeted at a specific audience, and the developers realized that. The “How to Play” is vague, offering no strategy. That gives me the idea that those playing this game will already know what they’re doing. While I’m not personally on board for this Egyptian coin ride, that doesn’t mean no one out there is.