Do you like to kill digital aliens? Of course of you do. From early starts like [i]Space Invaders[i] and Zack McCracken and the Alien Mindbenders to modern examples like Prey and Half Life 2, battling invasive aliens and their machinations is a gaming pastime. Even though hostile extraterrestrials are getting theirs with games like Destroy All Humans!, Chillingo and Game Factor keep the tradition alive with Inkvaders for the iPod Touch and iPhone.

Inkvaders is as simple in story as its predecessors. Aliens invade and the player, with a dramatically bestubbled hero, must fight off the hordes with a variety of weapons fueled by energy, bullets, and various high explosives. To keep up with the rush of enemies, players need money, and there’s a variety of ways to get the necessary dosh. Killing aliens nets money and gems of varying worth float about in the air. Netting money in a hurry is easy, especially when using a Rush Box, which sends numerous aliens from both sides in a rapid-fire kill-fest. This cash is necessary, because additional supplies and upgraded firearms cost a lot of money. 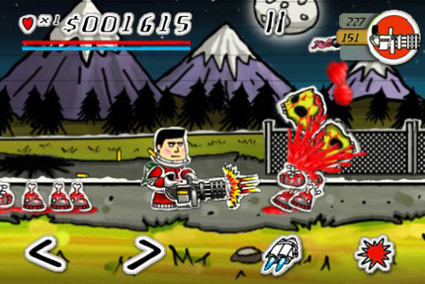 The visuals are very impressive. The whole game looks like a child’s sticker book, in a good way. Everything from the aliens to the anonymous hero to the background environments have a white outline, as if cut out and pasted to the screen. This sticker book feel is reinforced by the switching animation between maps, levels, and game modes, done by a giant hand peeling away the current page. There’s also a line of steel rings across the top of the screen, as if it’s a page from a notebook. The game’s a gigantic doodle. The very adult levels of violence depart from the otherwise childish atmosphere. Think South Park – anyone that can handle that will be fine here.

The audio offers a commendable performance, mostly in the Foley department. The background activity features exploding structures, startled disappearing cows, and many other aggressive alien phenomena. The rest of the sound consists of the firing of the weapon of choice, gory sounds of alien death, and teleportation beams used by the aliens. The game’s music is the most interesting, and not just because of the sci fi background music. Players can substitute music stored on the iPod for the music being currently played. More games should do this. Usually I have to hum “Welcome To The Jungle” instead, and it’s not the same.

In the technical and game play aspects, Inkvaders holds up well. However, there are a few issues with it that may upset some gamers. Firstly, the levels are repetitive; each stage is the same format the last, with only varying backgrounds to mark the progress. Ten levels across three stages turn this into a Sloppy Joe buffet – good at the start, but too filling too soon. Also, and this amazes me, there is no save feature or manual. Closing out the game forces a complete restart. The game’s repetitive nature and the lack of a save feature is, sadly, where this game falls down on the job. 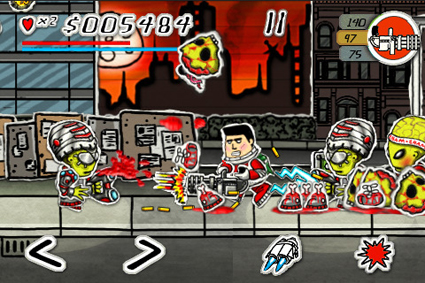 However, this game is not bad. The graphics are cute, clever, and well created. The audio is solid, and the ability to play one’s own music is a neat feature. I found it difficult to unglue myself from its straightforward gameplay, even though the elitist gamer side of my personality said that I ought to be bored. I ignored this and handily enjoyed myself. That is the best recommendation for any game in my book. Plus, it only costs one dollar. It’s impossible to feel on the short end of a deal at that price.

In the end, this game is a mixed bag with good graphics, solid level construction and controls, and an interesting audio feature that allows players to tailor the soundtrack. However, the identical sameness of the levels and the lack of a save feature is both tedious and mystifying.