Besides obviously being a social menace and devourer of souls, television has always acted as a kind of cultural barometer, its broadcasts mirroring the trends and preoccupations of the societies tuning in to them. As television has become more widespread through more channels, services and broadcast hours, its cultural net has widened too. TV has become more open to coverage of new phenomena and social developments – technologies, fads, hobbies and so on.

Video games unquestionably represent one of the biggest sociological and cultural trends of the modern era, and one that continues to emerge. Already, since its comparatively recent birth in the 1970s, gaming’s unique level of interactivity has lead to it making a major impact on the developed world’s general consciousness, particularly on young people. Surely, then, the up-to-date people behind the creation of television media would have made coverage of video games a top priority? 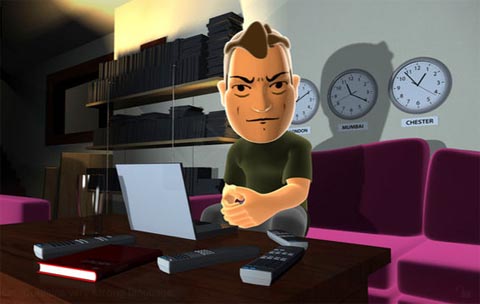 In the UK, the recent broadcast of Gameswipe on digital channel BBC Four was a pretty major event for those interested in gaming. Presented with the razor wit of Charlie Brooker, the one-off show was an oddity: an entire programme dedicated to video games, aired on British national television – on the BBC, no less! Whilst British TV has covered gaming in the past, notably on 90s cheat-packed shows like GamesMaster, modern-day coverage of gaming remains an extremely niche market as far as TV executives seem to be concerned. This is despite the continued and explosive national growth of games’ popularity and profitability, with the non-gamer increasingly becoming a rarity. Indeed, one odd factor of note is that the Wii and Nintendo DS, popularisers of games to those who were previously uninterested in gaming, rely heavily on TV advertising for their success. Yet, despite this willingness of games companies to use TV, there seems to be no enthusiasm coming in the other direction.

Gameswipe’s apparent success offers an opportunity to reassess games on television. After all, the show was actually as much about gaming on television as it was about gaming itself. It included clips of the likes of GamesMaster, as well as ones of more mainstream science offered disdainful outlook on the worth of the medium. In the show’s introduction, Brooker also offered an explanation as to why games rarely feature on TV, suggesting that gaming is still seen as a sedentary, mind-rotting activity pursued only by emotionally and sexually inexperienced loners. Whilst it’s true that such perceptions probably still exist among some of those behind the TV shows we watch, it doesn’t go all the way to explaining why TV appears to shun our past-time, nor does it excuse what is ultimately a failure to give the audience what they want.

Of course, the situation isn’t the same everywhere. There’s games-mad South Korea, a country which has not one but two channels dedicated to showing competitive play of games like the infamous, classic strategy game Starcraft. South Korea is home to a very different society, and various well-documented aspects of it can help to explain why gaming is more commonly found on its TV than they are on TV in the UK. For example, South Korea is fortunate enough to have one of the fastest and most widespread broadband distribution in the world; its is an extremely affluent, and moreover extremely high-tech society. This clearly has helped gaming, and competitive multiplayer gaming in particular, become increasingly ingrained into its society. As such, South Korean TV networks have chosen to cash in on gaming’s popularity over there.

Quite surprisingly, one of the South Korean networks showing Starcraft games is also covering Halo Wars.

But the UK also has strong Internet uptake, its population tech-savvy in general, albeit to a lesser extent than South Koreans. So, is there a magic ingredient which makes the difference? Is it the level of ardent gaming fandom, the differently organised TV networks, or some other factor? Whatever the answer, no Western nation is suddenly going to turn into South Korea, or Japan, or anywhere else for that matter. As fans already consider whether Gameswipe could return as a full-length series, the real issues surrounding gaming on TV are just two in number. Firstly, is there a really a lack of TV programmes on video games, and if so why? Secondly, what does the future hold for such afflicted areas?

Gaming a massive cultural phenomenon, a new, high-tech and innovative entertainment medium which has apparently overtaken the film business in profitability. Nobody’s claiming that TV is democratic, but it is usually commercial and it’s missing out on a huge market There are millions of gamers out there who would lap up quality programmes on their cherished past-time, but TV networks have largely failed to meet this demand, sabotaging their own potential for advertising revenue. Capitalism, as they say, is blind. Even besides this commercial angle, there’s the argument that TV is meant to (at least some of the time) provide some kind of service to its viewers. This is certainly true of the BBC, instructed by its charter to “represent the UK” and to “stimulate creativity and cultural excellence”, not to mention funded by its audience through its license fee. Maybe Gameswipe will instigate the Beeb realizing that games are as capable of “cultural excellence” as any other medium. At the very least surely the BBC should make some effort to “represent” the millions of gamers who pay the license fees like everyone else?

In countries where there isn’t a broadcaster with such responsibilities, gaming reaching TV will rely more heavily on commercial considerations. How likely this is to happen will depend on how the industry develops from this point. As it continues to grow, it seems inevitable that the commercial opportunities that will be presented to the TV moguls will give gaming better representation on the TV screen; if the dream of intelligent, probing but entertaining games comes true, then we can reasonably hope for attention from public broadcasting as well as the money men.

So what do we have a right to hope for? Maybe some shows about gaming’s rich history, like a docu-drama based on Kushner’s book about Carmack, Romero and Doom? Maybe gaming panel shows, where panellists discuss and joke about the week’s handheld releases – or even a serious prime-time discussion show, where those big releases are dissected by a selection of knowledgeable games journos? Some of these ideas may sound derivative or a bit tragic, but arguably they’re all real possibilities. And if they do sound silly, then remember that perceptions can and have changed over time, evidenced by seeing other media and cultural fixtures eventually getting their break on TV. Even more crazily, games could become suddenly hip to the mainstream media, and their positive effects on IQ, health and human wellbeing could be shouted from the rooftops every night. One day, games could be cool – that’d be a turn up for the books, no?