What do you get when you mix real-time strategy, hack-and-slash action, role-playing game-style leveling, and spell casting? The answer is Brütal Legend, a game seemingly no one knows how to play. That includes its creator, Tim Schafer, who admitted that even he is constantly surprised by the new strategies players are coming up with.

This seems to imply that the game has untold depth and strategy, the two things one looks for in an RTS. Yet critical praise was muted, with complaints suggesting that its RTS elements didn’t fit, were too confusing or simply plain boring. Even I, in my otherwise glowing review of Brütal Legend, cited this element as the game’s greatest sticking point. Since its befuddling reception, Schafer has stated that Brütal Legend is not, as some would imply, an RTS: "For people who are open to new kinds of action gameplay experiences, they are in fact the core of what makes Brütal Legend a fun game experience and unlike any other." 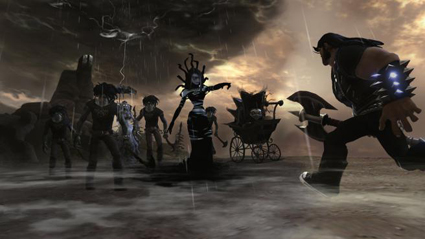 Did Schafer backtrack in his statements after Brütal Legend’s release?

Is this a case of Schafer mixing together so many genres that no one quite knows how to approach it, or a case of broken game design where he tries to cover his tracks under the guise of suggesting that players aren’t keeping an open mind?

What Schafer says makes sense insofar as his not incorporating standard RTS controls because he didn’t want it to be played like a standard RTS. "Some people find it hard to split up the army and give individual orders to individual troops. This is kinda true, mostly because you shouldn’t be doing it!" he’s acknowledged. The game has its own unique rule set so he figured people would adapt to it, not playing it like StarCraft or Overlord but like something different, something individual. Sadly, they didn’t.

But is that their fault? If Schafer’s diatribe is true, the game does a terrible job of explaining itself. While the game does teach you how to do double-team attacks, that was during the tutorial section when the game still felt like it was going to be a hack-and-slash. Once you throw in a couple dozen other units and resource management, all bets are off. During my play through, I felt so small in the battlefield that I wouldn’t have thought I could make much difference turning the tide of battle.

What I’d forgotten about was the guitar solos; the ever present, ridiculously strong magical attacks you can use. But wait, wasn’t the whole point that roadies are silent and near invisible, that while they do most of the legwork you never know they’re there? Isn’t that why it’s an RTS (or a hybrid of with strong RTS elements) in the first place? You set up the armies, but stay out of the spotlight, right? But now we’re told that you’re supposed to be present center stage. Feels like mixed metaphors to me.

Maybe this is missing the point. Maybe it’s not an RTS because it’s not technically strategy, and maybe we’re not supposed to plan things because the battles are too complex to guarantee the desired outcome. They’re not entirely random, but you can only turn the tide so much. You are but a cog in the greater machine of war. If it’s as random as that, then perhaps mastery is not the goal. Maybe we’re not supposed to play it to get better at it, but rather to struggle through and endure it. Maybe it’s not the destination that counts, it’s the journey.

This is where I should take a stance as to whether or not the game succeeds in its goal. So, at this point, I’m going to throw my arms up and admit no clue. But isn’t that what art should be? It’s abstract, open-ended, and clearly not for everyone, but it doesn’t have to be.

Brütal Legend certainly doesn’t play it safe with its unique blend of genres. While I took issue with its RTS elements, I’m glad they’re there. Maybe I’ve just not come to grips with its unusual mechanics, or maybe it’s broken, or maybe it’s deliberately chaotic. That’s anyone’s guess, but either way I’m having fun trying to work out its alien ways. The cynic in me says that perhaps they function as a cautionary tale. I prefer to believe that we, as gamers, can appreciate a game for taking risks and being unlike anything before it.