In the last edition of Challenging Conventions, I wrote about a game that mixed and matched genres questionably. This time I’m talking about a game that combines genres more gracefully way, and that game is Uncharted 2: Among Thieves.

At its core, none of Uncharted 2’s gameplay styles are unique. Its cover shooting is reminiscent of Gears of War, its vertical cover of Infamous, and its exploration-based puzzle solving of Tomb Raider. Even its most distinctive set piece, a combat-free stroll through a village, has its rooting firmly in role-playing games where you explore a town and talk to everyone in it. What makes Uncharted 2 unique is how it paces its combination of all these elements, making it what a real adventure should be: unpredictable and thrilling.

Combining various genres in an action adventure game is nothing new. Batman: Arkham Asylum did that very thing only a couple months prior; switching styles between brawler, stealth, and Metroid-like exploration. Though, that game did so at a very predictable pace; the player was never doing one of these styles for more than 15 minutes before the gameplay switched up. The first Uncharted also followed this formula, only teasing notions of platforming and puzzle solving, yet lacking the conviction to fully develop any of these styles. Maybe there was fear of turning players off from the third-person shooting, which was the meat of that game. Uncharted 2, however, takes a major risk by switching up gameplay styles less frequently and expanding each set piece to its full potential.

"That was one hell of a train ride!"

There’s a series of sequences where you go from one kill room (area that must be cleared of enemies) to another. Just when this starts to get old, you’re thrown into an epic sequence on a moving train. The restrictive carriages change the way you play, then you hop from the train’s interior to its exterior, trying to get the drop on your enemies. It’s a rollercoaster, so much so that while you’re still killing dudes it feels different enough to make for an exhilarating change of pace.

Shortly thereafter, just as you need a moment of respite from all the shooting, the game strips you of your weapons and sends you to a gorgeous, quiet village. All you can do is look around and interact with villagers, shaking their hands, playing with children, and petting their yaks (as you do – Ed). The sequence makes for a brilliant breather, as does the hour plus after it of platforming and puzzling that’s combat free. By the time baddies show up again, you’ve forgotten that the game even had shooting in the first place.

The developer, Naughty Dog, took a big risk in assuming players would have the patience to go that long without combat, but it’s a risk that pays off. While shooting is the core of Uncharted 2, I’d hardly call it a shooter, simply because it spends so much time making players do other things.

The cut scenes are worth mentioning too. They’re used liberally throughout, most lasting two to five minutes, and feel well paced. Primarily, they add a lot of character development and often signify the start of a new set piece. For example, there’s a scene where the returning Elena’s accompanying cameraman, Jeff, has been wounded in a gunfight. She’s determined to stay behind and help him, whereas Drake’s new partner, Chloe, feels he’s a lost cause and that they should push on without him. Drake sides with Elena, deciding he needs to help, and Chloe abandons the party while the rest must press on. What follows is a scene where Drake holds Jeff up on his shoulder, greatly hindering Drake’s movement, while they desperately follow Elena to safety. While this scene could have been handled via in-game banter, it would have been easy to miss a character’s reaction to these events. These are important because they add an extra layer of tension and urgency when you get control back, making you determined to save Jeff and prove Chloe wrong. 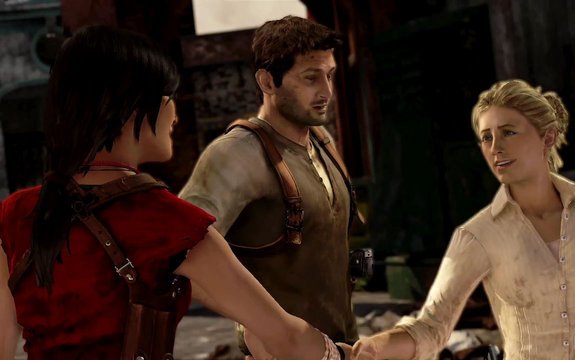 All smiles at first but things turn sour between Nathan’s ladies, and quickly.

One of the reasons the pacing is so superb is the game’s wonderfully versatile engine. While most games are content to just be a shooter with light puzzle solving (Gears of War) or a platformer with light combat (Tomb Raider), Uncharted 2 proves it can do shooting and platforming just as impressively as its competition. While the puzzles are kept simple to help with the pacing, the potential is there for something more complex if the designers ever decide to go down that route. Then there’s stealth, an element completely absent from the original Uncharted, and handled well in its successor. Most impressively, the game essentially recreates the most exciting sequence from Wet, a car chase where you hop from vehicle to vehicle, destroying all around you. Yet it does it without resorting to a quick time event, Wet’s easy way out. All this variety was achieved without radically altering control schemes between gameplay styles; each gameplay switch feels completely natural.

Uncharted 2 balances so many gameplay styles so gracefully because of the developer’s confidence in each one. Naughty Dog has made an adventure made up of several different components, but they’ve kept intact the most thrilling element of any adventure: surprise. By not warning you what style of game you’re going to be playing at any moment, Uncharted 2 consistently surprises more than just about any game this year.