I’m here talking with a computer enthusiast who loves counterstrike, counterstrike and well, counterstrike. He’s working on his degree while serving as IT Support at a high school, please welcome Chris Grasty! 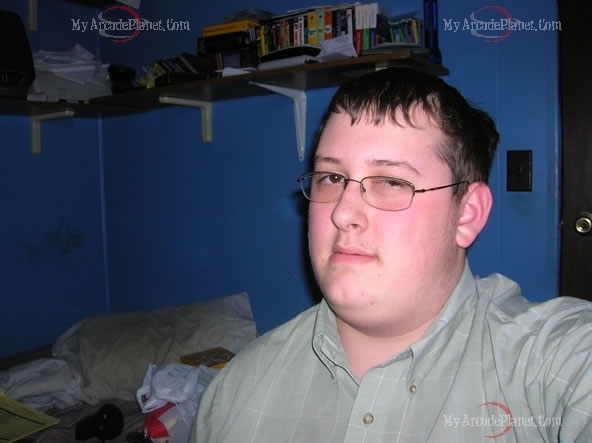 Tell us a little about yourself?

My name is Chris Grasty, I am 20 Years old. I am an IT Support Tech for a high school in Zion, IL. I was a technician for 4 years in the same high school as a student and worked my way from cleaning the shop to working on servers and switches.

It’s always nice to work your way up to the top from the ground up. So how long have you been gaming?

Mostly shooter games and then arcade games and card games.

Seems to be a popular mix right there; what’s you favorite game? (Please draw us a picture of it using paint)
Counter-Strike (the picture is attached)

I know a lot of pc gamers who would testify to that. What’s your favorite aspect to thegamereviews.com?

The discussions. I was an admin for a gaming/military site ( www.oxy-moron.net) and MAP is pretty much everything oxy wished it was. (oh and you miss spelled arcade ….)

Fixed the spelling mistake, hey it’s not like it my job to edit things; well maybe… I hope we can keep up some of these discussions. Why did you pick your screenname/gamertag?

I chose [_(((___#2 PENCIL__)> because a friend of mine had the name ()___CRAYOLA___(> and thought it would be cool if I did something similar, he stopped playing CS and I have been using the name ever since.

Wow, honestly that is pretty cool. But I prefer pens to pencils. Do you have any hobbies?

Mostly computers and repairing them. That and Counter-Strike pretty much sums up everything I do in my free time.

So you’re basically a general computer lover; well what type of music do you like?

I can definitely agree with that. What’s the worst food you’ve ever eaten?

Head Cheese (I worked in a Deli) it is the most disgusting thing I have ever seen or eaten.

Head Cheese? Hmmmm, I’ll make sure to avoid it like I avoid doing actual work. If they made a movie about your life who should play you?

Book????? What the hell is a Book???? Seriously, I recently discovered that I have not completed a book since kindergarten, and that was Dr. Seuss.
I love Dr. Seuss, that man was brilliant. I always tell my lit teacher my favorite is Where’s Waldo, just to attempt to be funny. What celebrity would make the worst roommate?

I can think of so many names right now. Probably anyone who is less lazy than me.

Anyone less lazy? If you could have any superpower what would it be?

The ability to shoot laser beams from my eyes, I know some people I would like to test it on.

Let me know when you get it… I’ll give you my list. What do you see yourself doing in ten years?

Hopefully being able to look at the wall of my awesome office at whatever awesome job I will be at looking at my College Degree.

Yep, I know the feeling. Do you have anything else to add our readers might find interesting?

This must be one of those questions that signify you have run out of questions and are grasping at straws to come up with more.
……….
You seem to have pierced through my shield of ineptitude and diversion. In essence I did just want 15 questions… Thank you very much for your time, Chris Grasty every one.