Splinter Cell is one of the most famous stealth-action games of our time. This latest addition to the series proudly sports a few training missions, a fairly long and addicting campaign, and an online multiplayer mode. The two training missions teach you the basics of the Splinter Cell series. The campaign’s addicting game play is brought on by intense moments where you don’t know what might happen next. The multiplayer features a variety of maps. The goal of the game is to find one of four data hubs, and start collecting data via your hacking device. Once you have downloaded a file, you return to your base, and you finish half of the objectives. The other half is to repeat what I have stated. Some points in the game will have you begging for more, but some moments in the game may drive your sanity into the ground.

When you first pop Splinter Cell into your console, it will bring up a lovely menu (Exciting, no?) You’ll have the option to jump into a refreshing multiplayer match. That is of course, if you can find one. Lately, I’ve found the online community to be lacking. But when you do find a match, it turns out to be a great time. The unlockables include new costumes, and other miscellaneous items. If you’re in the mood to learn the story, head into the campaign zone. Where you can either start where you left off, start a new campaign, or start some basic training (If you are new to Splinter Cell, play the training, it makes the game SO much easier) When you finish your first mission of the campaign, you’ll get the basics of how things work. You go stealth through a mission, sometimes even killing a person or two. At the end of the mission, once you’ve finished with all of your objectives, you’ll be asked to go to a certain location for extraction. Once you are finished you’ll be greeted with an achievement for beating the level and a stat page. The stat pages lists the basics of your mission (i.e. How many people you killed, how many times were you spotted, how long you took to beat the mission). Once you have gone through your stats, the game will bring you to the equipment page. You unlock equipment every time you complete a mission objective that has a star next to it, if you beat the mission with that objective complete; you get a piece of equipment unlocked. Overall, the menus are easy to navigate, and the post-game stats are easy to view.

Splinter Cells graphics are wonderful. They truly get the job done for this type of game. The face animations and body in the game, which is an absolute necessity for the game, are spectacular. The lighting, which is another important part of Splinter Cell, is great. The environment looks superb, and the pop-out menus (i.e. hacking, pick-locking) are nicely, yet not overly detailed. Water could use another layer of shine, but that is just my opinion. Other than that, the graphics are superb. 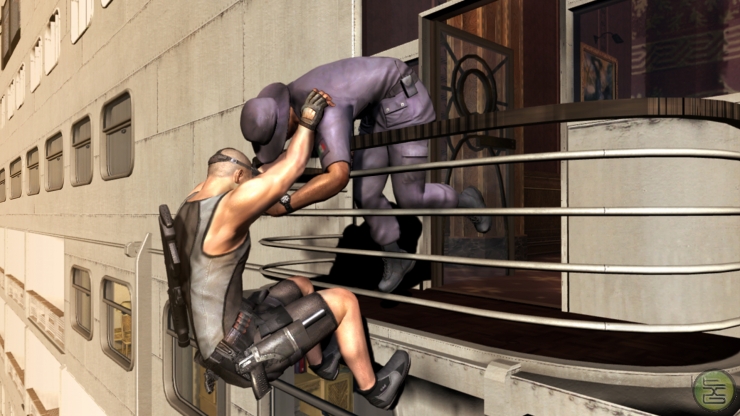 The game did not fully focus on stealth, but it’s still present in the gamplay.

The bad guy is creeping upon your hiding spot, you’re about to be discovered. But what is this? No dramatic music to emphasize that you’re about to be caught? Not cool! Good thing Splinter Cell has this stuff, or your career as an agent would end rather quickly. The music can be a good sign on when to move, or when it is time to stay put. For example, you’re doing your spy business when someone walks in the room. The music may switch to something more dramatic, this alerts you to the enemies’ presence. Gunfire and explosions also make up a bit of the detail in sound. Whether it is the “puff puff puff” of a silenced machine gun, the “Bang!” of a flash bang, or just that dramatic music at the right time, Ubisoft nailed the sounds and music down perfectly.

Splinter Cell provides the gamer with a unique gaming experience. It is not about running around and shooting people, in fact, it is the opposite of that. You’re mission, if you choose to accept it, is to complete missions quickly and silently, without risking your identity as a double agent. The game involves using different strategies to do different things. Such as using access point A, or point B. It also includes finding ways of doing things without being spotted. Anything you would consider illegal would probably highlight you to all of the AI in the game. Such as pulling out a gun and shooting people. That would be a real attraction getter and will have guys with loaded machine guns coming at you in no time at all. Also, the use of your equipment is also considered illegal. The game also uses a degree of acrobatics. You don’t get to scale up giant towers or anything, but you do get to scale down one! Also, if you get into the position of risking your presence, you have the opportunity to either quickly end a person’s life, or just strangle them into unconsciousness. Every situation is different, adapt, and live. 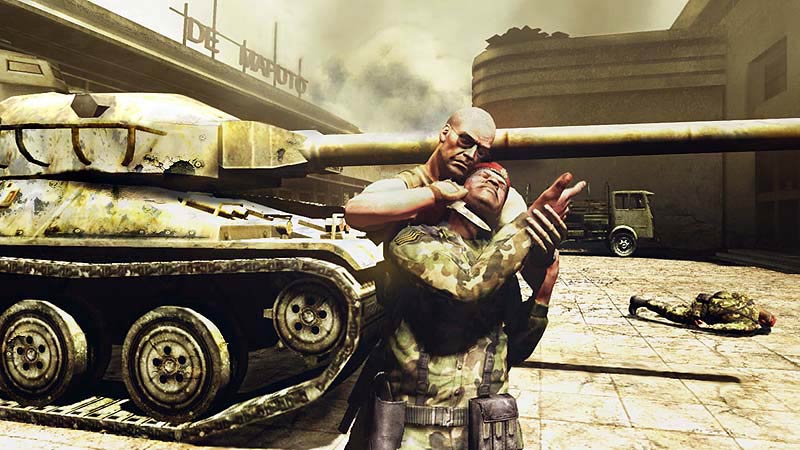 You will encounter intense battles, with beautiful explosions and environments.

While it seems the game is somewhat different each time, the game usually loses its flavor after its second passing. All I can say about this part is, make every minute count, and make sure you have the time to explore as much as you can.

Splinter Cell, a great game! Being one of the only stealth games on the Xbox, it has a unique aura that makes it attractive. Its replay value may be lacking, but its great gameplay will undoubtedly make for a great experience the first and second time around. With the combined effects of its sound, graphics and gameplay, it makes Splinter Cell one of the cunning edge games that I’ve ever played. Right now, if you haven’t already, I recommend that you go out and rent this game, if you like it, wonderful. You can purchase Splinter Cell for around $30. If you’re unsure on whether to purchase this game or not, just look at the above. This game is still one of my favorites to this day, and I look forward to playing any future Splinter Cell games. I hope you enjoy this game as much as I do.