Capcom has spent the past month filling in the holes of Resident Evil 5, with the mid-February release of Lost in Nightmares and several costume packs keeping veteran zombie hunters busy. The second and final downloadable mission, Desperate Escape, has finally landed on Xbox Live and PSN, giving survival horror fans yet another reason to lace up their Burton boots and prep their green herbs.

Once freed from Wesker’s mind-control at the end of RE5, Jill Valentine urges Sheva and Chris to go after him. The pair reluctantly agrees, leaving Jill behind to fend for herself. This is where Desperate Escape picks up, as BSAA agent Josh Stone quickly finds the unconscious Jill and teams up with her to battle through the masses of murderous undead. It’s here that players can step into the shoes of either combatant as they attempt to regroup with Chris and Sheva, though an endless mob of violent “sick people” stand between them and the happy reunion. Lock and load.

Lost in Nightmares took gamers back to the roots of Resident Evil. It was an exercise of crank turning and emblem collecting, focusing more on puzzles than zombies. Desperate Escape gets back to the action. While this pack doesn’t introduce any new weapons or monsters, the developers throw the book at you otherwise. Players start off loaded with weapons, and the stages are littered with ammunition, grenades, emblems and other gibbing goods. There’s no opportunity to horde equipment in Desperate Escape, as staying alive and blasting away are the primary concerns as waves of blood-thirsty villagers and axe-wielding monsters head in your direction. 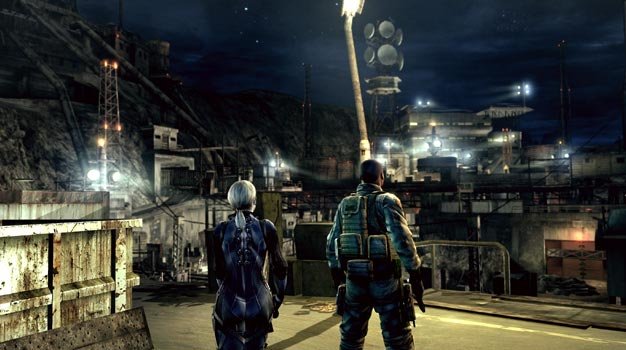 I really can’t stress how much action has been packed into Desperate Escape. Players will need to make use of their entire arsenal – shotguns, pistols, knives, grenades, rocket launchers, red barrels, and even artillery barrages – to reach the epic finale. The climax plays like a modified version of the popular Mercenaries mode, asking players to stay alive on a small rooftop as they wait for a helicopter. Since this rooftop is apparently a hangout for all of Resident Evil 5’s mini-bosses, it ends up being a heart-pounding exercise. Be sure to bring your A game, or you’ll have to invest in a new controller. Or two.

There is very little story in either DLC pack, but Desperate Escape does offer a different angle to what players had previously seen. While it only takes an hour to blow through, the pack unlocks Josh Stone and Rebecca Chambers in the Mercenaries Reunion mode, adding a little extra value for the $5 price tag.

While it’s odd that the design behind Lost in Nightmares and Desperate Escape is so divergent, fans of both action and puzzle-solving each have a pack for them. Those who pine for the return of sluggish zombies, limited ammo, and unusual puzzles would feel right at home in Lost in Nightmares, but gamers with itchy (and tasty) trigger fingers will have a blast with Desperate Escape.