Very British Gamer is a monthly column by TGR editorial and features director Sinan Kubba, and it takes a look at games from the spiffy perspective of a gamer from across the pond. Tally-ho and all that.

I’ve revisited Tim Moore’s Do Not Pass Go recently. It’s an entertaining travelogue of London which as the title suggests incorporates Monopoly. Moore explores the history of each of the board’s locations along the route, memorably early on opting to play a round of Monopoly with a Brazilian-born transvestite hooker he encounters in King’s Cross – as you do.

I find it weird that there are non-London-based versions of the Monopoly board out there, versions that others regard as the de facto standard. London and its locales so steeped in history are fundamental to my definition and appreciation of the game. The navy blues are Park Lane and Mayfair, for them to be anything else is asinine blasphemy, yet the UK version was actually an adapted version of the original American one. The board is just a framework that can be applied to a number of locations, and it has been many, many times.

Playing Final Fantasy XIII, I feel like Square Enix has taken its own Final Fantasy framework board and applied to yet another world of its creation… except that it doesn’t quite work.

It’s not that it doesn’t fit. Individually, elements like the characters, the plot, the visual style, and the combat mechanics all stay true enough to the principles of the board. The paint job is great too; at times Final Fantasy XIII resembles an even more rarefied take on Avatar, and it’s stunning. 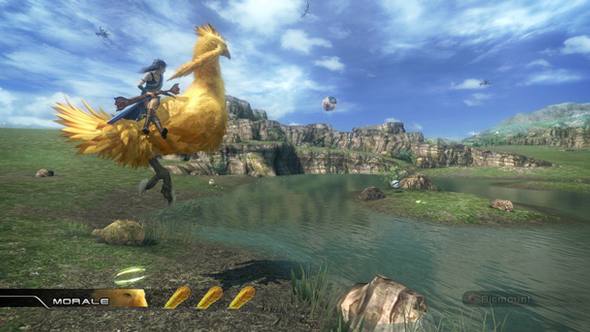 But the core of a Final Fantasy game is always the world, not just as cohesion of the plot, the scenery, and the characters, but as a fantasy that somehow feels grounded within reality. For all the dystopia, I can certainly relate with the values inherent to the people of Final Fantasy VII’s Gaia, and I can connect with the suffering of those caught by Sin in Final Fantasy X’s Spira. In both those games you can find spectacular, ostentatious tales alongside very real, individual stories, and the mix of the two gives their worlds that feeling of a fantasy that is not that unreal.

That feeling is not there in Final Fantasy XIII. It’s not as simple as the commonly cited criticism of there being no towns to really explore, although certainly that was the method of choice for adding depth to previous entries in the series. But Final Fantasy X also incorporates linear design that keeps you on a big long path in its first half, and it still finds ways to embellish Spira. In X, you bump into strangers along the way who are all too willing to regale you with anecdotes. You find things of interest through observation of your surroundings, this leading to elaboration on some facet of the world’s history mixed in with a dash of reflection by your party. Many of the most revealing moments in Final Fantasy X occur outside of towns.

I don’t think a world has to be vital to a story. Some of the best plays are just people talking to each other in a nondescript room. I do think, though, that worlds have been vital to previous Final Fantasy games. Moreover, the richness of those worlds has helped to set Final Fantasy above other RPGs.

Another recent Square Enix release, The World Ends with You, shows how a game’s world can be so vital, and not just to its story. Simply put, The World Ends with You would not be the same if it wasn’t set in the real-life Shibuya district of Tokyo. The story concerns how protagonist Neku struggles to really engage with the district’s loud and vibrant culture, but the values and customs of Shibuya pervade through every single facet of the game. People in the city are constantly talking about style and popular culture. You gain stats not from wearing sturdier armor but from fashionable clothing that wouldn’t go unseen amongst the district’s many garbs. Combat moves are tied to pin badges you collect along the way. Presentation, combat, stats, dialogue; these as well as story explicitly tie Shibuya to The World Ends with You.

Everything in the The World Ends with You is tied-in to its setting of Shibuya.

It’s not just about building up a game’s world, but about how you communicate it too. Kat Bailey recently wrote a 1UP blog post which extolled on how The World Ends with You does this:

“TWEWY also does a good job of establishing numerous background characters. There are the various shop owners of course, but there’s also the Tin Pin Slammer Kid, the nervous salaryman and the high school girls, all of whom serve the useful function of giving the setting a face. It makes it that much easier to roll with the characters when they start waxing poetic about the ‘pulse of Shibuya’, simply because you feel like you’ve gotten to know the city and its people so well yourself.”

Kat correctly points out the importance of background characters. On top of the personalities of the more prominent of these, Neku’s ability to read the minds of those wandering through Shibuya allows for unobtrusive insight into their lives. It’s arguable that this is just another way of presenting the same old press-X-to-talk shtick that has been Final Fantasy tradition. I’d argue that it’s more seamless than that, because it removes the oddity of wandering up to people and disturbing them, an odd concept for our increasingly reclusive Western society – and certainly a very reclusive Neku.
Final Fantasy XIII doesn’t feature many opportunities to engage with background characters, but it does offer some. It too offers another take like The World Ends with You did, but its take is not so hot. Rather than pressing a button to talk with strangers, you simply go up to them, and once you’re close enough they’ll automatically start speaking.

It’s amazing how much the removal of the button press, along with the high fidelity of the visuals, changes the landscape of these exchanges. They become nosey and intrusive, like you’re an invisible spirit barging in on someone’s private conversation. It does not help that the person often fails to make eye contact with you, nor does it help that the dialogue is often vague and banal. So not only does XIII barely present these opportunities, but when it does it doesn’t do it well. Dialogue is an important way of communicating the personality and values of a world to a player, and it’s unsettling that XIII fails to use it when it’s something that’s come naturally to the series before.

There are ways to communicate a world beyond dialogue, though. Adventure games typically offer up bits of peripheral information when you interact with non-important items, and this adds a layer of depth to a world. It often feels a bit forced to me, though, like my characters are thinking a bit too much about things that really aren’t that relevant. Often the information is superfluous anyway.

Maybe Assassin’s Creed II offers a strong example of how to make this work. Rather than presenting information on a multitude of unimportant items, Assassin’s Creed II offers optional text on all the important locations and people in its 15th century Italian cities. You can learn so much about that game’s world through the plethora of passages to be read, and I find real impetus to do that when I am staring up at all those beautiful structures. It’s like being on a guided tour, except one offered after just stepping out of the Doctor’s TARDIS.

And yet the game still works best when it integrates story with the world’s history, like when protagonist Enzi consults with the flock of courtesans in secret. That feels like peering into the history of 15th century Italy, and it’s exciting. I mean, how cool is it that you get to help Leonardo de Vinci make all of his crazy contraptions?

For all the obvious regression to be found in Final Fantasy XIII, the failure to really give its world personality and to truly integrate story with world is a failure that’s out of character for the series. After over 50 hours with the game, I’m not sure if there’s truly a society in Cocoon. All I know of the world is linked to the basic principles of a place controlled by a bunch of gods, but beyond that I barely know if the people in its world even like to eat food, or play sports, or spend time with each other. There’s so little depth and the characters are so self-involved that, for all the beauty and wildlife on show, and for all the emotion-filled, high-octane cut scenes, I feel nothing for anything in the game.

Square Enix can learn by looking at its previous games, as one of its peripheral games, at a certain Western game, or maybe just by reading a certain book, that neglecting the world around you can be a real bad move.