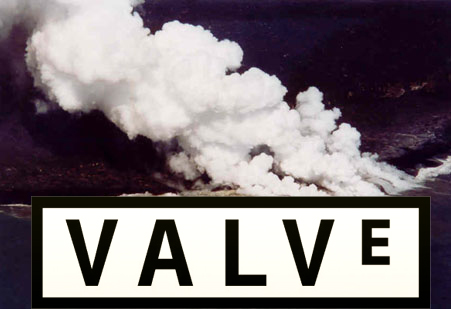 There were games like Resident Evil 4 for PC which needed a patch and updates just to come close to running, a gem of an example of what happens when the development team works hard for the first 6 months, and then, for the rest of their funds, orders pizza everyday for the rest of time until deadline. If a game needs a patch to run acceptably, or indeed, to run at all, then that game is more hassle than it is worth.

Disclaimer: despite the craters, volcanic landscape and steam in its logo, Valve has nothing to do with Iceland.

As strange as this might be to admit, I think the title of my own column isn’t necessarily all that clever. Of course I’m not buying – Steam is free. Not only that, Steam is charitable – the application is freely provided with every PC game I buy these days and kind enough to save me the bother of asking for it. The trouble is, if I had even a glimpse of choice, I’d probably say, “thanks, but not thanks”. Steamworks’ very structure and insistence to be generous – which, paired together, is not necessarily such a good thing anymore – reminds me of certain Christian activists whose life mission seemed reduced to handing me one of their presentational handbooks despite my efforts to ease them off such an idea: “Free Baptist Church will help you realise your relationship with Christ the saviour, his grace and spirit.” “Thank you, not today. I’m really busy.” “And may we know why you would not know your relationship with Christ realised?” “I’m not Christian, so please excuse me.” “…but you are aware that in that case, you are heading to hell?” “…”

Though there is a multitude of other, colourful comparisons building up in my head – and the perspective of sharing them is so tempting, I can feel my hands itching – they would sadly erase any meek chances I may have of being friends with any accidental Steam employee or a Baptist activist or Iraqi truck drivers, for that matter (just bear with me, please). Never to mention the fundamental right to choose is any client’s right, it is Steam’s dependence on other factors and how it affects the market that starts my stress hormones going. I remember the magical days – and having said that, I am not in my twenties yet – when to play a game, you’d place disc in the driver, install the contents and could cheerily play away. Then, by mu understanding, someone decided that such process is too simple for the 21st century and in order to successfully progress into technological development, we must make life even harder for ourselves.

Now, on the objective side, some people like Steam for what it is – a library to organise their (not necessarily so) little gaming Mecca, and some love the sustainability from the environmental perspective as our rooms are not invaded by CDs any longer. The problem with such solution is that they would be truly great, if they also happened to be as close to flawless as possible. Steam, like any DRM-driven device, will always have its problems – and that’s acceptable, by my understanding. What is not acceptable is that we are not allowed to choose whether we want the benefits, endlessly accompanied by the problems, of a DRM application, and with this deprivation, others follow: like the lack of access to the game we bought for at least £30 – and anticipated for months – because the servers are too clogged up (interestingly enough, in offline mode). Ultimately, the game you’d play whenever you wanted to 5 years ago is nowadays equivalent to a game you play whenever the servers clear up – which is further translatable into “whenever” and then, “whenever the first snow falls”. The real nuisance here is that the scenario predicted by the creators of Steam is too naive to work, as if all the programmers who gathered on the project paraded about wearing pink lenses in their glasses. The prognosis is that of a 100% disc-free, all-time-accessible, flawless device that stores our games anytime, anywhere, for us to play anytime, anywhere. And from my personal experience I can tell that more often than not, this is not the case. A Performance Laptop was my gaming gear of choice – the mobility was part of the appeal. Being a person who moves about and is on the other end of Europe a few times a year, I appreciated the perspective of playing my games wherever I please. Right?

As I discovered, not necessarily – gaming on a long flight is not going to be likely anytime soon with Steam. And no matter how many times its authors will reassure us about the offline mode, I am not fully convinced – probably because it unpredictably results in a dubious “please check your internet connection” message, causing me much confusion about how exactly the term “offline” is understood by Valve’s programmers. In any case, an application aspiring to the reputation of reliability while being dependent on something as unreliable as the internet, is a very strange affair altogether, bordering on the abstract. What if the zombies attack? Then what? Okay, let’s adopt a more likely scenario: a worldwide crisis in internet connection. Less dramatic and definitely more probable from a scientific point of view as everyone should still remember what happened to the internet when Michael Jackson died and hordes of fans invaded Google in search of reassurance. I’m going to try again: then what?

Well, in such a scenario, Steam would have you believe internet isn’t necessary to play your games – only to register (or, as the Steam site puts it, “just bring the computer to a possible location of internet connection”). The damned pink lenses spring to mind again – as if people without internet connection have the opportunity of moving their desktop to a friend’s house with broadband every time they buy a new game. The assumption Steam is making here is that in this time and day, everyone has good quality internet which has now become a necessity rather than a luxury; or that anyone who can afford a gaming platform can also afford broadband. Once more, Steam is wrong – on average, internet good enough for DRM managers costs at least £15 a month which translates into an additional expense of a minimum £180 a year, while a good gaming desktop is an expense of maybe three hundred something pounds with, usually, no further expenses. Am I a cheap-skate? Not necessarily. If I could be accused of anything, it’s the lack of ability to understand why I have to have something that puts me into further expenses and never before was essential to gaming.

There are two classifications of what the application itself is – the official one you will find on Wikipedia and the one I definitely prefer, my personal definition. From day one of release, Steam boasts a name “Game Updates Manager”, which to me means it will add a “be even more badass! Shoot with a tank three times as feckin’ massive!” feature to my game. Am I impressed? No, but at least I am amused. Then, there’s the matter of Steam adding updates that are not made to entertain but to actually make a game playable. I can understand updates downloaded to fix an annoying bug, the cause of which being a coding error no-one could predict at the time; what I do have a problem with is games that need an updates pack of its own which takes up as much memory as the game itself, to even run because if we go down that way, it’s a green light to make half-hearted games to then fill with half-hearted updates. This is a purely ideological matter of a raw perfectionist – there were games like Resident Evil 4 for PC which needed a patch and updates just to come close to running, a gem of an example of what happens when the development team works hard for the first 6 months, and then, for the rest of their funds, orders pizza everyday for the rest of time until deadline. If a game needs a patch to run acceptably, or indeed, to run at all, then that game is more hassle than it is worth.

However, what I see Steam to be is a still-in-development Facebook for gamers and when you put it that way, it reflects how unappealing Steam can be. The very simple point to be made here is that if you are the kind of person who couldn’t care less about updating your Facebook status after work then it is in addition unlikely you will be a person happy to be nagged by an annoying friend to play Call of Duty with him after work. Gaming is a typically introvert activity; after 8 hours of being herded into a tiny space with a lot of other people you most often pretend to like, what any person with a normal patience threshold really needs is a time made for themselves. So no, I do not want to play Call of Duty with you. Or with you. And no, I won’t reply to your chat during my game. Or access the Steam community. In fact, what even is a Steam community? A group of people who are usually clueless about how Steam ended up on their computer, because they are pretty confident they never ordered it? In all truth, games existed for long, happy decades and were played for the same period of time and not one tear was shed because Steam wasn’t there. We never had a problem with DVDs swarming our floors because we swapped with friends, traded them into shops or sold them on eBay. It required some creativity to manage our games for ourselves, but it was simple and accessible, and we weren’t dependant on any undependable factors. If something worked so well for years, why would we change it? You’ll hear me saying such a conservatist statement when it comes to Steam, and I’m not even a Tory.

Having said all that and written exactly 1, 765 words so far all for the sake of illuminating why I think Steam damages modern PC gaming, I will continue using Steam. Not because I particularly want to. Not because it was my decision to use it. And not because I was ever particularly impressed with what it can do. Quite frankly, I have been using Steam and I will continue to do so until PC gaming is alive, because there is no other choice to be made.

All I can say is that I’m a compulsive cynic, talker, reader, self-confessed writer and gamer. Until recently, one of the 1% of the Western population without a Facebook (now there’s 0.99% of them. Sorry, guys.) - follow me there shall you feel the urge. Because I always found it difficult to stay serious for a period longer than 10 minutes, my columns will concern games, but not only that, and there will be plenty of occasions to go offtopic – which is another thing I love to do. Join me in meowing about games.