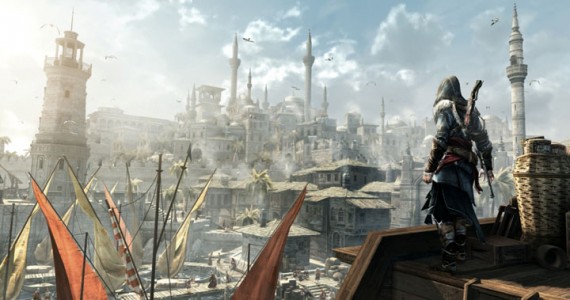 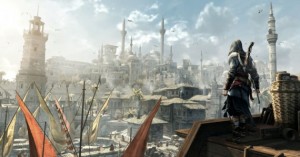 Let's get medieval once again, with the return of EZIO and ASSASSINS CREED REVELATIONS, the latest release from UBISOFT. In my opinion, the game should have been called ASSASSINS CREED REPETITION instead. OK, I hear you say it's a good game, and indeed it isn't half bad… there are a few new items thrown in to keep the interest up, but it just doesn't blow my skirt up I am afraid. Maybe EZIO and I have grown apart over the years. I don't know but I was really looking forward to this game and when it arrived I excitedly slipped it into the XBOX, and sat eagerly in my SKYLOUNGER awaiting the opening credits (which seemed to go on and on).

EZIO the main character has been in a bit of trouble since the last outing in BROTHERHOOD and he appears to have done a bit of porridge (jail time) in-between games. Fortunately for us, he escapes at the beginning and so our adventure can begin. The plot really revolves around the three main characters of ASSASSINS CREED; ALTAIR, EZIO and DESMOND. As fans of the game will be aware, these three are all connected. This is an ambitious undertaking by UBISOFT, which incorporated a number of different studios worldwide, and it has come together well. If you care about the story then there is plenty of interest, but there is the option to skip the cinematic parts if all you're into is the action.

Gameplay, well it's the same as usual. Apart from the addition of zip lines and the exclusion of horse riding for some reason, the controls have changed only slightly, which isn't hard to get used to. Some of the new additions though are just either a waste of time or downright annoying. For example, the option to make your own hand grenades… do you really need them? I know I didn't! It's all about getting up close and personal that makes ASSASSINS CREED enjoyable, not lobbing hand grenades at people like in CALL OF DUTY! I found when I did use them, by the time I had got round to throwing one, the targets had moved. So I ended up just diving in there with my axe and kicking butt the old fashioned way. 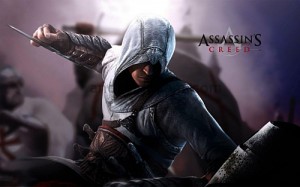 The most annoying element of this game is the Den Defence sections, where you stand on a roof top and direct your troops to try and stop your dens being taken over. The controls I found to be somewhat unresponsive at times and the whole point of it just a waste of time. ASSASSINS CREED is about kicking butt directly, not strategy, and this is way too much of a distraction from the game. WHAT were you thinking UBISOFT?!!

There is the appearance of ALTAIR (the very first assassin) in this game and you get to play him at different stages in his life (after you have collected the various discs). This again is a nice touch. I thought the part where you get to roam about in the Animus as Desmond interesting. It reminded me of the game PORTAL, a different off game experience; at least the developers have tried to create something interesting, even if it is a bit boring.

The multi-play is also a change from what we are normally used to, but not exactly ground breaking. There are numerous tasks and missions to complete and it is certainly worth a look though.

The game is set in CONSTANTINOPLE this time, and the usual amount of highly detailed streets and buildings abound, the likes that we have become accustomed to in ASSASSINS CREED. Atmosphere and sound within the game is excellent as usual, but the tasks are very similar to the last outing, and to be honest much easier. This is apparently EZIO'S last outing, which I agree it is probably time he went out and got a proper job and stopped all this killing shenanigans. 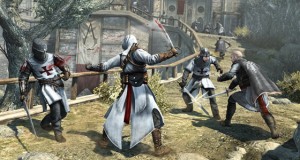 What more can be said, I am of course a big fan of the ASSASSINS CREED franchise, and have enjoyed every one of them. It is encouraging that UBISOFT took a chance on trying some new things in this game, most of which didn't work in my opinion, but that doesn't take it away from the fact that it is still fun to play. It's good but not great, I think probably the weakest out of the entire franchise. I think the time has come to move on, which is the right way for UBISOFT. It was great while it lasted and best to bow out now than drag it on I say. I will give it 8 out of 10 as some elements are annoying and it is similar to the last one.