I’ve played more than my fair share of MMOs since the genre began to gain popularity amongst the gaming community. World of Warcraft, Tabula Rasa, Everquest: I have run, walked, and fought my way through all of them. However, something new made its way to me from across the Internet, an invitation to a new and darker species of MMO, a passage to a realm that has made the very halls of the Forsaken’s realm seem like Central Park on New Year’s Eve. It is the realm of Requiem.

What most stands out about Requiem: Bloodymare is how violent it can be. Oh, certainly, there are other MMOs that are not known for their clean hands, but Requiem takes this much farther forward than any of the rest. Enemies don’t simply slump to the ground when defeated: limbs are removed, heads suddenly go missing without leaving a note, and in extreme cases, the bodies of your foes will end up not-so-neatly bifurcated. It is not surprising given the very dark theme of the game, which places you in a world where violence is a daily way of life and the world is a much darker place than it once was. If you’ve always thought that the current crop of MMOs always tended to be too tame, then Requiem: Bloodymare is the game for you.

What most separates one MMO from another is the story and when you have a boundary pushing MMO like Requiem: Bloodymare, the story should be particularly significant. It largely depends on what race you pick, as each have their own relations to the other two races, but in general, the story is that the world Requiem exists in is one that has been devastated by the continued application of mad science and even madder magic. That end result is a dark and twisted landscape that is populated by hideous creatures which are collectively known as Nightmare Monsters, which exist in two forms; stronger monsters come out at night and require proper planning and preparation to defeat lest the party, and a party you will need, be chopped into salami.

Getting chopped into neat julienne strips isn’t what this game is all about, though, as there a number of interesting features for players to explore. Apart from a broad sweeping PVP system, there is also the Weapon Enhancement System, the DNA System, and the Beast Possession System. The Weapon Enhancement System gives players the chance to structure their gear their own way by creating unique weapons of their own or simply altering the ones they have, while also having the option of making brand new gear in several different item creation programs.

A good weapon is always necessary, but as someone once said, it can cut both ways. When you’re in that kind of scenario and there’s nothing left to do, it’s time for the the Beast Possession System. This system is only available once the player reaches level 23 but, once that goal has been achieved, it can be a powerful equalizer on the battlefield. The primary ingredients for the Beast Possession System are called ’Pieces of Possession,’ collected from certain monsters, that can be used to select a certain monster to transform into at the end of a very long quest. Unfortunately, if you want more than one monster in your arsenal, or if the one you already have is killed off, you have to repeat the quest chain over again and collect more PoPs. 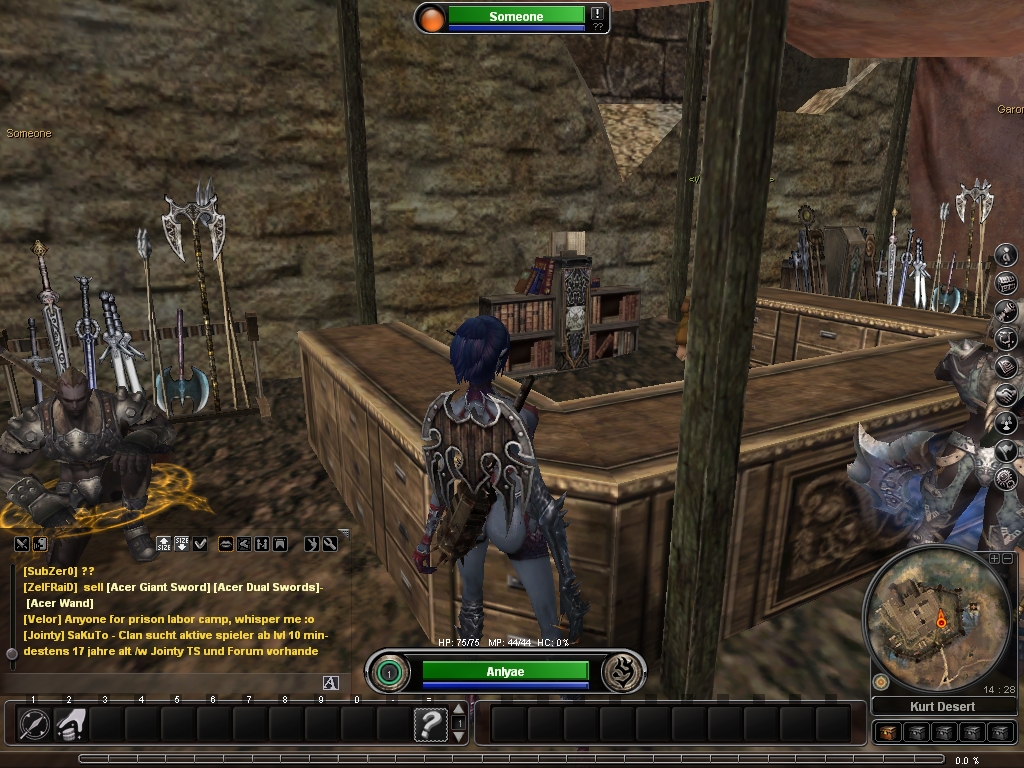 Finally, there is the DNA System, which acts as Requiem’s character upgrade system and is a colorful splash of science fiction in a game otherwise occupied by the fantasy horror genre. The basic function of this program is to increase character abilities, or to reduce the specific racial or class powers, by filling five DNA slots. This is done by approaching a specific NPC and utilizing certain objects that are specific to certain classes and types. If I have a magic user, for example, I can use the DNA System to lower the amount of MP needed for them to cast spells, increase the effectiveness of healing spells, or many other things dependent on their current level and job class. Also, when all five slots are filled a special Hidden DNA will be made available and will be different things depending on the character. If the player eventually becomes dissatisfied with the current DNA arrangement, it can always be altered but in that instance the player will have to fork over a fee for the privilege.

What is also surprising about the game is the number of races and classes available: specifically, how few of them there are. It is true that some games only feature one playable race (Tabula Rasa, for instance, only allows you to play as a human soldier) but this is usually compensated for by the presence of a wide variety of job types to undertake. Here in Requiem: Bloodymare, there are only three races to choose from and of these three, each has only a two-tiered job tree. If you pick the Kruxena, for instance, you have the option of starting out as a Rogue or Soul Hunter, but after you have made your selection, you only have one other final job you can select for your character: either a Shadow Runner or Assassin for the Rogue class or a Defiler or Domninator for the Soul Hunter class. Upward mobility comes to a halt pretty fast here.

The three races are an odd combination. While Gravity Interactive has stuck to the tried and true system of keeping the races balanced with each other, the presence of only three races leaves it feeling rather constricted. Each race is strong in some areas and weak in others and there are particular weaknesses that have been attributed to each race. The Turan, for instance, are the humans (or humes) of the game: they are the most balanced of the three as their stats have been spread evenly amongst strength, agility, and intelligence, making them good all-around characters but weak against magic. The Turans serve as a foil to the Kruxena who possess a greater talent in magic but are in their turn hampered by not giving a toss about the other races in the world. The final race, the Bartuk, are basically strong but stupid. It’s a well designed system but veteran MMO players may find it to be limited in scope. 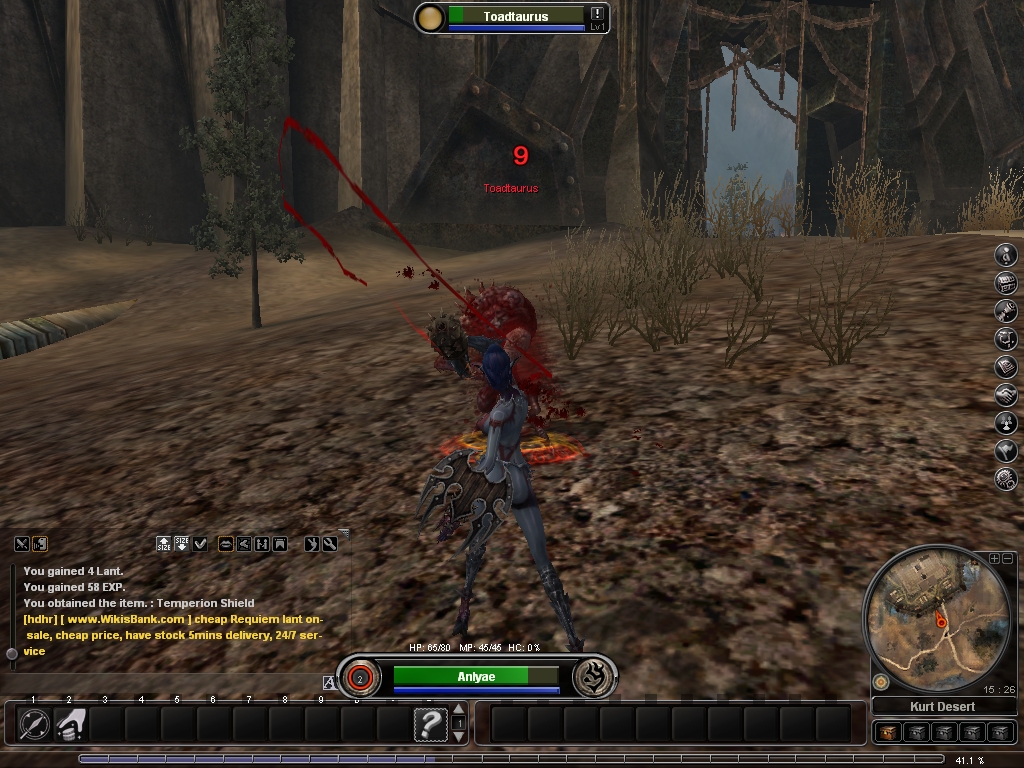 Both experienced and newbie MMO players will find the controls nothing to complain about as it the same system that have been seen in all other MMOs. WASD moves your characters to all points of the compass and Q and E strafe. When fighting, a HUD will appear around the creature telling you the creature’s name and level before you attack. Physical attacks are done via right click and, as your character becomes more injured, your character’s body will show more wounds.

To sum up, Requiem: Bloodymare is a good MMO, but the violent nature of the game, along with the darker, more horror-genre atmosphere, may not make it an ideal title for players new to the realm of MMOs. Basically, Requiem: Bloodymare is a great game for those who feel that the majority of MMOs pulled too many punches with their in game content or for people who like to have the latest thing.