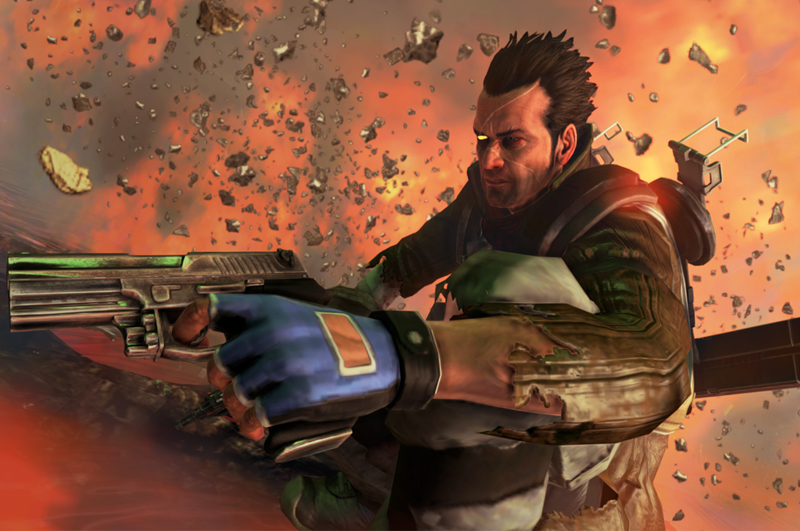 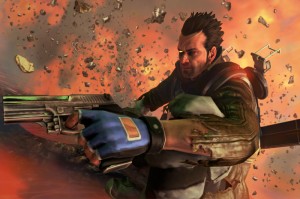 Imagine if you will that your character in a game could never die. "What would be the point?" you ask? Well, gaming developers REBELLION SOFTWARE and gaming innovator SHINTA NOJIRI, have come up with just that concept, the all-out kill fest which is NEVERDEAD, released by KONAMI.

The star of this third person shooter/RPG is BRYCE BOLTZMANN, a wise cracking (aren't they always) 500 year old demon hunter, cursed with immortality by the demon king ASTAROTH, who also thought it would be a good idea to murder BRYCES wife at the same time just to rub it in.
So as you can imagine he has become a bitter, alcoholic, tramp like demon hunter killing monsters and demons for money and revenge.

Leap forward to modern times and BRYCE is of course kicking bottoms once again, accompanied by a female private eye known as ARCADIA, whom BRYCE likes to tell his funny stories too, as they battle against an invasion of monsters and demons which have infected the Earth. That is basically it for the story, now what about the actual game play, well there is no time to wander about looking for things to do in this game, “no way José”, this is full on carnage at its best and its great! Literally every room or area you enter there is a what seems to be a never ending onslaught of mad looking demons, who have only one thing on their minds… to tear you limb from limb.

Fortunately for BRYCE losing a limb is nothing more than an inconvenience, and you are able to reattach your limbs or even remove them including your head. There is no place that is too small to explore, just rip your head off and throw it down the ventilator shaft etc, a great and original idea. The ability to regenerate is also very handy.

Now I know what you're thinking, if he can't die what's the point? Well BRYCE can die, sort of, when his head is detached and rolling around looking for his dismembered body these ball shaped demons known as GRANDBABY's suck you in. You can escape, but you have to be quick with the old A button or it's all over. Your partner ARCADIA, well she can die of course, and if she does then so do you.

With upgrades as you progress, including exploding arms, the possibilities are endless. The only problem is that you can buy upgrades, but you only have a limited amount of usable slots. So it's always best to check out each mission and upgrade yourself accordingly. I found the best all-around weapon to use was his sword, as the guns at the outset just take too long to kill anything. You do get some nice, tasty weapons as you progress, like the grenade launcher and assault rifle. Duel wielding is also part of it, and you can still fire your weapon, albeit without any control, even with a detached arm.

Talking of controls they can be a bit of a pain. There is no auto lock for shooting, there is for sword play, and combos seem to be quite thin on the ground. The action is pretty intense and it can run away with itself. Because of the destructive environment, the constant onslaught of demons tends to become just a mass of hacking and slashing (which isn't a bad thing) but without any finesse.  The wiggling around of the right stick to swing the sword is a bad idea, why not go for the old button combo's like in similar games? 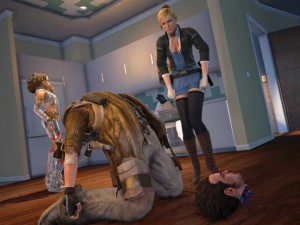 There are a number of interesting characters within this game apart from the two main ones. There's SULLIVAN, the head of NADA (National Anti Demon Agency), he provides info and support to BRYCE as the game progresses. Then there is ALEX, a demon hunter similar to BRYCE who likes knives and using them on demons. He pops up now and again. Another quite prominent character is NIKKI SUMMERFIELD, a teenage pop idol who somehow gets involved in all this, but seems to spend most of her time running away and screaming. Even BRYCE's wife CYPHER, who met a grisly end 500 years ago, makes an appearance!

Finally we have the two main bad guys in this game. SANGRIA, a strange looking almost comical self-appointed Duke of Demons. He makes regular appearances and loves to taunt BRYCE and ARCADIA. Then tehre is the main bad guy, ASTAROTH, the person responsible for BRYCE's predicament in the first place, and for giving him a nice glowing evil eye. Lets also not forget he killed BRYCE's wife as well, obviously he's not a very nice person. The Demons themselves are a crazy looking bunch they come in all shapes and sizes and varieties, so you won't get bored. The bosses (which appear on very regular intervals) are well thought out and can be difficult to dispatch.

There is a multiplayer on-line mode as well which opens up a whole new world of pain and destruction.

In many ways this game reminds me of DEVIL MAY CRY but is a bit rougher round the edges, making this more of a Steak pie rather than a steak. 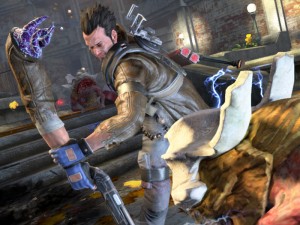 NEVERDEAD is indeed fun to play; there are many unique elements to this game, the dismemberment element for one. It's not trying to take itself seriously, and visually the game is well put together. With a banging soundtrack from MEGADEATH, loads of action and plenty of humour, NEVERDEAD has it all! Apart from some bad choices in the control elements of play, it has the makings of a good game. With more DLC planned for the future, things look good for BRYCE… maybe that will cheer him up! I give NEVERDEAD 8 out of 10 because the controls, plus some of the puzzles and some frustrating boss battles were a bit of a nuisance and could be improved on.