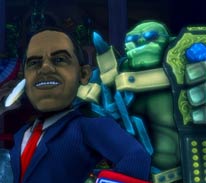 Suit up as Barack Obama, Mitt Romney and more to duke it out in Etheria’s Presidential Battle Arena, now available on Steam!

Twain Harte, California – February 20, 2012– Trendy Entertainment is raising a flag in salute to this election year and letting you fight to determine who’ll win this year’s elections. Make sure to keep your tabs open on Steam, because some awesome, free-for-a-limited-time DLC is coming later today. Put your hand on your heart and get ready to slay goblins with new character skins for Barack and Michelle Obama, Mitt Romney and George Washington. Fight in your very own Presidential Battle Arena to win unique weapons and pets including the Democrat Donkey, Republican Elephant, Boxing Gloves, and more!

Check out the trailer here: http://youtu.be/HgcMahEe490

Dungeon Defenders is one of the fastest selling downloadable games of all time, selling over 1,000,000 units across all three platforms since its launch in mid-October. Bringing together the best elements of tower defense and action-RPG progression, it allows players to team up and fight across 15 unique maps, 30 challenges and four difficulty settings in all of the game’s loot-raiding, spell-casting, level-up stacking glory. Players control one of four distinct heroes (five with PC DLC) in an epic bid to fight back an ancient evil. Each character comes with special functions, and players can create and customize/upgrade an armory of weapons and equipment.

Dungeon Defenders is rated E10+ by the Entertainment Software Review Board and is available for download now on Steam for $14.99. For more information on the game, visit www.dungeondefenders.com, like the game on Facebook http://facebook.com/dungeondefenders or follow the Trendy team

ABOUT REVERB PUBLISHING:
Founded in 2010, Reverb Publishing offers digital publishing to independent game developers on PlayStation Network, Xbox LIVE Arcade, Wiiware, Steam, iOS and Droid, by combining production and business development support paired with the proven public relations and marketing agency expertise from its parent company, Reverb Communications. Reverb Publishing’s unique business model is form fitted for studios, ensuring that they receive the majority of the game’s revenue and maintain ownership of their titles while Reverb handles all the non-developmental tasks including production support, navigating QA, and preparing for product submission.

ABOUT TRENDY ENTERTAINMENT:
Trendy Entertainment is an independent Florida studio focused on rapid, low-cost development of broad-demographic games for digital distribution. It is composed of the co-founders of Artificial Studios Inc. and former directors of Ignition Entertainment, who have together released numerous titles for PC, Xbox 360, and PlayStation 3 system, including Monster Madness and Cell Factor. For more information, please visit http://trendyent.com/