I’ll be very up front: I’ve never been a big Civilization player at any point in the franchise’s existence. It’s just not my thing. Does this make me grossly unqualified to review Revolution? You could argue that, but my arrogant nature towards the series also says something very positive about its latest incarnation in the fact that I loved it! Civilization: Revolution is a game that’s so well tailored to consoles that any non-strategy gamer should be able to garner some form enjoyment from it. Some PC stalwarts might blame my conversion to the series on the basis that some aspects of it have been toned down, but even though developer Firaxis has crafted Revolution as a more shallow game, it remains one that’s definitely worth diving into.

When starting up the classic single player mode, you’re presented with 16 different civilizations, each with their own figurehead (Abraham Lincoln for the Americans, Napoleon for the French), and special units (Panzer tanks for the Germans, Hoplites for the Greeks). You’ll be tasked with guiding your society from the Stone Age to the near future, attempting gain victory through one of the following winning conditions: Domination, Culture, Technology, and Economy. Culture is by far the easiest to achieve since cities will be continually handed significant historical scholars, like Gilgamesh and Aristotle, to aid their growth. Domination, which requires you to eliminate everyone else, is quite the chore and a huge drain on resources, so think carefully before you act.

Anyone slightly familiar with console strategy games would probably cringe at the thought of Civilization’s controls being applied to that of a game pad, but believe it or not, the transition is very smooth. The gameplay runs on a turn-based system, so a turn will consist of going through your current units, each of which can make so many moves per turn. Ordering a Soldier or Galley about can be done by first cycling to it with the D-Pad, moving the left stick across the terrain, and then pressing the command button to move to that location.

Hitting LB (or L1 on the PS3) will pull up a menu for any one city. On the left is a list of available actions ranging from creating units, buildings, and historically significant landmarks called Wonders. At the top of the screen lies the resource information, showing the population growth of your selected city, building progress, and gold harvesting. Resource management is one area of the Civilization series that has been simplified so players don’t have to get too technical. Workers can be told to to focus on scientific research or getting the next building project done, but other than that, the system is self-managing. Civilization fans might feel that things have been “dumbed down,” but I felt it allowed me to focus on more strategic matters like conflicts with other nations, rather than keeping track of minute details such as food production.

Another essential part of running your own nation is keeping everyone’s minds busy by choosing fields of research. This starts out with basic things like iron working, but will eventually move up to mass production, internet, and the power of the atom. But just like the smart kid in school that everyone wanted to cheat off of, you’ll eventually have other societies dropping by asking for some of your knowledge. Some will ask nicely, offering a fair trade for other forms of technology, but others will be a bit more aggressive. During combat a number will appear for each faction, the higher of which will usually win. Remember to upgrade to ranged military units, like archers, as soon as possible as they carry a distinct advantage, and any units that do survive a battle will receive upgrades.

Whatever the outcome of your actions, the great thing about Revolution is that you never have to be restricted to just one play style. It’s always possible to switch research paths or bring in a new form of government whenever a change in tactics is necessary. Once you’ve built a solid foundation for your society, managing cities gets to be a breeze, and developing them is so addictive that it can be easy to start mismanaging your own life. If players ever do have any questions concerning anything, the Civilopedia (a cornucopia of knowledge covering every concept and item of the game) can be accessed at anytime during gameplay.

The only real problem with the ease of Revolution is the speed of its progression. In past titles, it could take weeks to enter the modern era, but now the same feat can be achieved in a few hours’ worth of play time. That might be OK for people that don’t want to sink too much time into the game, and just want to reach the end, but the fun tends to be over a little too quickly. The one virtue within this vice is the fact that with so many variables, no session will ever turn out the same.

Luckily, the game does offer other modes to add to its overall lifespan. Ten special scenarios are available, such as Apocalypse, which drops the player right into modern times where everyone is out for blood and the only way to win is through domination, and Beta Centauri, which places players in the space shoes of the first interplanetary colonists, with advanced technological know-how from the start. A continually updated scenario of the week mode is also included. 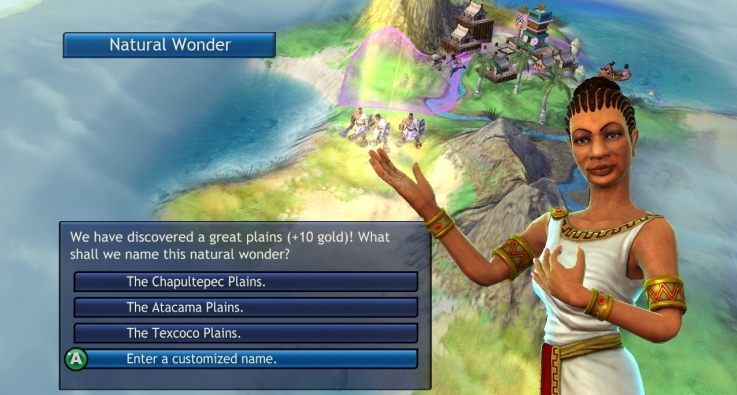 The multiplayer allows up to four players to partake in modes such as Head to Head, Teams, and Free for All. The game ran well online, but I did have some qualms with the slower pace (even with a time limit for each player’s move), and an earlier entrance into conflict before any real development of civilizations can occur.

Revolution sports a cartoonish look, but that’s hardly a bad thing when the results are so charming, giving what many would assume to be a stat-crunching affair a high degree of personality. Characters and units are given a very colorful animated appearance, and each unique city looks just as good up close as it does when viewed across the lush landscape of islands. When engaged in discussions with another civilization or an advisor, a quirky character will appear on screen that only speaks a Civilization dialect of Simlish (shall we call it Civlish?) making for an endearing, and funny interaction. I did encounter a few hiccups when shifting between cities and units, bringing about noticeable slow down, but for the most part Revolution is a good looking game.

Some sacrifices have been made in terms of complexity, but bringing a former PC-centric game to an entirely different beast like the consoles, some things just have to be changed in order to make it work. So while resource management and playing time might be a bit lighter, Revolution still succeeds in becoming an entertaining, engrossing, and intoxicatingly addictive strategy game. Even gamers not into the series, like I was, should give it a shot; you’ll understand when that first empire is up and running.