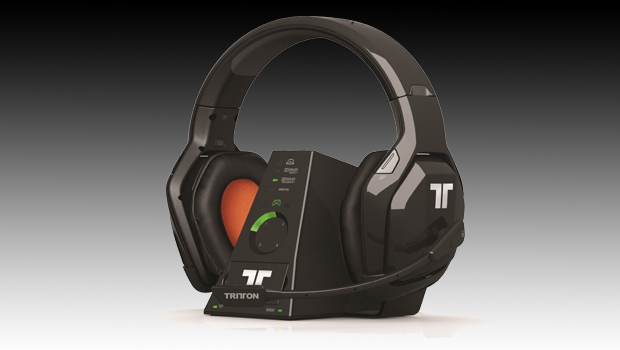 Is there no end to the amount of speakers we can fit in our living rooms? First came stereo, then 2.1, then 5.1 and now 7.1. Nearly every home has a home cinema system these days. After all, Coronation Street wouldn't be the same without it; with it HD soaps have never looked so good.

Of course in the gaming world sound is very important, yet not every gamer has his console rigged up to 7.1 surround sound system. So what is the alternative to this? Well MAD CATZ have come up with an idea that can change the way we play games or at least listen to them.

The TRITTON WARHEAD 7.1 headset is an incredible piece of technology and with all its amazing features promises to be the ultimate experience. I first tried these out at a preview some months back in London and was impressed by what I saw and heard. So when MAD CATZ sent me over a pair, I had to give them a thorough going over.

First obstacle was the box. Gaming peripherals these days come with so much packaging that some people actually post Youtube videos of the unpacking process. So ten minutes later I have the items out of the box and with manual in hand I set forth to connect it to my Xbox console. 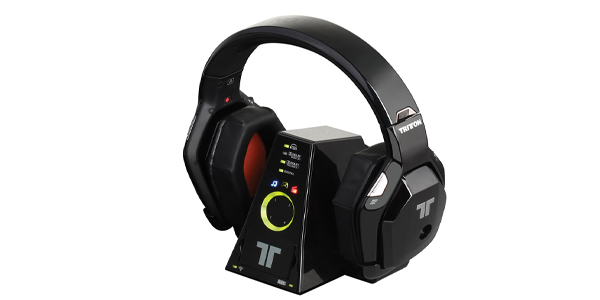 Actual set up is reasonably straight forward, all the cables and connectors are there. The optic cable fits directly to the Xbox allowing optimum use of the digital sound, however you can use the 3.5 jack if you don't have optic cable connection.

Next is to charge the battery. Being a wireless set up, MAD CATZ have come up with interchangeable rechargeable batteries, which is good idea and can extend your gaming experience by another 12 hours. The Lithium Ion batteries slot into the base unit so you can charge one whilst using the other. The actual battery slot is a tight fit and it is held in by a flimsy catch. The first thing I noticed was that the battery when charged doesn't pop out of its slot very far, and a certain degree of finger pinching has to be used to ease the battery out. Which is fine if you have average size hands or smaller, but all you people with stubby or fat fingers are going to have problems. Hopefully the action will become easier with use.

Right so fast forward a few hours as the batteries charge and we are ready to go. My first impression of these sleek shiny headphones was the weight, especially after a few hours when the top of your head begins to hurt. At a glance they look just like any other set of TRITTONS and they do look cool with its chrome buttons and black shiny finish. The large earpieces fit snuggly over my ears and the sound proofing is very good. Again after a while, being a wearer of glasses, I began to feel discomfort, because headset manufacturers don't make ear pieces to accommodate us glasses wearers.

Connection is easy just press the ON switch on the headset and the whole thing comes to life, with another click of the connect button on the base unit and the headset (you only have to do this once) you're ready for action. As this is a licensed Xbox product, the front of the base unit has a matching light up ring like the one on the console. Of course the down side of being licensed to Microsoft is that this head set will only work with an Xbox 360 and for this kind of money multi-platform gamers are not likely to be interested.

I tested the sound on the headset in a variety of ways, first obviously was through the Xbox 360. I happened to have a copy of TRANSFORMERS: FALL OF CYBERTRON sitting in my Xbox so what better game to test them out. It's hard to believe that you can achieve 7.1 surround sounds from a set of headphones… well you can and the TRITTON WARHEAD 7.1 proves it big time. The sound washes over you like warm treacle, cuddles you, and then takes you to a happy place. The 50mm precision tuned speakers takes over your senses and engages you with the game in a different way. Every gunshot, explosion and cheesy comment echoed around my head, and with the big musical soundtrack on this game, I quickly became immersed in it all.

The second sound test was music. With the added freedom of wireless technology, I was able to wander the house listening to music. I did have a number of connection issues with walking up stairs and standing next to my fridge for some reason, but the WARHEAD's re-connected quickly and effortlessly. It uses 5.8 GHz wireless technology, compared to the industry standard of 2.4 GHz, which means it doesn't interfere with any of your other wireless Xbox accessories.

Next came a movie which I watched via my Xbox console so I could make use of the headsets digital signal and the result was very good. I did find the humming of the headset became apparent during quieter moments, but the sound made up for it. 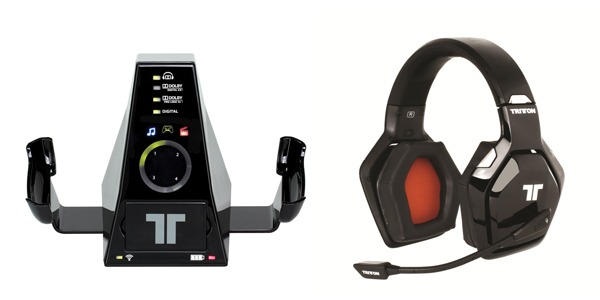 MAD CATZ have finally sorted a problem that has been the bane of gamers for years, and that is the link cable from your Xbox to your headset. How many times have I risen from my settee when the door bell has rung with my headphones on forgetting about the cable, hitting myself in the knee with a swinging controller. With the new wireless technology, this is the first totally cable free headset that connects via the Xbox's proprietary chat system, which sends your voice directly to the Xbox console. Plus the mic is detachable so it doesn't get in the way when you are using them as normal head phones.

Xbox Live is pretty straight forward, the warheads have a thing called SVM (selectable voice monitoring). This gives the user the option to hear your mic feedback through your headset so you can monitor the loudness of your voice live. Some of us like the sound of our own voices and some don't, this really sorts the problem out. The EQ is pretty simple, with a touch of a button you can have pre-set EQ for Gaming, music and Movies

While the TRITTON WARHEAD 7.1 headset is indeed a marvelous thing to behold, and it does do some incredible things, is it really worth the price tag? Can you really spot the difference between 5.1 and 7.1? There are plenty of unique features on this headset that does set it apart from the others, especially the total wireless connection. What lets it down is not build quality or technology, but the lack of cross platform use. Which is a price you pay if you want to be a licensed product I suppose, yet denying access to cross platform gamers who would have embraced this product could be a mistake on MADCATZ's part. Overall this is a great headset as you would expect from TRITTON, but your average gamer is not likely to be interested at this price. It does show how far headset technology has advanced over the years and these have some nice innovations. Unfortunately they are not the best out there. Yet they are the most advanced, and in my opinion, do set a new bench mark for things to come. So what's next… 10.1 ?