When the LEGO video games first came out it was hard to believe the kind of success they would find, but succeed they did, and with the recent of release of LEGO Batman, one has to wonder as to what franchise the series will tackle next. The world is wide and the available franchises are many, but a few jump to mind that may not be obvious, but would undoubtedly do the LEGO name proud. 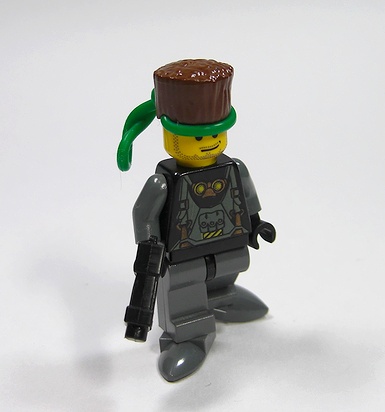 With Metal Gear Solid 4 out and the Solid Snake saga resolved to no uncertain degree, one can’t wonder if another remake of Metal Gear Solid isn’t something viable to consider. After all, any number of people will tell you that Twin Snakes was not an ideal revamping of the game, and there isn’t a single system out at the moment that hasn’t proven itself of capable of offering a worthwhile rendition of the original MGS. That being said, a LEGO version of the game could be a great way to go about it. The serious tone of the story could serve as a nice juxtaposition to the LEGO visuals, while some of the goofier moments in the plot could be given an added layer of more intentional humor via the obvious tongue in cheek nature of the graphics. With all of that said, I just think it would be great to play as a LEGO Snake. Imagine what the Ninja would look like….

With the fourth and final season coming to an end in the near future, it kind of sucks that to date there are no good tie in games to speak of. So why not a LEGO one? There has been more than enough action throughout the show to provide the basis for a game, and I would just find it endlessly amusing to see the drama of the series unfold via LEGO characters. Obviously the numerous sex scenes that permeate the show would have to be rethought -I don’t think a LEGO version of Six would be quite as attractive- but it would still be cool. And who wouldn’t want to pilot a Viper made out of LEGOs?

It annoys me to no end that there has yet to be a good Terminator game. The franchise is well past the two decades mark, and yet gaming fans of the franchise have been stuck with mediocre. Honestly, when the best one out there is that lousy arcade game, you know there’s a problem. Considering that the LEGO games made a name for themselves by tackling an entire series of films, there’s no reason they can’t do it again, right? Stranger things have happened! Remember that whole business of Arnie getting elected as governor of California? Once again, the mature content that permeates the Terminator films is a likely road block to such a game ever being made, but I’m sure there are more than a few Terminator fans who wouldn’t mind saving the future, one block at a time.

Why this hasn’t happened yet is something I literally fall asleep at night pondering. LEGOs are meant to build things; Sim City is a city building simulator. Am I the only who sees the potential overlap? While the changes made to the game would probably only be aesthetic, a LEGO rendition of Sim City would be undeniably cool. It would be a step away from the style of gameplay that the LEGO games tend to center around, but anyone who has been playing games for awhile can tell you that for the most part, change is a good thing. Besides, it’s been awhile since a proper Sim City game came out and honestly, it might be nice to play a version of the game that was more akin to the simplicity of the original. I don’t want anything fancy! I just want to build a city and then intentionally unleash natural disasters on it. Rubble only looks cooler when it’s comprised of little plastic blocks.

A remake of this is going to happen someday. Square Enix can deny it all they want, but honestly when it comes right down to it, a new version of this game would sell like dollar menu hotcakes, and there isn’t a developer in the world that can resist that kind of guaranteed fiscal success forever. That being said, the constant call for a new FFVII is still kind of annoying, especially considering the amount of time it takes for new Final Fantasy games to come out. As such, I think it would be fun to mess with all the fan boys out there and make a new version of FFVII in LEGO form. It would be an entirely unexpected way to go with it, likely to displease a lot of people hoping for a more Advent Children approach to the graphics, while still remaining very cool. You wouldn’t even have to change all that much, really. Even at their best, the character models in FFVII were pretty blocky any ways.