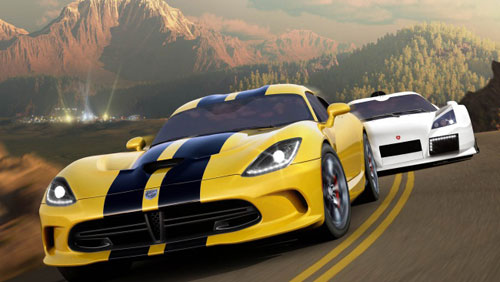 Microsoft Studios has given us some legendary gaming titles. We initially learned to drive virtual cars with Microsoft’s Midtown Madness, we crushed several dynasties and emperors in the Age of Empires, flew a Boeing, drove the world’s fastest train and what not! And, now it’s time to set the streets of Colorado on fire, as the festivities begin with Microsoft’s Forza Horizon game for Xbox.

Developed by Playground Games and Turn 10 Studios, the game rolls out as a spin-off version of the super hit franchise – Forza Motorsport. So let’s check out if the game really has the elements to create an impact!

The Game Play:
This installment of the game revolves around a fictional festival known as the Horizon. Set against the backdrop of Colorado, USA, the game’s primary objective is to become the racing-super-star of the festival after successfully completing a series of racing challenges. The game retains several features of its previous titles such as the real-time racing mechanisms, stunning visual graphics and some slick array of cars.

The gamers progress to further levels after completing three things – races, races and more races. They have to undergo every class of racing such as the drift, the rally mode and the point to point races that takes place across various terrains such as dirt, asphalt and gravels. Outside the Horizon festival, the game even offers several street races, in which the players can participate and prove their driving skills. Though a victory in this doesn’t add to the Horizon’s progress, it sure rewards the players with some cash.

Some of the other in-game modes include the Speed trap in which the players can compete with fellow racers with speed as the crucial factor. Several cameras placed in the track record the speed of each driver and reveal the result. A photography mode, where players can drive their cars to a picturesque location and take a snap along with their cars! Also present is the stunt mode, where players have to perform some deadly stunts such as lethal drifts, near-misses and other daredevilry. But, what’s best in the game is the showcase mode, where players have to select a car and compete with not another car, but a World War 2 flown fighter plane! The race takes place on a freeway and the players have to focus on nothing but the roads and the curves to drive past the aircraft.

The game has an impressive multiplayer mode as well, which involves racing against friends, a projection of friends and eight player online racing mode. Furthermore, the game also retains some multiplayer modes from its previous titles such as the cat and mouse mode and the virus mode.

The Representation:
The game, powered by an enhanced Forza Motorsport 4 Engine truly brings the racing modules to life. The handling mechanisms and driving experiences are just top-notch. On the graphics front, the game does an impressive job (as usual) by recreating some beautiful landscapes of a countryside freeway. The illumination of the setting sun on the car, the hustling of leaves when a car moves past, the displacement of the mud by the wheels on a dirt terrain and the road-side shops and festivities are some of the commendable visuals developed by the team! Play it and you will realize the amount of detailing given to even the smallest of things in the game.

Inclining away from the races, the game allows you to do some alterations and modifications to your car such as the custom paint job, vinyl, suspension and the like. Apart from this, the game even has a feature where players can search for classic cars preserved in special places over a period of time. Once they uncover the spot, they can restore them and add those cars to their collection. And here, we must say that the inclusion of such a feature indeed helps to keep redundancy of the game afar!

The Bottom Line:
Forza Horizon is a game that offers a unique-feel-good experience that is hard to find, specifically in a racing title. The heaps of interesting gaming modes throw us like a boomerang and make sure we come back to it for more. Also, by not just relying on the concept and the game play, the team has impressively come up with some vivid visuals, which plays a major role in the success of the game. When all such elements are in place, a game can never go wrong. Go for it, as it is highly recommended.