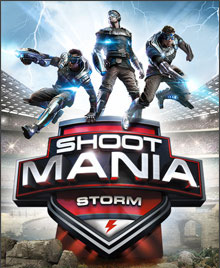 Any ShootMania Storm review you might read suggests a longing for a little bit of nostalgia when it comes to first-person shooters. Nadeo’s ShootMania Storm is the sort of title that can slip right past you. That’s not to say that it looks terrible or unappealing, but there’s a certain air of simplicity about the game. It certainly doesn’t initially suggest the cinematic flash of something like Call of Duty or Battlefield. It’s not until you play the game for yourself that you see why just about any ShootMania Storm review you might read is pretty high on this title. You really need to see for yourself why ShootMania Storm is slowly but surely building a following amongst first-person shooter games.

Is this a remarkable title? That might be pushing it, but a lot of people are going to find a lot of fun to be had with ShootMania Storm.

The people who are truly going to appreciate a game like ShootMania Storm are those who remember the glory days of such releases as Quake and Unreal Tournament. There is a definite old-school vibe to ShootMania Storm that’s going to grab you the moment the game begins. The maps might be different, but the basic gist of ShootMania Storm is this: Click left to shoot, and hit the spacebar when you want to jump. It really doesn’t deviate too much from that formula. Players who have been looking for a return to the twitch shooters of their youth are in for a treat. ShootMania Storm delivers strong, engaging, old-school gameplay from start to finish.

ShootMania Storm is different from virtually all first-person shooters currently on the market. One reason for this is the impressive level of care and attention that went into crafting one of the most original deathmatch modes in recent memory. Surviving the mad dash to the beacon in Storm mode is only half the battle. The true blood and guts free-for-all begins when a tornado forces the surviving players into an increasingly claustrophobic space. Luck has very little to do with victory or defeat in ShootMania Storm. What it truly comes down to in the end is your ability to quickly break down your opponents into a series of possible moves they’re going to make, and then anticipating their exact next move before they do. Battle Mode is another mode that’s going to make this obvious to you.

Another way in which ShootMania Storm differs from other first-person shooters is the map creation tools. This is another area in which the developers at Nadeo are keenly looking towards the past, while ensuring the game isn’t so immersed in the old days that younger players can’t enjoy it. The pre-made maps are only fine up to a point, so it’s great the map creation tool gives you some additional depth.

ShootMania Storm isn’t for every player, and the weapons choices aren’t spectacular, but there is still a ton of enjoyment to be had with this game.

Andrew is a contributing editor to Wealth Daily and Energy and Capital. His hobby is collecting geeky stuff and playing guitar.