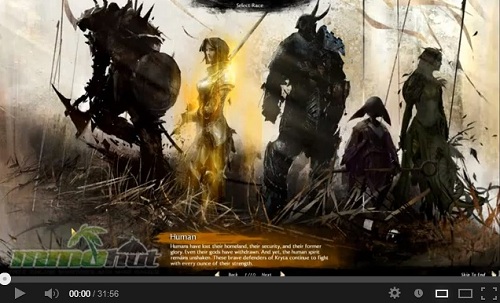 Regret not Playing it Sooner

Guild Wars 2 was released last Aug 2012, and since then it has joined an exclusive club of MMORPGS. It is one of the few online role-playing games out there that have seen an increase in their subscriber base since their release. It is especially impressive today, when highly anticipated MMO's are struggling. For example STWOR (Star Wars: The Old Republic) and Tera have switched to free to play, only months after their debut.

But what's different about GW2? As I continue to play, I continue to discover differences big and small each day. It's important to note that, I haven't had the game long. I'm not one of the players who instantly bought the game when it was released; in fact I had no intention of buying another MMORPG – but fate had other plans. Someone gave me a copy a few months ago, for a while I was content letting it sit on my table collecting dust. That is, until I finally had some time on my hands. I can honestly admit that I regret not playing it sooner.

The game is set in the fantasy world of Tyria. It's filled with environments that are as beautiful as they are diverse. The scenery ranges from a barren desert to snow covered mountains, each with their own unique brand of creatures to fight. At first, I was dumbfounded by the visuals; they were highly detailed and gorgeous. It just seemed so different when compared with my previous online game experiences. That feeling didn't last long though.

Before I knew it, the visuals became an afterthought as I found myself immersed in the game. Time sped by as I jumped from map to map, brawling against the meanest, worst monsters out there. It was as if I was a man on a mission, rushing through areas like an Olympic sprinter, just to get to the next story point. I was driven by the tale that was being told. There's a rich storytelling element to the game, not quite on the scale of SWTOR but significant enough to capture my imagination and keep me going. My heroic journey is far from complete but my common-born human has gone far in such a short amount of time.

Everything You Do There Comes with Some Experiences

Unlike some MMORPGS, the leveling system does not rely on a quest-based system. In fact, exp is quite easy to come by in Guild Wars 2. Almost everything you do there always comes with some experiences, from the tried and tested monster slaying to simply reviving a downed comrade (npc or human). If the developers had left it there, that would have been enough but they decided to innovate.

The game encourages exploring, whether by collecting skill points via challenges, or unlocking quick travel way-points, the player gets experience but wait there's more. Every time a player completely explores a map, they get an extraordinary bonus: 10% experience (at any level) and level equivalent items.

Intriguing Real Time Events Link up Like a Chain

There are real time events that take place as you explore as well. Say, I'm traveling in a heavily wooded area but suddenly a cry goes out and poor innocent villagers are being kidnapped; do I continue on or save them? The choice is up to the player, but even more intriguing is sometimes these events link up one after another like a chain. It's a situation, where finishing one event quickly leads to another.

The Game Remains Challenging at Every Turn

Lastly, all maps remain a challenge. It's a big selling point that you won't crush puny worms with an over leveled character. In fact, all maps have a level cap and my character always scales down to the map I'm currently in. It's a novel experience, but it ensures the game remains challenging at every turn. Oh and the experience scales up, another cool thing when leveling.

Each Character has Own Unique Play Style

There are 5 playable races and 8 playable classes, each with their own unique play style, I mean it. Some games advertise this, but they’re still the same fire x, slash y etc. This game isn't like that at all. The f1-f4 buttons showcase the classes leading abilities. The Mesmer for instance concentrates on being able to make clones, while the engineer can switch out specialized combat kits on the fly.

The skill system is different. It's based on the character's equipped weapon instead of carefully chosen skills. There are still skills to choose, which are called utility skills but they aren't the primary damage-dealing component.

Progression is a Breath of Fresh Air

There is no new tiered armor being released every couple of months (At least that's what the developers claim); the lack of a gear ladder may have some crying foul but it symbolizes hours of saved time. There’s no more rushing to get the next great thing; seeing as the end game gear is hard enough to acquire. If that wasn't enough the legendary weapons can take months to acquire.

There are two types of pvp in this game, Team and World. The differences are huge, but they're both satisfying and I've spent hours of fun on each of them.

Team based play is exactly what gamers think about, instanced maps where people battle for control of strategic points. It's all about skill as the game automatically grants you the best equipment possible and automatically caps your level. It's the players' abilities that define whether they lose or win and competition is stiff.

Next up is Wpvp and I personally think it's the greatest feature of this game. It alone, makes buying the game worth it. However, mileage may vary depending on the server. It isn't like wow, where there are timed and instanced battlegrounds, which mimic a round from a first person shooter. The scenario is a 3-way 24/7 strategic battleground fought over 4 maps. The objective is for people to capture forts, castles and supply points through siege warfare while denying them to the enemy. All this is done in the hope of getting server bonuses.

A Hard but Satisfying Road

Massive groups (I've seen 50+) of players roll out and clash with each other attempting to stabilize their gains or offset their opponent. Setting up catapults, manning the walls and skirmishing all over the maps can be expected. It is a hard road; any battle is but it is also a satisfying road. The massive thrill I get as I watch my servers enemy's fall against our onslaught can only match my dismay as I see my group wither and die against our adversaries. It's an exciting ever-changing landscape but it still feels like there is a new challenge around every bend. In short, it’s the finest PVP I've ever had the pleasure of experiencing.

So Casual yet So Fun

Guild Wars 2 is a deeply immersive online game. It’s easy to pick up and easy to let go. The great thing about guild wars 2 is that it's free to play. Purchase it once and it's available when you want it. Unlike other online games, it won't make me worry that I'll be left at the curb, where my hard fought items have been outdated by a recent patch. It's liberating, that an MMORPG can be so casual yet so fun at the same time. I know that I may be leaving it for a while, but I'll come back to it eventually. It's not as if I could resist the allure of high-paced player vs player combat, where a single button press could mean the difference between victory and defeat.

Sidney is a self-proclaimed nerd. Superhero and Fantasy are his realms of expertise and he delights himself in their pursuit.