Planetside 2 is a massive multiplayer online shooter game. I know what some of you are thinking. People can be wary of playing something that's always online, but unlike other games, shooter games truly excel when gamers play them with other people. This has been true as far back as I can remember, and that's the original Counter-Strike / Half-Llife. 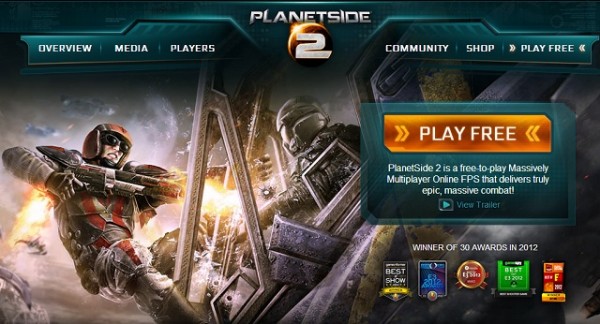 At first glance the game doesn't seem to be all that different from others – a futuristic war on some made up planet, advanced looking firearms that bring out a sense of déjà vu, and graphics and art styles that don't particularly stand out. All of the usual staples of games have been done to death, but upon closer inspection, I discovered that it was anything but the same old show.

The differences start at the beginning. We get three factions instead of two teams to choose from. Each of factions has their own little bag of tricks, but regardless of the pros and cons, when the three sides meet, it's almost certainly a free for all. This feature alone makes for interesting dynamics as attacking one faction could leave a faction vulnerable to another.

No Man is an Island

Teamwork plays heavily in this game. They say that no man is an island and that is particularly true for Planetside. As the lone ranger, I cannot hope to go storm a base single handedly and capture it; the game is not designed to work in that way. Sometimes as many as 5 people are required to cap a small zone of any specific building (some are huge), and there will be multiple points to seize before the building's holders change. This game has its own squad and guild system that has been given an easier UI since release.

A Whole Host of Possible Situations

Fighting is usually concentrated on buildings and other capturable locations. That's because capping them will give the holding factions a set of bonuses, from advance spawning positions to an increased tick in consumable resources (used for buying grenades and vehicles). The location of these structures is wide and varied, resulting in a whole host of possible situations. Does my group attack from the air? The flank? Or maybe just rush in and hope for the best.

Faster than Anyone Could Blink

Adapting to the task at hand is a lot easier as well. There is no need to wait until you 'die' to change to the class or weapon loadout. That's because there are a number of locations where a player can switch out on the fly, and there's also a mobile support unit that could do the same thing. Being able to change equipment from an underslung grenade launcher to a sniper rifle faster than anyone could blink brings a certain depth to the gameplay, which I like to call "adapt or die". A medic faced with a heavily armored tank stands no chance, but with a little skill and a lot of running, the outcome might just be different.

The flexibility aside, the one thing that really makes it stand out is the sheer scale of it all. For example, it's not unusual to see battles between groups of 60 plus. Then there's the environment, when all other shooters before it were set in these tiny little maps, Planetside is set in giant free roaming continents. It allows all its players to move around where they please, assuming they don't die before reaching their destination.

I'd imagine that it would take far more than just an hour of walking and sprinting; that's under the assumption that the player is moving through flat ground all the way. Valleys, mountains and hills litter the maps and can make for tricky navigation. In a way it's just like the real world where natural features play a big role in maneuver and combat. If anyone reading this is thinking height advantage, they'd be spot on. I once faced a situation where we had to climb up a hill; there were at least a few dozen of us, but it didn't make any difference. We all died quickly from an unrelenting rain of bullets and explosives.

The "A" Game was Planned Ahead

One would think that the large area would make spotting the opposing factions difficult. Luckily it isn't; the developers (Sony Online Entertainment) brought their 'A' game and planned ahead. In that default option, most people would think about moving from one location to another is by use of transports. While driving a tank or piloting an aero fighter does get the player where they want to be, it is hardly the only option. The game is set in some technologically advanced society and thus it naturally has drop pods. It allows players to go to any hotspot or spawn beacon quickly and efficiently. It's easy to use; merely pull out your maps, look for and click deploy, though it does have a cool down.

Deep Down, It Remains True to its Roots

The combination of all these features turns the genre into a whole new ball game. The differences are vast, but it still has the old tried and true concepts on any shooter. It brings tactical and strategic depth comparable to any hardcore simulation game, but deep down, it remains true to its roots – fun and easy to play.

Over the years, Sidney Raflores has played a wide variety of games across multiple platforms, but his love will always be the computer.