I had a lot of expectations for Watch Dogs as I viewed in my head as my first serious Xbox One game. Oh, sure, I'd gone around with Titanfall for a while, but that was more something along the lines of a summer romance which I traded back in the moment that the time I would have to spend learning the game well enough to not get killed every five seconds diluted any pleasure I had at steering a giant mech around. With Watch Dogs, on the other hand, I was looking for more of a long term commitment, especially after the heartbreak I experienced playing Assassin's Creed 3. AC3 was shiny, visually stunning, and proved too be too all around bossy to be fun. I was hoping Watch Dogs would be different, that it would help take the sting out of my previous disappointing Ubisoft experience.

Happily for me, it did, for the most part. All in all I found Watch Dogs to be a strange beast to learn how to tame; firstly is the matter of the story which concerns one Aiden Pierce, a thief/hacker/gravelly voice mystery man who participates in an electronic heist at the start of the game which catches the attention of the wrong sort of person who then puts a hit on Aiden. Unfortunately Aiden's niece-Lena Pierce- perishes instead and it is this tragedy-and finding out who put it into motion and why- that serves as Aiden's primary motivation throughout the game. However, apart from that, much of Aiden's background outside the immediate events of the game is as just as mysterious to us as is the other characters in the game; this is something of a personal beef, but it's a little annoying to play a character I know almost nothing about of any value. He has a sister, he has a nephew, and I can safely assume he had parents but apart from that…de nada and I am not sure why.

Despite this somewhat frustrating annoymity that the protagonist constantly wears I found there was more to like about Watch Dogs than to dislike. Firstly, the game is beautiful, and not just in the ways that you see right away, things like the sun glittering on the water, or rain sloshing down on the sidewalks. I remember walking down an alley when I saw a little cyclone of dirt spring up and swirl around for a few seconds before disappointing. It was unexpected and, admittedly, all the more impressive for how relatively minute an effect it was. Basically all there is to say about this version of the game is that, from high to low, an impressive graphical achievement when you are playing something that has the muscle to handle it.

So that's how the game appears to the eyes, but what about the ears? Well, it depends on which part of the game you're talking about. If you mean voice acting then you shan't be disappointed, particularly in the character of Jordi Chen, who often easily snatches the limelight away from the gruff Aiden. That's not to say that Aiden's character is poorly thought out or badly acted, but it terms of personality he doesn't seem to bring much to the table and as a result can often be left out in the cold when he interacts with other characters. I myself found myself wishing that all the characters got more in the way of screen time as they spend most of their time speaking through Aiden through phone calls. Despite that additional personal issue the only thing that is liable to annoy you about Watch Dogs's audio setup is finding a tune on the radio you don't like…of which, for me, there were many. 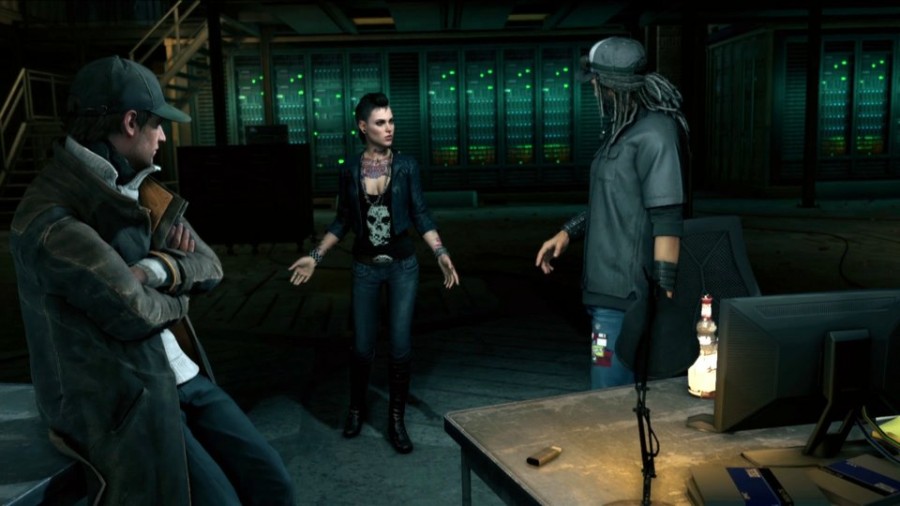 "What do you mean I can't join you without a baseball cap?"

The gameplay is the part of the game where Ubisoft seems to have put most of their effort into creating and, thankfully, their work has paid off. This being an open world type game there is, by default, a great number of things to see and do, but Ubisoft has factored in a separate party piece that is pretty unique: Aiden's smartphone. In Watch Dogs's Chicago, connected as it is by the CtOS, Aiden's phone is the most potent weapon in his arsenal. You can call it up to track your progress through the game, order vehicles, access your skill tree, and even play a variety of AR games installed on the phone. 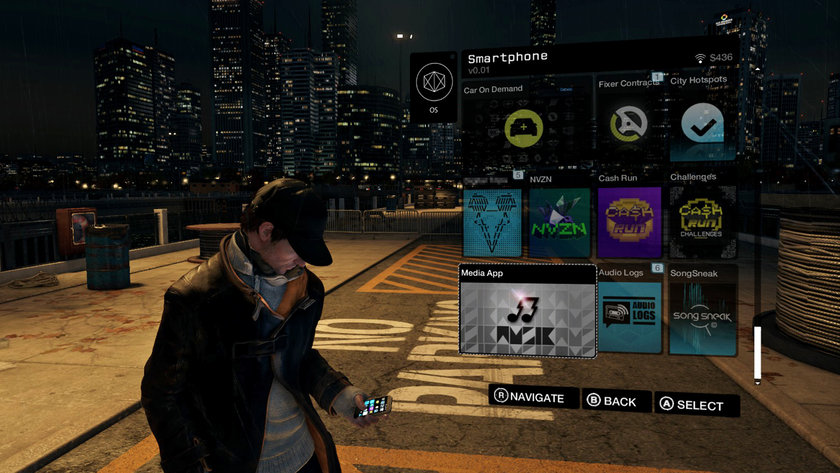 "I'm done with my illegal things quota…time to game."

In addition, by accessing certain CtOS signal towers scattered around the map, Aiden can gain access to the CtOS profiler which allows him to access banking information, see text messages, and even hear phone calls of passerby as he walks along the streets. You still have access to the ordinary sorts of firepower-machine pistols, shotguns, and the like- but when danger threatens Aiden's phone can still be a potent weapon of offense and defense. Trying to escape from a police cordon? Use your phone to cause a city-wide blackout and escape under the cover of the sudden darkness. Anxious to stop a fleeing perpetrator? Wait until he is level with a nearby exhaust vent and hack into it, increasing the pressure within and sending a jet of steam into his face. In more dramatic circumstances, when you absolutely, positively need to get away in a hurry, you can even run up to a just departing train, hack it to make it come to a stop, then leap aboard and send it on its' way again. There's a lot that can happen in Watch Dogs and more often than not your phone is all that you need to make full use of these encounters…but you might want to keep a pistol handy too. 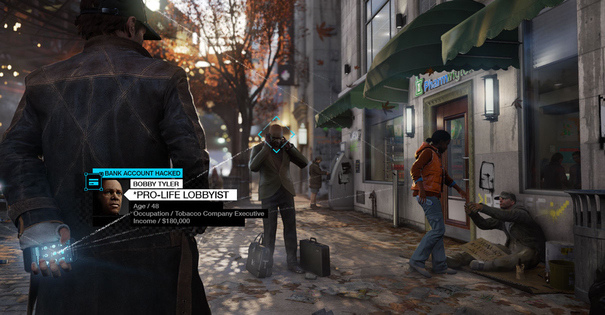 How Aiden protests the tobacco industry.

So, there's a lot about Watch Dogs that impresses and amuses but, yes, it does come with some flaws too, most of these having to do with the nature of open world games in that the immersion factor tend to break down after a while, especially after you see the same lines of dialogue coming out word for word from different people all over the city. It does take longer with Watch Dogs then it does with other games of this type, but it is still there. I'm not saying it's the fault of Ubsioft that this happens; on the contrary I think they've done a great job making the city feel as real as it does. There are things that do aggravate me about the game, though; there is the fact that game suffers from a bad case of trying to please too many. You have a hacking game where you are given many opportunities to exploit a nonviolent option and then there are moments when the game basically pushes you into situation where violence is your best solution because Ubisoft wanted the story to go that way. So…suddenly, in this world of choice, my choice is suddenly taken away?

Then there are also the technical glitches..inevitable in any game of this complexity, but still there. I actually had to return my first copy of the game because it would not load. The next copy I got worked just fine once I installed it, but I still ran into slow load times, buggy side quests, and such like minor technical issues. There's nothing here that will break your game, but it may prove an annoyance to your progress in collecting items and achievements.

So, in the final reckoning, Watch Dogs is am impressive example of what an open world game can be when new design methods and new technology is put behind it. The level of detail, the attempt to create the feeling of being in a living, breathing city, all of these things are to Ubisoft's credit. However, this achievement is diluted sadly by some frustrating missions, technical glitches, and a “use when necessary” attitude to the characters in the game who it would have been fun to see more of. If you're a fan of open world games in general or just Ubisoft games in particular, then you'll be right at home. Anyone else will probably be satisfied with a rental.