Playing Ionstorm was a bittersweet experience for me; it felt like meeting a long lost childhood friend and being dazzled at how much they'd grown. When I read about the game's description it seemed to be a spiritual to those old 8-bit classics I played so much when I was growing up: Missile Command, Space Invaders, and the like, and indeed it is much like them. However, this genre of game has been out of my life for a long time, and I see that it has made use of the time it was away to learn a lot of new skills.

Ionstorm isn't like the shy, reserved titles of yesteryear; it's not going to give you neat rows of gradually encroaching aliens or missiles that come down from the sky at regular intervals. Playing this game is like trying to play a brick breaking game at the same time you are playing a game of Space Invaders all the while dancing in the middle of a techno rave. The game starts you out at the bottom of a tower(again with the tower climbing) which you scale by clearing several independent stages, each of which have their own theme, and titles like “Pyramid of Pain” and “Tic Tac Boom”. It's clear from this that the makers of Ionstorm are trying to present this initially retro style of gaming in a grittier, edgier light, a phenomenon I have decided to call the Zelda-Diablo Progression. Anyone who thinks they can top that term are welcome to try. 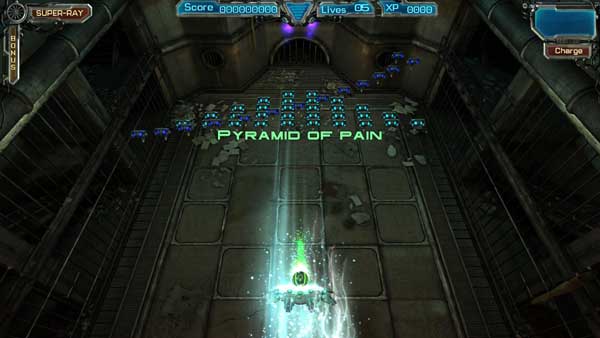 The question is, however, does the game succeed in what it's trying to do? The answer is, broadly speaking, yes. The positive things about the game are that it is fast paced, extremely stimulating to the visual and auditory senses, and addicting. You move the paddle around using the mouse as the techno music blasts in the background and ricochet the ball hither and thither about the stage, trying to explode as many of the bizarre entities on the other end of the screen as you can. You may think, like I did, that this sounds simple but oh no; this game has a few tricks up its' sleeve. It's akin to playing in a Las Vegas casino, where the sights and sounds are all set up to distract you from the game you are playing. I found quite often when playing Ionstorm that I was so caught up in the pretty lights and back beat that I would lose focus and miss the return volley, which had, ah, explosive results. The challenge of the game lies in pushing past all that and learning to focus on the mechanics, which I found rather invigorating. 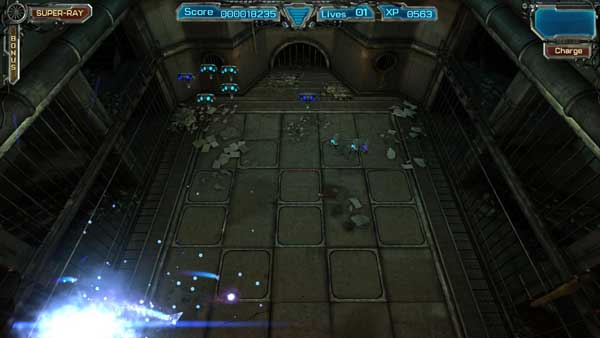 This ties in with the other aspect of the game that, sadly, I found to be somewhat annoying, and it is that the game is unforgiving. You know how people, like say that hypothetical childhood pal I mentioned before, often have trouble kicking a bad habit? Ionstorm has the same problem, and it seems even more of an aggravation than it was when I first started playing this type of game. You are only allowed three lives per stage, no extra lives allowed, and if you miss a return pass even by an inch your paddle will blow up and cost you a life. Loose all your lives and you'll be served two words that are rarely seen nowadays flash on your screen. 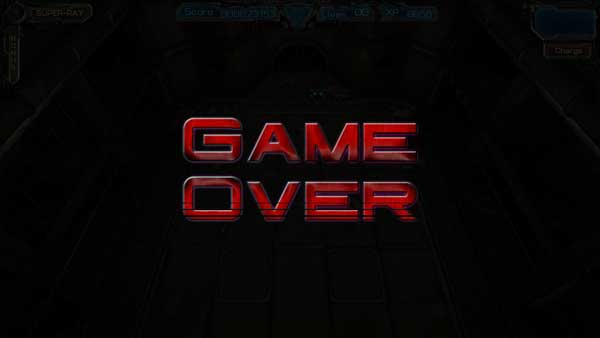 Once that happens you can return to the stage you were just playing, but the game will charge you a “Continue Score Penalty” for doing so, which are paid out of the experience point pool that the game gives you, which can be spent on upgrades and, yes, score penalties. In addition, the game keeps track of how many deaths you've had since you began playing, and both of these things together make me feel like the game is trying too hard. Yes, it has great graphics, yes the gameplay is fast and fluid, and yes the music is a fine backdrop against which to play, but don't keep yelling my failures in my ear and making me pay to jump back in. That's the sort of thing Carmaggedon did, and that game was utterly obnoxious.

Despite the fact that the last paragraph made me sound negatively disposed toward the game, I'm really not. I love that the developers have taken a genre that has been out of circulation for a while and built it up again as something new, fresh, and exciting. I just wish that it wouldn't try so hard to be so. To quote a man I consider wise, I don't believe everything in the past is worth keeping forever, but not everything should be tossed out the window because of its' age either. So, should you play it? Yes…but just don't expect it to be perfect.