You know how it goes. You're taking a well deserved rest from your knightly duties, playing on your DiversionLad, when suddenly a summons comes from your king, er, summoning you to the aid of the kingdom! 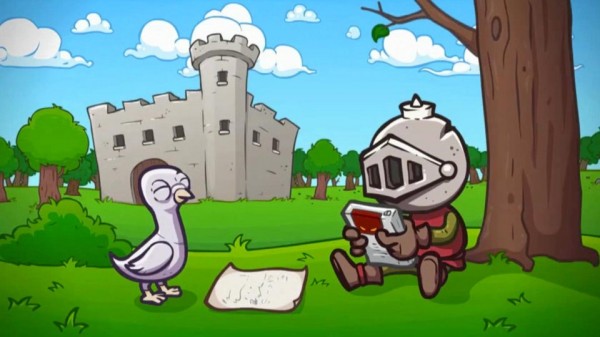 Oh no! It seems that a terrible monster has kidnapped all the princesses in the kingdom and has imprisoned them in a terrifying tall tower of terrors! 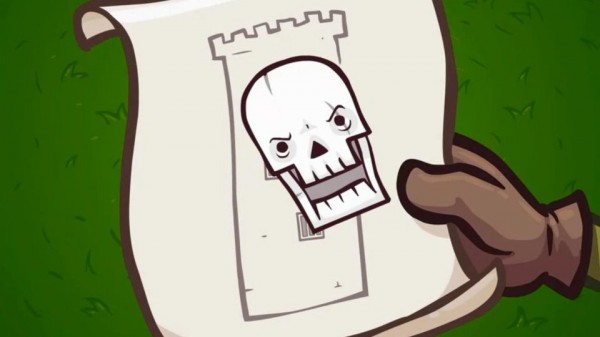 This is the moment, the moment when destiny(in the guise of a small pigeon) has come calling! There is only one man who can pick up the gauntlet (and then throw it away because he already has two), take up the challenge to rescue these captured fair maidens and defeat the evil monster who lies within! The risks are legion, the chance of death, injury, and the loss of a perfectly good suit of armor are high, yes, but loyalty to one's king is the duty of any knight! Right? 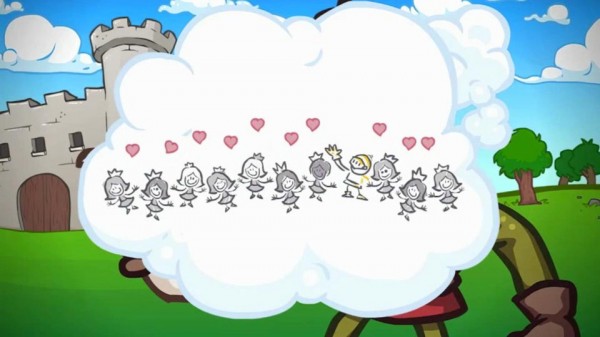 Whatever gets the job done, I guess…

Well, okay… maybe it's not the only reason, but never mind! The challenge lies before you, brave knight, so… go and do your thing so I can finish this review. Go on, shoo, shoo!

Have fun storming the castle!

Knightmare Tower is as least as curious as the unlikely denizens that you have to struggle against whilst playing it. It is part reverse tower defense, part juggling routine, part button masher, and the rest is what Angry Birds would be if it really let it's bestial side come out and play. This game sports all the usual trappings of video games…health, upgradeable weapons and armor, and gold to stockpile to spend on various improvements. But while all these are certainly important while playing Knighmare Tower they are not the most important aspect of the game. That would be speed. 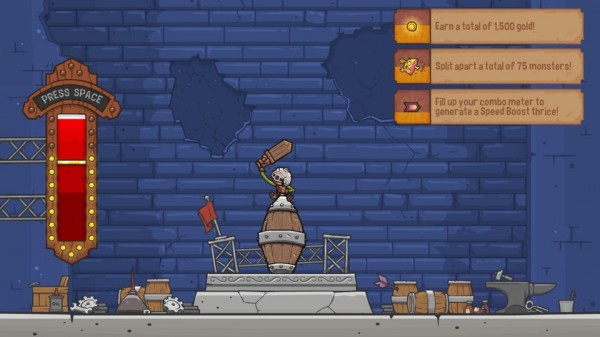 We need no owner's manual!

You start the game perched atop this insanely dangerous device which, once you've hit the space bar, catapults you high into the air. A speed gauge appears in the upper left corner and it behooves you to keep a close eye on it for the quicker you go, the less likely it is that the flood of lava that inexplicably rushes up from the lower levels of the tower will be able to catch you in its' overheated embrace. Said simply? Kill everything you can unless you want to end up as a particularly misshapen baked potato. Each monster gives you a boost of speed once you kill it, not just by attacking it, and if you don't make any kills you go slower and slower. You have various items and upgrades that will help keep you aloft, but in the end it's all down to how many baddies you can take down. Even the princesses help; each princess you rescue provides either an ability or an upgrade to an existing ability that will aid you. None of this “your princess is in another tower” stuff. 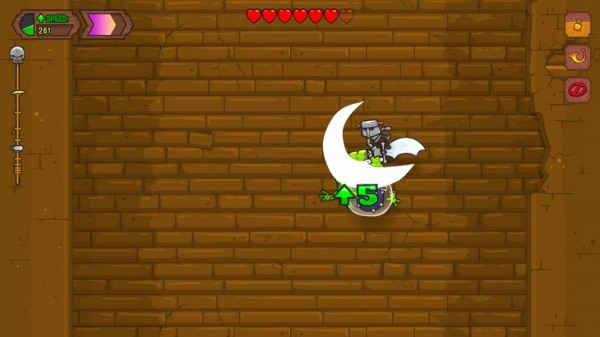 This description may make it sound like it's a button mashing slash 'em up, plain and simple, but surprisingly I found I had to perform a lot of tactical thinking to win this game. There are two basic types of enemies: ones who fly and the ones who can't. Most non flight capable monsters can be taken down in a hit or two, making them ideal for keeping your momentum going, whereas the more hardy flight capable monsters will hang around the screen, often shooting at you, and making it harder to take down the easier targets. Which do you do first, how many, and when? Your mind will be flying just as fast as your fingers are, that I can guarantee. Constant button mashing won't help you either… make one slash too many and you'll fall and lose speed. This is an incredibly addictive formula; I played 23 minutes of this game when I was learning how it was played… which stretched into 61 minutes… and now I've just reached a grand total of 113 minutes playing this apparently very simple game. The concept is simple, sure, but mastering it can take a great deal of your time. That being said, it's worth the time you put into it.

However, that doesn't mean the game is perfect even if, as my brother recently said, The Godfather is. The emphasis on always making the right moves, the sudden rise in difficulty that can make even a single mistake fatal, and the monsters that can take several slashes to dispose of (thereby putting you inexorably closer to the inexplicable rising tide of lava) can lead to some exasperating moments. The game is difficult, make no mistake, but I never had the feeling while playing it that the difficulty was artificial or put in there to pad the play time. The game offers you plenty of tools and techniques to get around these obstacles so, when I failed, I found it was entirely due to mistakes I had made, not due to anything the game did. One thing that did bug me, though… at the top of the tower there is a chamber, under which is a solid sheet of steel that you have to break through in order to find the giant monster that did the kidnapping (princess-napping?). However, to break through, you have to complete over 38 challenges that the game sets you against. This seems to be a spot where the mandatory should have been optional; you can spend gold to avoid these quests, but that seems like a solution to a problem that shouldn't have existed in the first place. Still, it's nice to have the option.

So, yes, Knightmare Tower does have moments that don't make it always a fun playing experience. That aside, though, it a well crafted game that knows what it wants to be and succeeds in its purpose very well. It has a rapid fast pace that will leave you unaware of the passing of time (believe me on that one), colorful graphics, music that seems to act as a catalyst for the adrenaline that will course through you during play, and most important it offers you challenge without taking itself too seriously, at least most of the time.

Now, if you'll excuse me, I'm going to play it some more.