Puzzle games have always existed within a predefined set of rules. Scribblenauts kicks those rules in the face, instead defining its own path towards the future of gaming. Despite being the first game that I got to try at E3 2009, it was the one that I thought about the most throughout the rest of the expo. A 2D puzzle game by design, Scribblenauts is only limited by what your imagination can come up with, offering thousands of unique possibilities which guarantees that no two people’s experiences will be remotely similar. So what exactly is it? 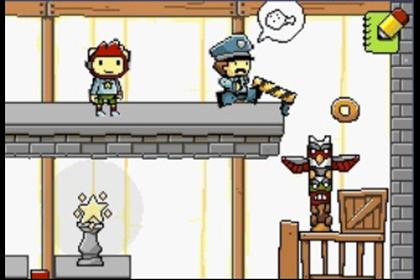 Scribblenauts is a stylus-controlled puzzle-platformer that has you guiding a boy named Maxwell to collect objects called Starites in each of the 220 included levels. There is nothing in the environment to help Maxwell reach these Starites, and many levels include hazards that the hero must overcome. To achieve his goals, the player must pull down a text menu, which allows you to type any word that you can think of. That word–if it can be manifested as a physical object–will then spawn in front of your character. For example, if there is a Starite located on a platform that is just out of your reach, you can create a ladder, stairs, a boulder, a ramp, a trampoline, a grappling hook, or just about anything else imaginable that would help you get onto that ledge. I asked the developer for a rough count of how many objects are being included in the game, and he said that he has no clue. The team literally went through the dictionary and created in-game representations for everything that they could find, allowing you to solve the puzzles using any method that you can come up with. 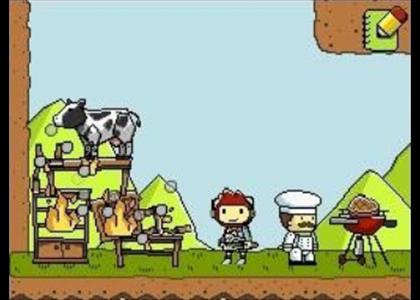 Each object that you spawn contains the properties that you would expect. Spawning a magnet will pull any metallic objects in the room towards you, while crafting a flamethrower lets you burn everything in sight. The game is surprisingly difficult to stump, as everything that I could come up with was wonderfully drawn and ready for use instantly after I’d typed in the command. One level presented show-goers with a zombie invasion, in which you’re tasked with protecting a girl. I tried summoning a machine gun and chainsaw to aid in my quest, but they were too slow to fend off the onslaught. A more ingenious strategy employed summoning brains as a distraction to lure the zombies away, then planting land mines to thwart the hoard approaching from the other direction. For good measure, you might as well throw in a T-Rex or Kraken to clean the place up.

The stylus handles everything in Scribblenauts, from moving your character to operating your new toys. Controls felt smooth, and the various items that I created—from a mech to a jetpack—were all a blast to use. The visuals are very pleasing, taking the storybook look of the developer’s previous game (Drawn To Life) and expanding on it with more character and a huge variety of in-game art.

The levels are divided into action levels and puzzle levels, each with their own unique qualities. Action levels encourage you to be as manically violent as you possibly can, while puzzle levels will appeal to your more cerebral tendencies. Each doesn’t have a set solution, forcing you to think about each situation and come up with the perfect object that would help you out. The developer mentioned that the game keeps track of which items you solve each level with. It then disables all of these items for your second play through, forcing you to come up with another way to beat that particular puzzle. How’s THAT for replay value?

From what I’ve seen, it looks like Scribblenauts will be an absolute must-buy for every DS owner out there. Yes, even you. The possibilities within this game are mind-blowing, offering complete freedom to the player. This freedom can be further explored by using the game’s level creation tools, which allow you to craft and upload your maniacal concoctions to share with the unsuspecting public.

Scribblenauts hits store shelves this September, exclusively on the Nintendo DS. If you want to hear more Scribblenauts talk, check out this episode of the Big Red Potion podcast, entitled “Changing The Game.”