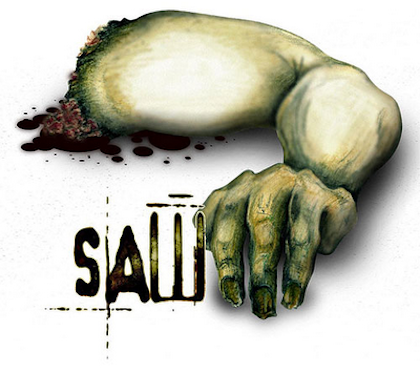 Confession time: I have seen every Saw movie. While some might view this as a form of self-torture, I must admit that they haven’t all been as bad as some would think. In fact, the Rube Goldberg-like torture mechanisms–as well as the horrifically bad acting from the always D-list cast–have provided worthwhile entertainment over the past five flicks. This year, Konami will release a video game set in the Saw universe, and I was left in a state of shock after playing it. It wasn’t the gore that jarred me, nor was it the sadistic elements that I had just witnessed. What truly surprised me about Saw was that the game was actually good.

The demo began with a familiar sight to anyone who has seen the films: a bear trap mask that snaps a victim’s skull in half. How pleasant. Jigsaw’s malevolent puppet appeared on screen as the voice of Tobin Bell—who plays Jigsaw in the films—warned me that I would need to act quickly if I was to escape with my head intact. Once I was left in control, it was up to me to figure out what to do. Twirling the analog stick moved a wheel on the device, and continuing to do so brought up a button prompt that released my character from his shackles. I asked the on-hand developer what would happen if I failed to hit the right button. His response was something along the lines of, “it isn’t pretty.” 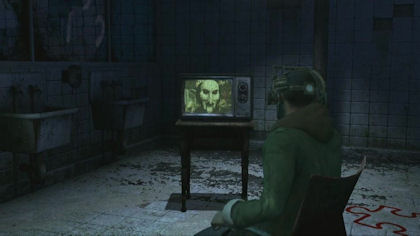 After getting back on my feet, I noticed that I was in a replica of the infamous bathroom from the original Saw. There was a locked door at one end of the room, and no other obvious method of escape. I noticed some red markings on a mirror, as well as similar etchings in the bathroom stall. After closing the stall doors and looking in the mirror, I saw that a passcode was visible in the reflection. “Wow, that was easy,” I thought, as I confidently strutted my way towards the door with password in mind. I then realized that I would also need a keycard to escape the devious lavatory, and the only remaining point of interest was a toilet bowl full of needles…

This is where things get a bit icky. A minigame pops up that has your character sticking his hand in the prickly pot to retrieve the prize at the bottom. You are shown an X-Ray image of the toilet as you guide his hand closer to the goal, trying to avoid getting stabbed too often. This was much easier than it sounds, as I had the key in hand within a few seconds. The cutscene that followed—showing your guy removing his needle-addled arm from the bowl—evoked the Saw style perfectly and proved a satisfactory seat-squirm for those looking on.

After unlocking the door, I continued through the desolate hallways and darkened environments. The game’s mechanics feel quite similar to last year’s Silent Hill: Homecoming, as you have to explore each location thoroughly to see if there are any tools that you can use for protection or escape. I was able to find a melee weapon right as I discovered another Jigsaw victim struggling to survive in a nearby room. Despite my earnest attempts, it appears as if he didn’t want to be friends. He charged at me with a pipe, forcing me to defend myself. The melee combat clearly isn’t the highlight of Saw, as it felt a bit clunky and detracted from the much stronger puzzle aspects of the game. Thankfully, this scene was brief and I was able to continue on.

Before the demo ended, we were shown a few fleeting glimpses of what was to come, including another unfortunate soul falling victim to one of Jigsaw’s games. We also saw some type of hospital trap, as well as several quick shots of the Pig mask used by Jigsaw’s cronies in the films. Though the demo was short, it whet my appetite for what could be a very solid action-adventure title. As long as the game focuses more on the horror, suspense, and traps and less on the face-beating action, Saw could make for a head-chopping good time when it ships this Halloween on the PC, PlayStation 3, and Xbox 360.