The true beauty of the original Mass Effect can’t be seen during one play through. The game throws an incredible amount of information at you, making it difficult to understand just how much is actually there until you take a step back and look at it as a whole. It’s like playing an epic symphony in a way, one that even the deafening silence of space can’t squelch. One specific area that the original game excelled at was in character interaction, which offered the player a level of free will not seen before in gaming. The astounding depth of the dialogue made the cutscenes feel more like they were a real time conversation than the predestined imaginings of a Hollywood bard, allowing those who were able to look past Mass Effect’s many shortcomings to soak in the majesty of an extravagant sci-fi universe.
In Mass Effect 2, Bioware dealt with the player’s ME1 decisions in a very unique way. The player is allowed to import their character from the original game into the sequel, which carries over the look, style, and story decisions previously made by Commander Shepard. While Shepard’s appearance and class traits can be changed, the choices that were made during the original Mass Effect play an important role in the progression of the sequel. Characters will be missing or dead, certain planets will either be thriving or on the verge of destruction, and Shepard will either have fans or foes waiting for him or her in each location, all of which are the direct result of choices made during the previous game. Thankfully, those new to the series won’t be left out in the cold, as all of the necessary back story is automatically filled in for the player.
As interesting as the character import feature is, the main plotline of Mass Effect 2 feels a bit patched together, with dozens of separate story threads being amalgamated into a jumbled heap. Despite that, the character interactions once again steal the show, as the voice cast is exceptional at capturing true emotion in a way rarely seen in games. Every squad mate is memorable, avoiding cheap stereotypes and hollow characterizations in favor of well rounded, multifaceted creations. Each also has some wildly different combat styles, encouraging players to evolve new strategies and select different characters based on the world that they are diving into. Mixing and matching crewmates keeps the game from feeling stale, and a balanced cast means that no character is truly better than the rest. 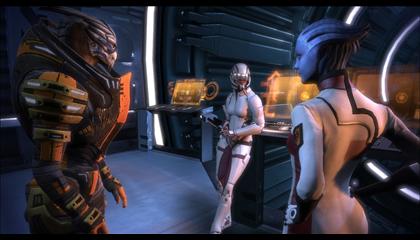 It’s apparent that Bioware spent a lot of time refining the gunplay for Mass Effect 2, as the clunky combat from the original has been replaced with some top notch shooting mechanics. The weapon accuracy has been finely tuned this time around, relying more on the deft thumbs of the player than a randomized roll of the dice. Location damage has been added to enemy characters, which becomes immediately noticeable once you blow the arms and legs off of a synthetic creature. The weapons are diverse and powerful, though a depressing lack of spec information means that a lot of guess work and experimentation are necessary.
Of course, Mass Effect 2’s flat difficulty curve will probably negate the need for much worrying. As players upgrade, the enemies seem to adjust accordingly, resulting in a mostly even fight that shouldn’t lead to much frustration. The downside to this is that you never really feel challenged, as the game lacks an epic battle or skin-of-your-teeth escape that leaves your body surging with adrenaline. Even more disappointing is the final boss, who bumbled around as I destroyed him with a single clip of rifle ammo. 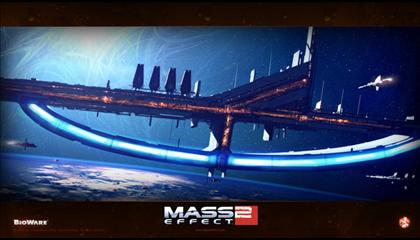 Also disheartening are some of the changes made to the RPG aspects of the game, as I felt no real need to power-level my character. Levels ups seemed to offer no real substantial reward, as the upgrades to your weaponry and abilities are hard to notice due to the constant difficulty balance kept by the game’s AI. Shepard never really becomes the unstoppable force that he could evolve into in the first game, as the ever-upgraded enemies always seemed to be on the same level as my character and the difficulty never really spiked later in the game.
That’s not to say that there’s no grinding in Mass Effect 2, as players must keep track of the universe’s resource economy in order to upgrade their abilities. This is a bit of a burden, as finding resources on each of the planets feels like random luck. Once the needed resources have been attained, players can use upgrade schematics to modify their weapons and open up a new world of hurt on hapless bad guys. This replaces the convoluted equipment menu of the original game, offering a much cleaner, more manageable interface than before. Money is also far more plentiful this time around, as I always had enough surplus cash to buy the useless junk that kept catching my eye. 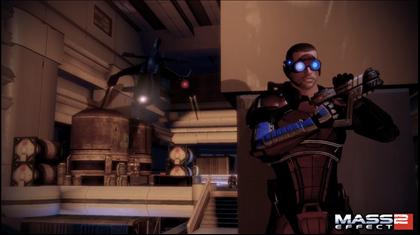 The structure of Mass Effect 2 is ingeniously laid out, as the linear beginning slowly expands into an open world adventure. The game almost feels like an old school platformer in a way, as each world contains a set number of objectives to deal with before moving on to the next planet. The missions contained within each area are varied and clever, thankfully moving beyond the ‘run and shoot’ objectives found in most of the first game. The much-maligned Mako driving missions have also been omitted, as have the eternal elevator shafts that plagued every corner of the first game’s universe. I only wish that the sequel’s cities offered a bit more to do, as they are all visually stunning and interesting to explore. Then again, it’s hard to ask for more when the game already contains over 35 hours of content.
When looked at as an overall package, Mass Effect 2 is a game that simply shouldn’t be missed. This sequel not only pushes the series to a whole new level, but also moves the entire action/RPG genre forward like no other. It’s an amazing example of a developer listening to fan feedback and giving people exactly what they want, and I shudder to think of the possibilities for what is yet to come.