Shinji Mikami’s newest title isn’t very Mikami-like at all, says Jeff Matulef after trying it out at E3.

Shinji Mikami doesn’t make normal games. While Resident Evil was a runaway hit spawning several sequels and spin-offs in the decade plus since its inception, it was as unconventional a game as they came back in its day. The constantly shifting cinematic camera, tank-like controls, and lack of ammo encouraging a more passive approach to combat forced players to unlearn everything they’d learned about game design up to that point. Even the more streamlined Resident Evil 4 stripped players of the ability to move and shoot at the same time. His side projects, P.N. 03 and God Hand were met with middling reception over their cock-eyed control schemes, but I’d always found them to be lost gems that rewarded skill and patience in spades. For better or worse, Mikami’s latest game, Vanquish (his first at the relatively new Platinum Studios formed of many Clover alum) is his attempt at making a more accessable game and if the E3 demo is any indication, he’s succeeded.

Think back about half a decade or so and shooters all played rather similar. Suddenly slow-motion became a mainstay in the genre and a couple years later cover shooters were all the rage. Astoundingly, few games have thought to merge the two and Vanquish has capitalized on this idea in spades.

At a glance Vanquish resembles Gears of War with its beefy soldiers in a futuristic setting. It’s a bit cleaner and lighter than Epic’s opus, bringing about a hint of P.N. 03 in the process. Soldiers hunker behind cover and take potshots at the opposition, and it might not look that original at first. Put your hands on the controller and that all changes.

The chief new mechanic is protagonist Sam Gideon’s Augmented Reactive Suit. The suit allows him to go into slow-motion, making everything glow purple and marking enemy weak points, when he does one of three things. Aiming while initiating an evasive roll is the simplest way to activate it. Vaulting over cover is another method. And finally, sliding along the ground is the most prominent (and fun) method. Sliding is a lot smoother than running in Gears of War, and while sliding adds to the same overheating scale as slow-mo, you can go a pretty far distance before having to worry about it. You cool down fast too, so overheating is not nearly as annoying as it could have been. The Augmented Reactive Suit has one passive ability as well; if you’re an inch away from death, slow-mo will kick in at no cost until you’re at least partially healed up (recharging health is yet another distinctly non-Mikami concession to the genre). 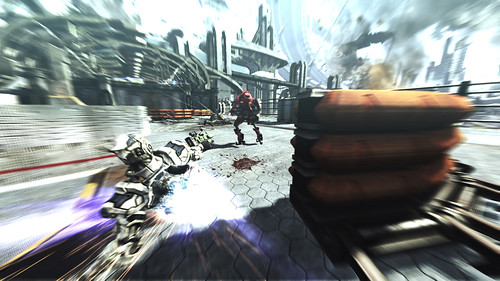 The demo I played had Sam storming an enemy facility with a few squadmates. You have no direct control of your squad, but they do a good job helping you out. If they’re wounded, you can help them at the touch of a button. Fighting enemy soldiers took a good deal of strategy as they do their best to flush you out. This is certainly not a cover shooter that has you sitting behind the same wall for minutes on end. Once all the regular enemies were dispatched, a boss battle came up — a giant metallic spider/tank. This is where things got interesting. In order to take it out I’d have to find as many opportunities to utilize the Augmented Reactive Suit as would allow me to focus on and take out the weak points on its legs. Once enough of its joints were damaged I’d get a good shot at the core. Ammo was limited and I constantly had to slide from cover point to cover point as I scavenged for more resources. At one point the boss let loose a flurry of missiles and it began to resemble a bullet-hell shooter in 3D.

Another level I was shown took place on a moving train that circled the perimeter of the city. Strangely, the metropolis was built along the interior of a giant cylinder, so at any point you could see almost the entire landscape. It was a pretty sight initially, until I realized the whole interior-of-a-cylinder approach is a convenient excuse to recycle the same background as you’re just going in a circle.

Curiously, there will be no multi-player as Mikami feels that the game mechanics wouldn’t hold up with multiple players. This seems odd, because at no point are you alone in the demo, but perhaps that will change in the full game.

Vanquish may not initially feel like a Mikami game, but that’s not necessarily a bad thing. Rather than force the payers to wrestle with unusual controls, he’s actually improved upon the standard cover-shooter mechanics that I’d always found clunky. Little is known about the story (something about Americans fighting Russians over depleting natural resources) and from what I’ve seen the art style seems curiously vapid. However, its polished controls, clever implementation of tried-and-true mechanics and amped up action conspire to make Vanquish an action game worth keeping an eye on.