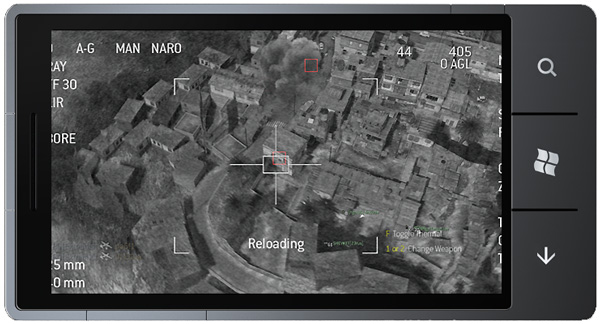 Alex Davies (RGBFilter) recently interviewed Greg Milligan (Microsoft Canada Mobility Solutions Manager) during the Microsoft X10 Conference in Toronto and they discussed some of the gaming features that will be coming to the WP7 devices this Holiday season. What was learned from this interview is that some pretty amazing things are planned for the soon to be released Windows Phone 7 and gaming with it on Xbox Live.

When the phone was first revealed back in February, it was shown to have the ability to play games on multiple platforms. The example showed you playing on the Xbox 360 console first and then saving the game at a point. Later picking it back up where you’d left off on a WP7 device and then progressing it a bit further along. Finally, you could login via Games For Windows Live on your PC and then play some more if you liked and go back and forth on the platforms. This is all part of Microsoft’s “Three Screens in the Cloud” campaign and awesome features for by far, if the right types of games and integration takes place though.

On the other hand, some of us gamers are really looking for more of a real time gaming experience and the ability to perhaps have more of a cross platform live gaming experience with their friends. So here is what Greg had to say on this topic and what we can look for in the future of Windows Phone 7 gaming and Xbox Live.

“We are working on real-time phone-to-console, likely initially through Wi-Fi,”

“That’s not on day one… Day one will be turn-by-turn as well as companion-type gaming where you play a level on the phone and it may unlock a level or a weapon or some special achievement on the console game. But yeah, absolutely working on phone-to-console real-time. That’s something we’re working on and expect to have in the near future.”

Sounds like great news for sure on things that are planned for later on, but I’m hoping they’ll take this even farther and give us even more of an immersive gaming experience with these WP7 devices. Now if they can integrate Xbox Live from the Xbox 360 console with WP7 for gaming and real-time multiplayer, then what about some Live enable, solo campaign features and using the phone along with the Xbox 360 then?

Why not synch up the WP7 device with your current gaming session and then use it for those parts of the game where someone is feeding you Intel? So instead of having to use a portion of the TV screen for all of this, why not allow the WP7 device to see the map layouts and to view real time data of the game your playing? What if you could take your phone and move it around, allowing you to view the items in a room and then snap photos within the game for Intel gathering?

The cool thing is a lot of this could even be used for offline planning and fact finding missions and mini games. You can go through all of your Intel and plan out a mission in advance and then synch it all back up later to execute those orders when you are back at the console. It sounds cool to me… if they can pull it off and enhance things this way. One thing is for sure though, I don’t expect we’ll see anything quite like this from another phone or platform anytime soon.

So when I’m reading something from a book like The Fall of Reach and a character is depicted as looking at targets on the screen of a Data Pad, then sliding it back into a pocket; maybe we’ll start to see similar options like this become available for the Windows Phone 7. Next time you call in an Air Strike, it might be from a WP7 device and you can simply touch the screen where you want it to strike and then sit back and watch it on the big TV screen in real time.

I could go on and on here with ideas for games like Halo, Gears of War, Modern Warfare, Rainbow Six Vegas, and Mass Effect to name just a few. What I’d really hope is that the Developers have already started to think about these types of things and begun to play around with integrating them more and pushing things as far as they can. Casual, quick games will be a lot of fun… its a given, but lets look at being creative and build some immersive gaming experiences as well now. So what type of integration and game features would you like to see between the Xbox 360 and Windows Phone 7?