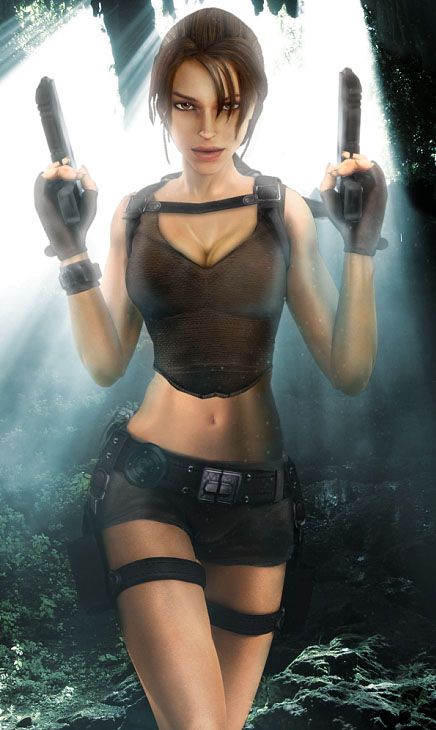 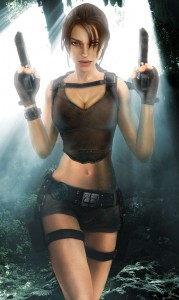 With a strut like that, it's ok to have a photoshopped background.

I am a gamer (perhaps not a confession you should come to in a group of friends who decide what’s en vogue in your area) and I disagree with how this particular kind of Homo sapiens is portrayed in the media and general conversation: that is, pitifully or not at all. 2010 Anno Domini is just another year in the constant flow of surprises in the last decades, some unimaginable to our grandmothers without making  their cheeks flush a deep purple – gay rights, organic food, continuum of investment in nuclear power despite the fact that Chernobyl has become a radioactive jungle of mutated unicorns and lizard people, and – wait for it – the genesis of guides to better sex and instructions how to find your very own g spot, comparing to which globalisation of Victoria’s Secret isn’t quite as shocking anymore. In short, the world has changed and the one thing that has remained the same for decades now is the fun-poking at gamers and the understatement of the influence the gaming had and has on popular culture. Too wordy? Let me re-word: we don’t suck. Video entertainment doesn’t suck.  We were just told we do by the same people who wore their polo shirt collars shamefully popped up in their teens.

I don’t comprehend why the games industry is so dramatically underrated – its status incomparable to the films’ industry even though it has just as much good, bad, masterpiece, crap. And icons, symbols – the films have James Bond lately played by Craig David (and for years, quite unfortunately, now Mamma Mia’s Pierce Brosnan), Michelle Pfeiffer and a 3-metres long avatar (pardon me: na’vi). The games industry boasts Tom Clancy instead of genius directors, Cloud Strife as the sexually confused Disney teen idol with a Schwarzkopf-stylised haircut, and Alma as Lindsay, as despite all the respect I have for the F.E.A.R. series, Alma’s hobo look does make a compulsive painkiller addict spring to mind. If the graphic artist’s effort to make these characters’ visage look perfect even in a middle of the most murderous ambush – an unrealistic trait games share with films – isn’t enough to seriously reconsider the importance of games nowadays, I’d wonder what is. Never to mention the absolute A-lister in all this, a (non)domestic goddess many millions of dollars’ worth, silicone and restylane included.

Miss Lara Croft – posh British accent obligatory – is still as ripe as she was years ago. But cynicism aside, Lara was a very important character to me in my gaming path which inevitably led me to writing about gaming, and one of the few female protagonists in the industry who, when in threat, do significantly more than cry in the corner and poke themselves in the eye with their mascaras in a masochistic punishment. Lara is a symbolism for today’s strong, liberated woman. While she fights the mercenary snipers in the rain forest jungle and could easily out-spiderman Spiderman if there ever was a liana contest between the two, we fight the urban jungle alongside the annoying Starbucks guy and usually still have to shout twice as loud as men to have our opinions heard in the workplace. Croft is everything most women aspire to be today: she’s brave and individual, she’s agile, self-assured, beautiful, and her confidence doesn’t end with her workday. It goes without saying, Lara impresses us with her ability to survive alone. I have never witnessed as male counterpart she was especially affectionate towards in any of the games; in the films, there were allusions to sexual tension and to some relationships in the past, but this particular woman seems above anything as trivial as pouring her sweat in efforts to make a relationship work. Decades on, she remains single and perfectly okay with that – though her reasons for prolonged singledom are perhaps different than ours as I doubt Lara would put on weight post-breakup and not wear that pair of jeans again.

Still, there is much more to Lara that just a well animated character in a well animated series – what she presents is a state of being. She became a real and almost touchable idea, a way of life. Some radical feminists accused miss Lara of being a yet another walking proof of deeply rooted sexism in our (pop)culture – a woman oozing sex appeal, apparently strong but of course looked at mostly due to her incredible physique and looks. To those feminists, I therefore announce: doing acrobatics fifty feet in the air with an MK assault rifle, with a large behind is an inconvenience, to say the least. Do reconsider, ladies.

I appreciate Lara Croft. I appreciate the idea the creators of Lara Croft had in their minds when they put her to (her computerised) life. The reasons behind this – which everyone’s thinking they know right now, but not necessarily – is not her promotion in a healthy body image, or at least, not primarily that. Sure, there was the whole “look like a heroine junkie, dress like one” waify trend that emerged in the 90s and was quite popular since then, creating hordes of pole-straight, chest-flat and unsexy models. And yes, it almost became a crime to have a normal woman’s body while the nearest person starving and in need to have food pumped into her stomach is no longer the Ethiopian child from the Oxfam leaflet but the painfully brittle Kate Moss, who not only followed the “look like a heroine addict” rule, but took the fashion a step further by actually becoming one. Yes, sure, I’m positive Lara makes a positive contribution because her body is realistically rounded where it needs to be – but I won’t even get into that, because to me, anyone who doesn’t think a woman should have a woman’s body is a bit crazy, finite.

The much more important detail of Lara’s mission as an icon was not that of a normal-sized woman; it was, most significantly, that of a strong woman. The only people who would claim women were made for staying at home and live their lives baking and putting icing on cupcakes to the joy of their money-making husband after Tomb Raider hit the sales must have been people living on a deserted island, who ticked the hairbrush option in the one-item-you’d-bring application, rather than a laptop with broadband. Anyone can argue that she’s just a fictional character – without realising, these folk are actually strengthening my viewpoint. Some of the strongest, most influential characters that inspired people in the real world are fictional. Ask anyone who did English Literature in school.

I don’t want to get into the tales of the sexual revolution of 1968, of how women’s rights have changes since then, of how much more freedom we have then. It’s all too much very sophisticated information for a modest column like mine. When focusing at the role of females today, I like to think that we’re ¾ of the way there: at the basic army training at the ATR, women might have the same sit-ups entry requirement as men, and except for certain upper body strength exercises, much the same effort is expected of them. Still, despite the fact we are no less capable in many ways, and we have been proven to be more resistant to pain than men ( past studies have shown that if it were men who gave birth to the daughters and sons of the nation, we’d have an infant death rate 6 times higher), upon considering joining the army I find that most of the combat posts are opened to men only. To be honest, I have no idea why that is – as long as I accept that a woman would never make a superb pack mule, that is the only argument that really convinces me in the chaos of nonsensical rants about “tradition”. One of the arguments I had thrown at me (by a guy slightly younger than me) was that in a situation when a woman is hurt, say, in the chest area, it is “imprudent” to treat the wound in a company of males. “Oh, honey,” I wanted to say, “I think when a bullet goes between your ribs with the strength of 800 fps and you’re pretty much done for if you don’t get help quickly, showing your charms to the world is probably very low on your lists of concerns”.

Now hold on a second. Is this crazy woman trying to tell me Lara Croft had input in women’s rights to join armed forces? Uno – you haven’t seen me crazy yet. Due – no, that’s not exactly what I’m saying. I wouldn’t say Lara Croft is directly the reason women were allowed in the military. At the same time, Lara Croft, alongside G. I. Jane and Charlie’s Angels, belong to a very elite and rightfully praised society of female icons who very subtly, but very efficiently, influenced women and the mainstream culture. Every time a woman, especially a young girl (like myself at the time of my first encounter with Lara) witnesses a character like this, a head-strong and robust woman who fights like men, keeps her stance like men, but is one-hundred-and-fifty percent of a woman, you’ll find her pupils dilute, her eyes glitter, and cheeks flush deeply. No, she doesn’t fall in love (well, some women do) – she’s shown an icon that makes her realise that she can say, “Oh yes, I can”, which can be applied to a lot of areas of life, not just being strong in the primary, physical meaning of the word. A character like this starts of a process of realisation – and everything starts off with a realisation. 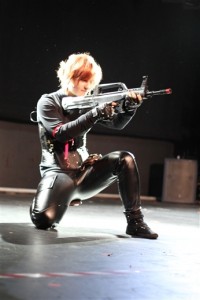 In the midst of her frivolous youth, Catgamer sets out on a mission – to out-Croft Lara Croft. Succes rate so far: poor.

I was visiting my grandmother not so long ago. Because I’m a pretty assertive and hearty young woman, and I freely admit to having physically beat up a young man who dared to walk into my room while I was changing and comment my bust, Grandmother was very fixed on the idea of calming down my attitude so that I don’t have a problem finding a boyfriend (though I can’t say I noted any difficulties so far). Her advice was to be quiet, humble, not talk back and agree with what my ideal future man says, for the sake of making him happy with himself. The problem was, my ideal future man would understand that I never was this kind of a person, and probably never will be. Sorry, Grandma. It seems I’ll have to find a possible marriage material my way, when I decide to do so. But I don’t blame Grandmother for her thinking. After all, she never owned a computer. And she sure as hell never even heard of Tomb Raider. Visit the original at http://catgamer.wordpress.com

All I can say is that I’m a compulsive cynic, talker, reader, self-confessed writer and gamer. Until recently, one of the 1% of the Western population without a Facebook (now there’s 0.99% of them. Sorry, guys.) - follow me there shall you feel the urge. Because I always found it difficult to stay serious for a period longer than 10 minutes, my columns will concern games, but not only that, and there will be plenty of occasions to go offtopic – which is another thing I love to do. Join me in meowing about games.