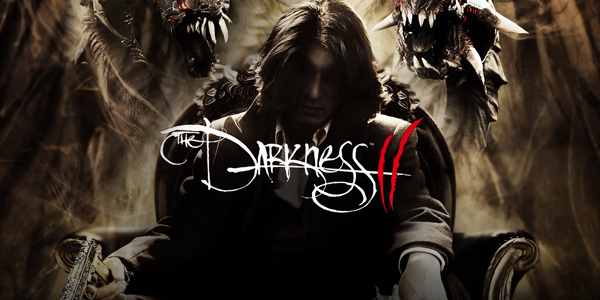 THE DARKNESS™ is here again people badabing! baddaboom! Yes our favourite Italian American gangster is back for another outing in the originally titled THE DARKNESS II™ published by 2K GAMES and DIGITAL EXTREMES. JACKIE ESTACADO the hero of this outing is the man who controls a force known as THE DARKNESS, and of course being a mob boss makes him quite a formidable character.

In the first game, THE DARKNESS™, we followed Jackie as he was introduced to The Darkness, the second one follows him as he deals with what he has become, tortured by the death of his girlfriend Jenny. OK the plot is pretty thin on the ground, it revolves around your character going to various places and kicking bottoms in a slash fest of gore and mayhem. 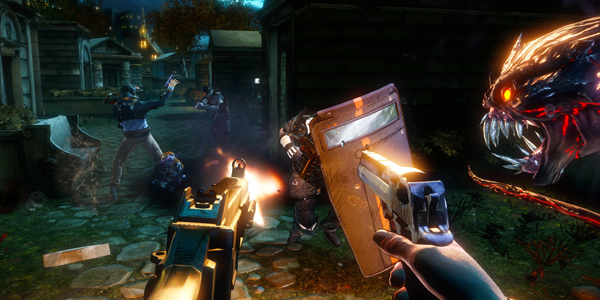 Jackie has the use of both arms for carrying and shooting weapons including Dual Wield mode which is cool, and to top it off he has the two large tentacles which are great fun to use, ripping up opponents and tossing them asunder. This element within THE DARKNESS II™ is the most fun, as you receive experience bonuses for imaginative kills. Those experience points can be used to buy more upgrades which will then increase your killing creativity, and it certainly gives the game a new degree of excitement and element of originality.

Don't get me wrong folk's, this is not the perfect FPS game, it does have its flaws. There are plenty of glitches and animation faults, but nothing bad enough for an early termination of game play. I did think the use of bad language was somewhat extreme. OK most of us swear and it seems to be the norm these days, but I found the use of it excessive and unwarranted. Not all gangsters swear all the time I am sure (not that I know any mind).

Another element I also found annoying was the voice over for the DARKLING character a sort of cross between Golem and a monkey. This is the guy who helps you throughout your progress, but why did they use a mockney BRITISH accent? We all know our colonial cousins think we live in Mary Poppins land but WTF is this stupid accent all about? (Curse DickVan Dyke and his chimney sweep accent). Apart from that, the rest of the game is not bad. OK it's never going to be up for game of the year (in my opinion). Then again Assassin's Creed: Revelations did well and I thought it was a mediocre game.

The actual look of The Darkness 2 is a sort of graphic novel look which suits the game well. It doesn't even try to be realistic, except for the bad language. There is plenty of gore and the action is pretty full on. Skipping the cinematic/cut scenes is easy so you don't have to follow the mediocre story line if you don't fancy it.

There is a reasonable choice of weapons, but none are particularly accurate. I found slashing the best way to kill multiple targets. You can pick up objects and throw them at enemies, resulting in impaling, slicing or blowing them up. In fact you can (with the right upgrade) pick and throw the Darkling at enemies to keep them occupied whilst killing someone else.

Whatever you do stay out of the light! (hence the name The Darkness) as you are reminded by your inner demon. This is of course your kryptonite, and as the game progresses, you will learn to take out lights, while avoiding enemies throwing light bombs and carrying torches. You can stay in the light for a brief period, but your demonic side disappears and your self-healing powers no longer exist, so best to stay in the dark if you know what's good for you.

The campaign itself isn't very long, around the 6 hour mark. But you can play it on harder settings to drag it out. 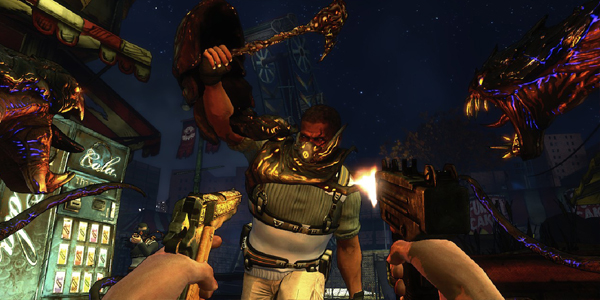 Of course you guessed it, the on-line multi-play is the best element of the game. VENDETTAS mode allows up to 4 players to take on missions as Jackie's hit men. The missions take place at the same time as the campaign and the main focus is mainly on retrieving relics from Brotherhood agents. This is the real fun part of DARKNESS 2 and extends the playing time considerably.

THE DARKNESS 2 is one of the best FPS games to come out so far this year. I can't see it winning any prizes for originality though. Mind you it is fun to play, especially on-line. Therefore I give it 8 out of 10, it is worth playing, and I did want to come back for more, just the over use of bad language and the occasional glitch spoiled it for me.