We don't usually review most iPhone games because they are mostly want-to-be-like types. The iPhone game "BOMB PIGS" definitely falls into that category. This tower defense, or more appropriately a "blockade defense", apparently tries to capitalize on the phenomenal popularity of the game "Angry Birds".  Unfortunately, in this reviewer's eyes, it fails utterly.

The game's basic premise is simply to use a limited amount of various materials to protect some quantity of birds at the bottom of the screen from the incoming barrage of bombs from flying pigs.  It is turn based tower defense at its simplest; guess at where the bombs are most likely to hit, put the bits of material you're given as barricade over top of birds, then press button to start. No turrets, no abilities to shore up defenses during attack, same pigs, various size and shapes of birds (which doesn't make any difference). The only variation here is the amount an type of material available and a couple different plane styles (red ones drop multiple bombs, blue ones single.) The build phase is not timed, the bombing run is set to countdown 30 seconds, although in my experience, after 25 seconds, the bombing is over. Anywhere from 10 to 20 planes can fly over, although not all of them drop bombs. If one bird has to died, the pigs win. You can replay it or go to another unlocked level.
The instructions are one page in English with 3 simple illustration and are easy enough to follow even though written by a non-native writer. But after that you're pretty much on your own deciphering how everything works. 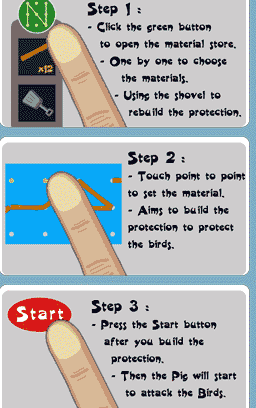 There are twelve main levels and three bonus, which are unlocked once you beat the first twelve. It actually doesn't make much sense to call them bonus levels, unless there's some mechanic of scoring that is required, which is not obvious in this game if there is. There is no description of the different types of barricade materials, but its easy enough to figure out what is strongest after a few passes. And a few passes it will take to figure out what works best.  Each level adds a bit more or different material and more bombs. The only thing that is impenetrable is a crystal looking piece, of which isn't available until you get to level 9 and you only get one at any time.
There is a shovel looking icon which allows you to delete placed barricades before the bombing run is started. It can be a bit tricky and frustrating to use at first because it behaves so much differently from all the rest of the materials. TIP:  it doesn't stay selected like the other materials do and it's not centered on your finger tip, but a bit above it. 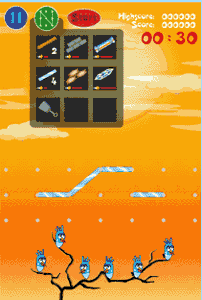 The only thing during the build phase that was more frustrating to deal with than the shovel thingy, was the sound.  The bird chirps were especially annoying, mainly because they seemed unusually loud and always on.  I did find relief once I spotted the icon to turn off the sound at the opening scene. Unfortunately that also turns off the pig bomber sounds too, which run only during the game load and attack phase, and are are rather amusing.  They sound a lot like the sounds made as kids when holding the model plane you just built and are swooshing around in the air.
Scoring is a great mystery, how and why you get any type of score is simply calculated and shown for just a brief instant before you're whisked to another screen. There's a high score display as well, but it has never shown anything but zeros for me. 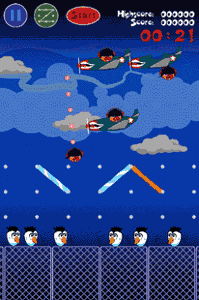 This game appears to be a quick and dirty try at being an Angry Birds wannabe, which fails. It is worth a try IF you have a $0.99 to spare or it's free to play.  Otherwise there are much better games out there, with more challenge, variation and replay value.