Personally I have never been a fan of Formula 1. Gone are the days of spectacular crashes, playboy racing drivers and cigarette sponsorship. Today it's all very clinical and more of a science than a sport, where most drivers are in bed by 9 PM with a protein drink. So when Codemasters sent over their latest F1 game, aptly named F1 2012, I wasn't overly excited about playing it. Yet as a driving simulation fan, I gave it a go and the result is amazing! I have a new born respect for the likes of Lewis Hamilton, etc. because F1 2012 is a real insight into this technologically complex sport.

This is unlike any other driving simulator I have played before. The realism and handling of the cars is unprecedented, and using a gaming wheel adds to the experience. F1 2012 really immerses the player in the world of F1. It's not simply jump in and start racing, oh no… There is a one hour tutorial at the start called the young drivers test that teaches you through the use of videos and driving tests, familiarising the driver with all the workings of an F1 car, which is invaluable when it comes to starting your career.

The game is indeed a challenging one! Not only are the obvious drivers included, but also team members as well to add to the realism. You will receive e-mails from other teams making you offers as you progress and hopefully improve. Speaking of which, this is where the real challenge begins. Unlike most driving simulators, you have to abide by the F1 rules. So you can't just tear it up around the track, barging past other drivers and taking short cuts, as any infringement can result in penalties and even disqualification. So watch out!

I literally felt exhausted after pushing my car to its limit, trying to shave off a fraction of a second of my best lap time. Again, one can really appreciate what a real F1 driver must feel like after a Grand Prix. This game is exhilarating and very challenging! 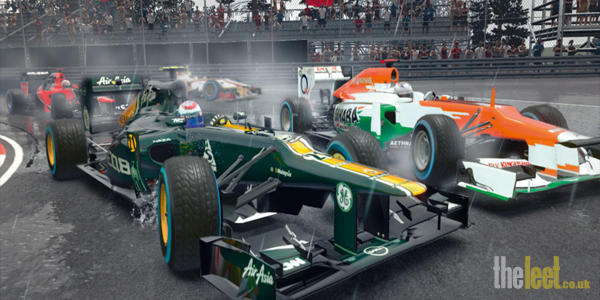 If you're a newcomer to this kind of game, then don't be put off. There are a number of driver assists available like braking, traction control and racing guidelines to help you get to grips with the car. As you improve, the less assistance is used and the more exciting the game becomes, with every gear change, braking manoeuvre and pit stop decision up to you. Along with other options, like setting the car up before a race to maximise performance, it all gives F1 a real feeling of involvement. OK, it can be frustrating at first when you keep finishing last and each race is a nightmare to get through, but stick with it and you will soon improve.

The actual main content of the game is varied with the proving grounds being probably the most accessible to newbies, with time trial and time attack modes being part of it. Both are fairly similar yet still challenging. Champions mode is a selection of six challenges against some of the biggest drivers in F1, with you trying to out race them, which certainly isn't easy.

Of course the real challenge in this game is the career mode, where you work your way up the league tables, impressing all the big wigs and the press, and where you can move to bigger and better teams, hopefully becoming world champion. Don't expect it to be over in a few hours though. This is a long game and you really have to put in the effort if you want the rewards.

There is of course an excellent on-line and split screen mode available so you can pit your skills against other real drivers, again a real challenge as there are plenty of serious F1 enthusiasts out there. There is also a feature called flashback that enables you to rewind the action and start a particular section again after say a collision or a spin off. I personally stayed away from this element, as I found it to adversely affected my performance and concentration.

The graphics in this game are very realistic with weather changes a big part of the gameplay. You can actually see the storm clouds gathering as you are racing and its down to you to make that decision to change your tyres before it rains, changing your style of driving almost immediately. 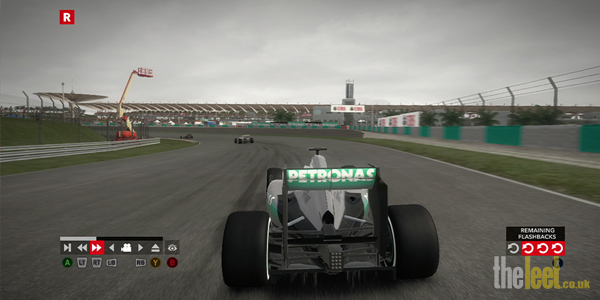