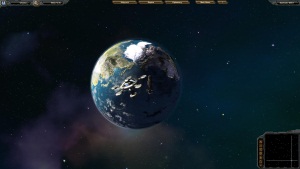 There are fewer things I find more satisfying in video games then being able to take a more strategic approach to situations. Even when the option of just applying violence to the situation is readily available, which is the case more often then not, I enjoy being able to circumvent a difficulty with no violence at all or, failing that, resolving the situation with use of tactics. That's why I was intrigued to be able to play the beta release of Star Drive, a space strategy sim devised by Zero Sum Games.

There's no real “story” behind Star Drive because the game just gives you the tools you need to create your own story and then quietly steps out of the way and lets you get on with it. There are four playable races in the game each of which has their own strengths and weaknesses, much like what you find in Sid Meier's Civilization games. These strengths and weakness are divided up into three categories: Physical, Sociological, and History/Tradition. The Cordrazine Collective, for example, have a bonus called Alluring which gives them a 20 point bonus(out of a 100) in any diplomatic encounter they have with other races. You can also tailor each race however you want, but you can only play as one of those four races. No sneaky making up your own culture. 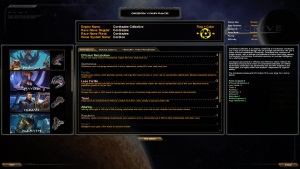 When you finally finish solving the question of what you want to play as, you can choose how large you want the game map to be, change the difficulty level, and change the number of habitable worlds. Once that's done you reach the game map itself which is displayed in the traditional 2D looking down format that games like this had been using since they were first invented. There is some flexiblity with the game camera, though, allowing you to zoom out so you can view the entire galaxy, and move the camera side to side and then zoom in to look are certain parts of it close up. Nothing too out of the ordinary here, so onto…the gameplay!

Playing Star Drive reminds me of what Douglas Adams wrote about the Infinite Improbability Generator…you can do a lot with it, but you have to know how first. Therein lies the problem because there are lot of mechanics to grasp and even a player accustomed to games like this may feel that they are floundering. Fortunately for you the developers at Zero Sum Games have installed a few features to make your adjustment to the heady realms of galactic politicking less painful. Most useful of these are the tutorials which take you through several sections of the gameplay-with both audio and video- in order to make the learning curve much less sharper. There's also the matter of planetary adminsitration which can be done in one of two ways-manually and automatically. The manual way involves dragging three slide bars back and forth to strike a balance between monetary gain, food production, and scientific research. If you don't want to bother with that then you can the automatic mode, which is dubbed the “planetary governor” to emphasize one of these modes over the other and which can be switched to whenever the player desires.

Despite this thoughtful gesture, however, there are segments to the game that do lead to a fair amount of head scratching. The most confusing to me of these is the matter of ship design. I may just be spoiled here from playing games like Starcraft, Homeworld, and Command and Conquer but I've just become accustomed to telling the computer to build me a ship and then sitting back and letting it take care of the rest. Not so in Star Drive; when you activate the shipyard you are offered a choice of ship templates which then appeared as an outline covered with blocks that have to be filled with such necessaries like power plants, defense systems, and storage. If you don't put these together properly then the game will tell you to start again. This caused me the most frustration and confusion because it seems entirely unnecessary; so many games do this segment of a game automatically, so why did the makers of Star Drive decide to turn it into a jigsaw puzzle in space? 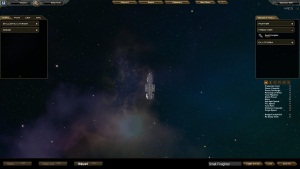 Anyway, all that aside, my initial view of Star Drive is that there's a lot to like about it, but there are a few segments of the gameplay that won't appeal to people who don't like to deal with the nuts and bolts of gameplay. It's good points are the diversity of races, the ability to switch between manual and automatic gameplay, and the size of the maps. The flaws of the game are not game breaking but may not appeal to many gamers, even those who would otherwise be fans of this particular game. Star Drive is a very slow paced experience, and requires a lot of detail work to keep up with it properly, and the computer can only help you out in limited ways.