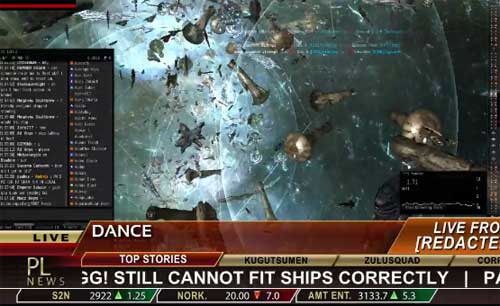 Earlier today an alliance in the N3 coalition (composed of Pandemic Legion, Nulli Secunda, Insdious Empire and various other smaller groups) missed a bill payment for the system where Pandemic Legion is staging and storing their fleets. This missed bill caused sovereignty to drop across the system leaving the station vulnerable to capture. Seizing the opportunity, the CFC (Goonswarm Federation, Razor Alliance, Black Legion and the Initiative) and Russian Coalition (Solar Fleet, Darkness of Despair and Against ALL Authorities) captured the station.

In an attempt to re-secure the station a rapid response fleet of carriers, supercarriers and Titans known as "the Wrecking Ball" was deployed by N3 and Pandemic Legion. The lack of advanced notice for their pilots meant that this fleet was smaller than usual. Seeing the opportunity, CFC and Russian forces jumped in with a large contingent of Dominixes, Dreadnaughts and Titans. The fight is ongoing with both sides banking on their European, and soon North American, players returning from work to bolster their forces. 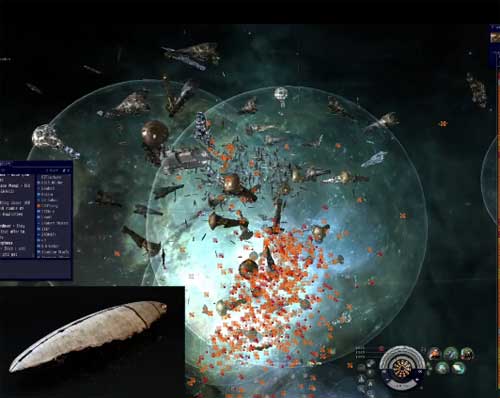 As of this writing, there are over 30 N3/PL Coalition Titans downed with CFC/RUS Alliance down over 15 Titans.  With over 4000 players involved in the battle and hundreds of players watching on Twitch, this has the makings of an epic in the making for Eve Online… and the battle is yet to be over!  For ongoing stats on it, go to zKillboard.com

UPDATE (01/30/2014): From official EVE Online press release, we received some incredible final stats regarding this battle:

For a recap of events, check out the news at http://community.eveonline.com/news/dev-blogs/the-bloodbath-of-b-r5rb/