Here’s what happened last year, from A to Z…

The DSi: it will play MP3s and has a digital camera!  It will also allow for user-generated content.  A shame it comes at the expense of GBA backwards compatibility and region-free gaming.

Braid fires up the charts and the indie game scene:

Winner of our prestigious Game of the Year Award, Braid was a huge sleeper hit and proof positive that you don’t need a big budget to make a great game.

Capcom takes retro to the next level:

The Mega Man, Commando, Bionic Commando, Street Fighter, 194X, and Resident Evil franchises were all on the receiving end of retro makeovers or re-releases in some form or another in 2008. 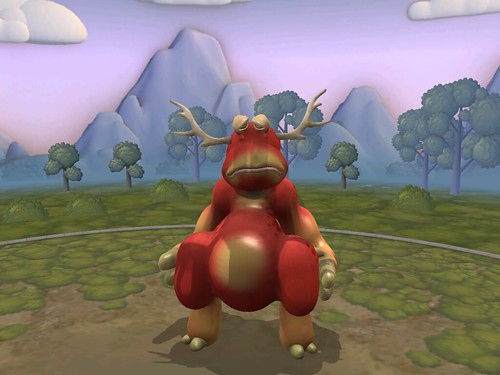 Spore, winner of TGR’s Best Strategy/Sim Award, had a resistance movement that succeeded in giving the game an average of 1-star on Amazon due solely to DRM issues.  You could only install the game three times before the disc would become invalid.  For shame.

Just about everyone thought E3 ’08 was terrible. Where the hell were Brutal Legend, God of War 3, Ico 3, Uncharted 2, Ghostbusters, and a new Zelda?  Why did Nintendo even bother to show up this year?  Was Wii Fit the best they had?  I mean, c’mon.

Fallout 3 proves those Oblivion guys are more than a one-trick pony:

Oblivion was one of those "Titanic" releases; something praised to the end’s of the earth upon its release. Taking what was great about Oblivion and combining it with what was great about the earlier Fallout games, Bethesda created a best of both worlds scenerio that few of us could have envisioned.

It’s about time you can play a Grand Theft Auto game as a nice young man.  Well, relatively nice anyway.  I hear he likes dogs.

Home: stand in line and talk to strangers.  It’s sort of like the videogame equivalent of waiting at a bus stop.

iPhone takes on the DS and PSP in the handheld gaming arena:

Apple opened up the iPhone platform for developers of all sorts of applications, including games. With its relatively powerful processor and innovative input methods, this thing could emerge a contender in handheld gaming.

Jack Thompson leaves us in peace:

This wacko finally sees justice in court: his own disbarment.

Karaoke games strike with a vengeance:

Taking a cue from Rock Band’s vocal part, Disney Sing It, Boogie SuperStar, two Karaoke Revolution: American Idol games, Lips, and over A DOZEN SingStar releases all threw the mic at us and screamed, "Sing!" in 2008.

LitteBigPlanet, at first glance, may look like a simple platformer with a level editor, and in essence, that’s what it is.  But when it contains the most in-depth level editor gaming has ever seen, it’s a whole other ballgame.  Creating your own objects, goals, story, environments, and, to a lesser extent, music, LBP gives an unprecedented amount of creative freedom to the gamer.

The Runner-up for our prestigious Game of the Year Award, MGS4 wraps up every loose end a series based on loose ends has come up with.  Sure, this may involve watching it as much as playing it, but we didn’t seem to mind as the watching was surprisingly involving and transitioned eloquently into the game.  We love MGS, but Kojima is ready to do other things, and if he can make MGS make sense, he can do anything.

It seems that Nintendo couldn’t keep consumers off of their products if they tried. The Wii, DS, Wii Fit, and games such as Mario Kart were perpetually sold out, especially coming into the holiday season. The $90 Wii Fit could be spotted on eBay for up to $150!

Only on 360 – Microsoft’s strategy with exclusive DLC:

In an effort to corner at least part of the digital distribution market, Microsoft has made a habit of sealing exclusivity deals for multi-platform games’ downloadable content. A few notable examples in 2008: GTAIV, Tomb Raider: Underworld, and Fallout 3.

Essentally a digital pocket-book of puzzles, Professor Layton and the Curious Village ended up being among the best DS games and best puzzle games of 2008.

Gamers and critics alike fell in love with PixelJunk Eden’s simple, stylish visuals, entrancing music, and addicting gameplay in 2008, proving, along with many others, that downloadable games are truly coming into their own.

They fixed the guitar!  Finally, they can compete with the Guitar Hero franchise as among the best rhythm games out there.

Nine years in the making, Dyack and company’s Too Human finally hit the market in ’08. While a solid title, it received mixed reviews, primarily due to the incongruent expectations that everyone had prior to its release.

Take-Two fends off a hostile takeover:

The "evil" (as so many out there in internet land would call them) Electronic Arts began an all-out siege on Take-Two Interactive and its shareholders in February, in an attempt to gobble up the GTA publisher. EA had no luck, though, letting the offer expire seven months later with nothing to show for their effort.

Ubisoft and 1UP come to blows:

Ubisoft isn’t terribly fond of 1UP after their drubbing of recent games like Assassin’s Creed, and has decided to stop sending them games.  They don’t send us games either, but I still gave the recent Prince of Persia a 9 out of 10.  Where’s our free schwag?

Left 4 Dead does for the zombie game what last year’s Portal did with the puzzle game: creates a brief, albiet near-perfect distillation of the genre.  Emphasizing teamwork above all else, Left 4 Dead will make you love and hate your teammates more than any game this year, possibly ever, as you share supplies while battling an unstoppable enemy.

World of Goo dazzles, gets stolen:

World of Goo, along with Braid, succeeded in bringing the indie puzzler to sleeper hit status.  A shame that it was pirated so much.

Xbox 360 gets a new dashboard:

Take that, Nintendo.  Forget the Mii; my avatar in the New Xbox Experience looks exactly like me. Fable 2 loads faster now that I can install it.  And let’s not forget streaming Netlix.

Yakuza 3 is coming out for the PS3 in 2009, and a series as story-heavy as Yakuza wouldn’t make much sense without the middle chapter. Coming out at the tail end of the PS2’s lifespan, Yakuza 2 is a collector’s item in the making.

The first year since 1999 that we haven’t had a new Zelda game.  Who knows what sorts of top-secret things Nintendo is working on.  Something awesome enough to make up for their lackluster Wii lineup, I hope.