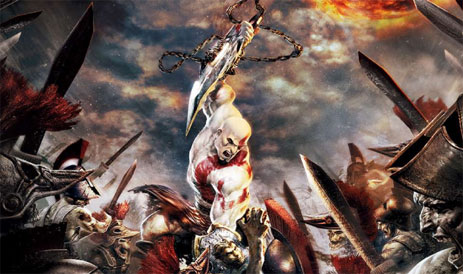 Listen: I know you’re getting all excited about God of War 3, but give me a moment to explain, and I think you’ll see reason. Let’s all come back down to Earth for a moment, take a deep breath, and forget what we think we know about God of War 3.

I would have thought that at this point in gaming history a good percentage of people would have wizened up and realized that a game is very seldom what it is sold as, but I am consistently disappointed. Game companies pay exorbitant amounts of money to marketing firms in order to trick you into believing that their latest product is all that a game could ever be and beyond.

When a McDonald’s commercial shows off a giant, delicious-looking Big Mac with crisp lettuce and juicy patties do you actually expect to receive a cheeseburger that looks like that when you get to the restaurant? Of course not, that would be ridiculous. We’ve all learned from experience that you never find out the true nature of a product until after you’ve purchased it. It’s just good business sense.

So why on Earth do we consistently allow video game makers and over-excited journalists to dupe us into believing time and again that (insert upcoming AAA game here) is going to be the next “Halo-Killer” or “system seller”?

I’m seeing the same old patterns pop up again with God of War 3, and it makes me a little queasy. Why? Because, although GoW3 is already one of the most hyped games in development, I can tell you now with relative certainty that it is going to disappoint you.

I call it Resident Evil 5 Syndrome. In the days before the demo release for RE5 the excitement was palpable. There was an electricity in the interwebs those days (and every day, literally speaking) as the gaming world held its collective breath for what it was certain would be another awesome game of historical proportions as the follow up to the highly celebrated Resident Evil 4 descended upon us from on high.

But then something happened. We all played it and realized that this was pretty much the exact same thing we’d already played, except refined and everyone freaked out over the realization that this was totally…average. Meanwhile, Capcom was scratching their collective head saying, “but I thought you guys loved this stuff!?”

We did, but the formula got stale, and the same thing is going to happen with God of War 3. Consider what we have seen thus far from GoW3. A few really cool videos have been released to whet our appetites, and everything looks fantastic, except for one thing. All of those amazing stunts, and over-the-top kills? They’re all still obviously Quick-Time-Events. Is there anything more stale and played out than Quick-Time-Events?

Will GoW3 be fun? Abso-friggin-lutely. I have the utmost faith in the developers to make a fantastic product that is not only drop dead gorgeous, but fluid and engaging as well. But that’s not enough any more. For whatever reason gamers around the world have allowed the hype to seep into their blood stream and infect their thought processes. It’s going to be an amazing game, but it’s just going to be God of War, and it’s only going to do what God of War does. It will not be a revolution.

We know from experience the developers are still chained to that original vision. All evidence supports the idea that they are not a radical studio that is going to take this series in wild new directions. It will be a very faithful sequel, but don’t expect anything more than a glossed up recreation of the original experience with some fun new tidbits thrown in for good measure.