I wasn’t planning to write about E3 in this column as that will be discussed elsewhere, but there’s one trend in the gaming industry that E3 really reminded me of. No, it wasn’t motion control. Nor was it open-world games. It was downloadable titles. Once thought to be a curiosity full of vintage classics and simple arcade games, the downloadable market has expanded to make up for at least half the games I’m looking forward to in the near future.

Last year Microsoft tried making a big deal of XBLA games with their Summer of Live campaign, but only Shadow Complex, ’Splosion Man, and Trials HD ended up delivering the goods. This year we’ve got far more to look forward to.

Limbo, a black and white 2D puzzle platformer has more atmosphere than any full-priced game I can think of on the horizon. It was the only game to actually make me shudder as my avatar was impaled by a spider 20 times his size.

Several renovations of older series are making their way to the downloadable market this year, including Sonic 4, Bionic Commando Rearmed 2, and Castlevania: Harmony of Despair.

There are some new 2D sidescrolling games like Twisted Pixel’s Comic Jumper, which looks like a solid follow-up to ’Splosion Man. Shank looks like a great mix of Devil May Cry with Venture Brothers’ art style. And Hard Corps Rising looks to be the modern Contra game we’ve always wanted.

Even if 2D sidescrollers aren’t your fare, there’s the more fully fledged Deathspank by Monkey Island creator Ron Gilbert on the way. Judging by the demo, it keeps Monkey Island’s humor intact, but mixes it with Diablo-esque dungeon crawling and loot collecting. And the mysterious Journey, ThatGameCompany’s follow-up to Flower, is one of the most visually arresting games on the horizon with its cel-shaded desert and flowing cloth.

There are two major benefits to downloadable games. Firstly, they’re cheap. Generally ranging between 10 and 20 dollars, one could buy every game I’ve listed for less than the cost of two full-priced games. As big a proponent as I am of the industry, it’s getting harder and harder to justify spending asking price on games, and I hate to see a great game sell poorly because it’s too big a financial investment for how much time one gets out of it (Silent Hill: Shattered Memories being a recent example; so good, yet so short). 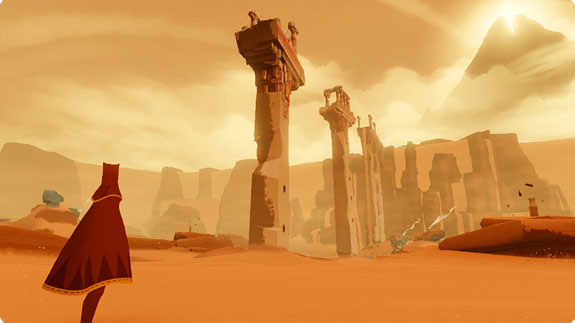 Which brings me to the second benefit of downloadable games: they’re short. Generally ranging between four and eight hours, they’re bite-sized enough that even the busiest gamers like grad students and parents will find time to finish them. Even if you’re not that busy it’s still great to have a dozen varied experiences rather than one or two longer ones.

This makes it all the more surprising that Valve, creators of one of the finest short games ever, Portal, have opted for a full-fledged disc release for its sequel. From what I’ve seen of Portal 2, they’ve made it work and somehow added enough to build upon its predecessor’s foundation without bloating it too much. Still, even if Portal 2 ends up being the greatest game ever in the universe, there’d be no Portal 2 had their not been a Portal one. And that was a released as either downloadable content or as a free bonus in The Orange Box.

Really, I could not be happier about this shift toward smaller, cheaper experiences.  I love being able to sit down and see the beginning, middle, and end of a story in one sitting and still have time to go out and play (making summer the perfect time for them to flourish). Even as an avid collector who only buys games if they’re complete with the case and manual, I can get behind digital distribution now because if I had a case and manual for every downloadable game I’ve either purchased or am planning to purchase I wouldn’t have space in my apartment to sleep. With all the talk of the industry being inundated with sequels and brands being diluted it’s easy to think that the golden age of gaming is behind us. I, however, think it’s just getting started.