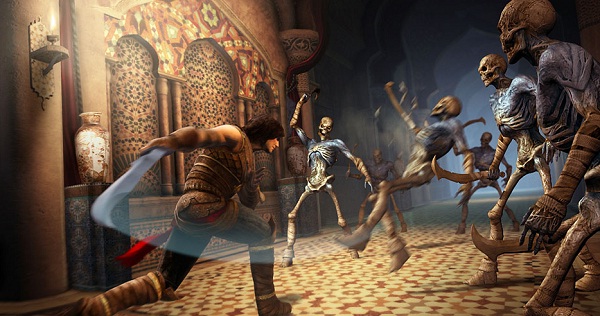 Last generation, Ubisoft created a hit when it rekindled the Prince of Persia franchise. Sands of Time struck a chord of awesomeness that carried its way through two further titles. In 2008, the French publisher looked to ride the reboot bandwagon. The company released the plainly titled Prince of Persia, a game set in a world independent of the Sands of Time trilogy. The change in art style and an open-world design failed to generate sales, leading Ubisoft to return to the ideas of its successful trilogy for The Forgotten Sands. Intricate levels, death-defying leaps, close combat and the reversal of time are all available to the Prince, yet his old moves coupled with new powers and abilities fail to fill out the whole package.

The Forgotten Sands starts off with the Prince on caravan to a kingdom lorded over by his older brother. On the way, he watches as an army descends upon his father’s palace. At this juncture, he has to work his way into the inner sanctum to find his brother while avoiding the attackers. Sound familiar? That’s because it’s a clone of the setup from the previous trilogy.

This deja vu continues for the early part of the game. Combat, abilities, levels and design are too reminiscent of earlier games to be a mistake. Luckily, as the Prince’s moves further into the palace, the levels begin to diversify themselves. Gone are the simple leaps from pillar to pole that we’ve seen time and again. Now players have to use the new ability to freeze water to create their path. It’s one of two gimmicks added to the Prince’s repertoire that forces the player to learn some new tricks.

Unfortunately, the overall platforming experience is ruined by the many (skippable) cutscenes displayed. Upon entering a new zone, the player is treated to a synopsis of the area. Included in the eye candy is the linear path the player must follow. Essentially, the short video amounts to a walkthrough. No brain function is required, just execution. With the puzzle aspects of Prince of Persia largely removed, the platforming of The Forgotten Sands features longer, more complex and more challenging sequences the closer he gets to his goal. Purists will notice the clear shift from puzzle to twitch platforming.

The rest of The Forgotten Sands does not dramatically alter the classic gameplay. In fact the other marquee feature, combat, is incredibly watered down, offering absolutely no challenge to those versed in third-person combat. Slapping the main attack button as fast as possible clears most annoyances, while an occasional dodge is suitable to slay the larger horseflies. The Prince cannot be that skilled with his blade.

The Prince in The Forgotten Sands is endowed with RPG mechanics for the first time in the long-running franchise. Players gain XP as they destroy sand minions, eventually earning enough to unlock a new ability or upgrade an existing one. Increased health, sand power, stone armor, higher attack damage and fire trail are just some of the options to bolster survivability. These choices, like the rest of the game, are uninspired, unbalanced and uncalled for. The combat is weak enough without the ability to leave a fiery wake in one’s path, or render yourself into a personal shield.

The story fairs no better. As noted, the game starts out in an unoriginal fashion. The narrative hardly advances for the first part of the game. It isn’t until the climax in the middle that the story picks up, limping along to the final battle. There would be almost no dialogue if it wasn’t for the Prince’s own snarky comments, which can be entertaining, or can break immersion. The occasional beneficial comment cannot save the the overall narrative. It is generic, taking no risks and failing to define itself from previous installments.

Clearly, Ubisoft Montreal should have added difficulty choices to the latest adventures. Combat is overly simplistic, and each platforming puzzle is ruined by the walkthrough. A harder difficulty with faster, more intelligent mobs with larger healthpools and no cutscenes would have been appreciated, likely making the game more entertaining to boot. The twitch platforming is enjoyable, but the beleaguered combat and yawn-inducing story drag it down. The RPG mechanic was a complete waste of developer time.

Writer’s Note: I feel it is my duty to highlight a particular issue that has clearly affected numerous gamers. Prince of Persia: The Forgotten Sands is not bug riddled by any means, but it does contain a game-stopping bug that hampered the timeliness of this review; a switch that is required to solve a puzzle in the Astrolab fails to appear. Ubisoft has refused to address the issue via a patch, even neglecting to give this reviewer a response to the issue. You can workaround the bug with another player’s save file.