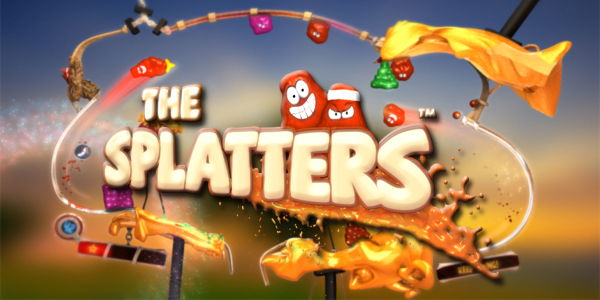 There are plenty of Physic engine puzzle games on XBLA® at the moment ,some good some not so good , THE SPLATTERS developed by SPIKY SNAIL is one of the former, it’s a new take on the genre and quite refreshing to see something different .

THE SPLATTERS are little fluid type creatures, and your goal is to shoot their liquid filled bodies at bombs placed around the stage, a simple task you may think, well we all know that isn`t going to be the case don`t we. There are many ways to do this including throwing them onto spikes or even changing direction to get to the more difficult bombs.

There are many obstacles to overcome in this game and you will have to put on your thinking cap as well, to start with game play is relatively easy and you are slowly lured into the game, with little tips like pressing the Y button, which will show you how to complete the level if you can`t figure it out, this is a nice touch, then just as you are getting used to it, on the next section you have more complicated levels and no help. 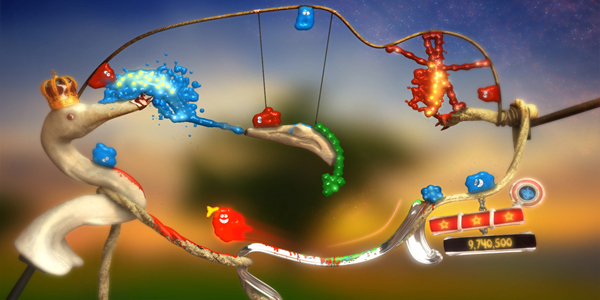 OK so there are loads of these kinds of games around, and this is a mixture of PUDDLE, LEMMINGS and half a dozen other games we have had over the years, even the voices reminds me of WORMS, therefore originality is not what this is about, even if the developers like to have us believe, in fact this is all about having fun, and as I have just spent my entire weekend hooked on this game I can guarantee fun is indeed what you will have (including a few moments of frustration).

There is the usual format within THE SPLATTERS, the better the stunts the higher your score, and attaining 3 stars on a regular basis is not particularly hard after a while, with the use of stunt combos you can create liquid blasting mayhem .

The three sections within the game offer a variety of skill, and what seems like endless levels certainly keep you occupied that’s for sure, using the left trigger helps you flip momentum so you can launch at those difficult areas, this is a handy little move and does take a while to master, it’s a bit like a time reversal kind of thing.

The controls are pretty straight forward, and can be mastered in no time, but what makes this game interesting  is that you really cannot be complacent when playing, as it isn`t very forgiving, there will be moments when you want to throw the controller because it just doesn`t look possible to complete, but the addictiveness of the game keeps drawing you back to have “just one more go”

SPLATTER TV is the spectator/sharing element of the game which is a sort of leader board with knobs on, enabling you to see how other players completed difficult sections and sharing scores. 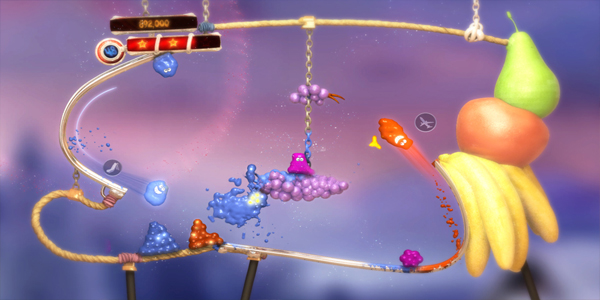 THE SPLATTERS is a visually pleasing game with a certain amount of originality to make it interesting, the game play is fluid and apart from a few minor control issues makes for a fun few hours of gaming, with plenty of levels and challenges to keep you wanting more, I think the addition of SPLATTER TV will be popular with the XBOXLIVE® community.

Overall THE SPLATTERS is another great effort by an independent company and for 800 Microsoft® points it may be a little pricey but still worth a try. 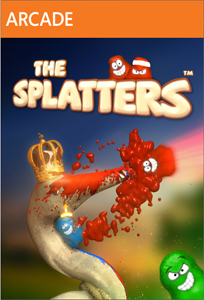