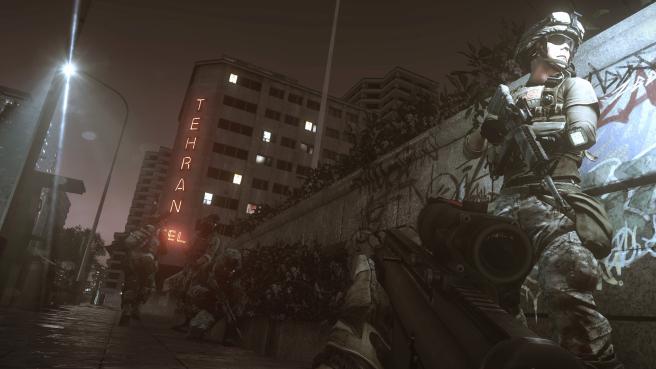 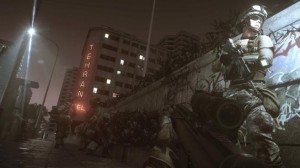 It’s here at last! The latest outing for the BATTLEFIELD series by EA GAMES and DICE, which is so popular with pc and online gamers.  This version is mainly geared up for XBOX LIVE, with the campaign thrown in to give you a taste of what is to come when you log on. Don`t get me wrong the campaign is good, if just a little bit annoying at times due to the lack of free roaming (something the online mode allows).

The visuals are superb with the new `FROSTBITE 2` gaming engine, the excellent lighting rendering and sound gives you a real feel of warfare. Ok it’s not in the league of CALL OF DUTY but it`s a pretty good attempt to tap into the money pit that ACTIVISION has created. A wise move getting BATTLEFIELD 3 out before “Call of Duty: Modern Warfare 3 ” .
Winner of over 60 awards including “Best action game” and “Best multiplayer on-line game” it is certainly worth a look, especially for the on-line play. The destruction element, meaning you can blow up or shoot anything to pieces, is a nice touch carried on from the previous BATTLEFIELD games, you can even chip away at cover to reveal enemies before you kill them. There are plenty of large set pieces during the game and the action is pretty immediate with a large variety of weapons and vehicles especially in on-line mode. One of the main things I think lets the game down is you cannot move to far away from the action as you can in CALL OF DUTY. They advertise that you can fly jets, but you actually only do this once in campaign.  Even then your only the bomber and this part is not only a bit lame but too long and uninteresting.

Be aware if you buy a second hand copy of the game, you will need a code to play on-line this is available to purchase on Xbox live (800 points or £7.99) seems like this could be the norm in the future. 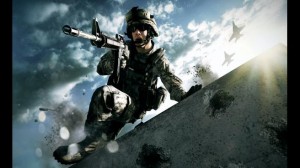 Campaign
With over 8 hours of action, this is a great intro to the on-line play (which is pretty intense). The story is set on the Iran-Iraq border where the US marines are fighting the PLR (Peoples Liberation and Resistance), which reminds me a bit of the PFJ in LIFE OF BRIAN. The year is 2014 and you are Sgt Blackburn leading a 5 man squad on a mission to locate and return a US team investigating a chemical weapons site. The mission then evolves into a hunt to track down a high value target called AL-Bashir in Tehran. So while you and the squad are investigating a bank vault, you realize that there are a number of nuclear devices deployed in various locations worldwide. So it’s off on a worldwide WMD treasure hunt traveling to Paris ,Tehran, Sarajevo, Sulaymaniyah, New York, Wake Island and Oman. There is plenty of variety and you can skip the cut scenes if the story doesn’t interest you .The visuals are realistic, the battle scenes can be pretty hectic but not particularly hard. Originality appears to have gone in favour of trying to be a C.O.D. wannabe, which is a shame .The producers have tried to make the game more cinematic overall and it is enjoyable to play. But the on-line multi play is far superior . The big question is, do we want to be in this war or the CALL OF DUTY one? (hmm choices choices) as I have not reviewed C.O.D. 3 yet so I cannot make a comparison. Don`t worry though I will.  This game does pale compared to the older versions of call of duty even so .

On-line
This is where BATTLEFIELD 3 comes to life. You can team up with friends on missions or play by yourself ( get blown away by 10 year olds who run rings around you mocking as they go!) There are a large variety of weapons vehicles, planes helicopters etc., more free roaming possibilities, even more destruction!

Flying a jet is a bit of a nightmare, so unless you’re really into the idea of being a pilot then avoid it if you don`t want to spend all your time spinning out of control or crashing (again whilst being mocked by your friends ). Try being a gunner on a gunship (loads of fun). The scoring system On-line keeps the interest up with new goodies on offer as you progress and there are a number of different classes to play in which makes for more interest. It’s all about team work, like real war (no room for loner mavericks), and this is really what makes BATTLEFIELD 3 a worthwhile experience. 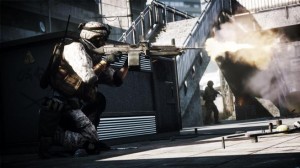 Summary
I give BATTLEFIELD 3 a rating of 8 out of 10. It’s a great game for multiplay online, but if you don`t play XBOX LIVE, then the campaign is worthwhile. But let’s face it, CALL OF DUTY has more to offer. I found many glitches within the game, slowing down of game play for one, which can be distracting and tends to take you out of the “ZONE”.  But overall a pretty good effort by EA and an enjoyable 8 hours; but not worth the money for just the campaign element. As for the online play, I highly recommend it, only I would wait to see what CALL OF DUTY has to offer first before you commit your hard earned cash .
For more info on BATTLEFIELD 3 go to www.battlefield.com